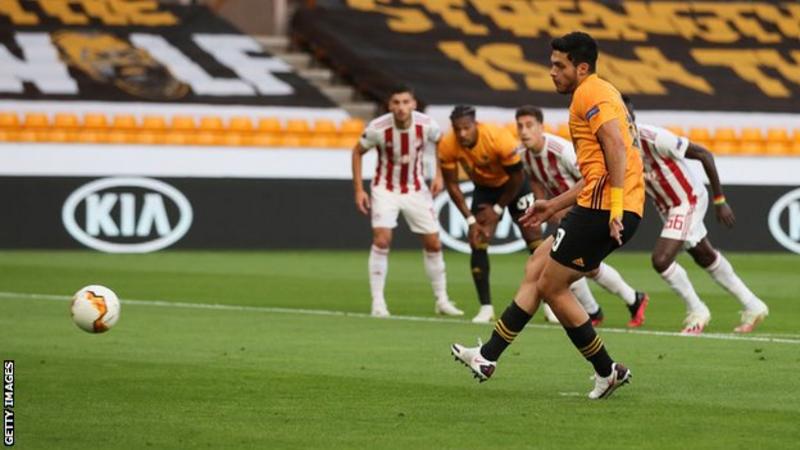 Wolves survived a nervous night at Molineux to reach their first European quarter-final in 48 years as Raul Jimenez’s early penalty earned them a 2-1 aggregate win against Olympiakos in the Europa League.

The Mexican’s precise eighth-minute effort, after Daniel Podence had been fouled by Olympiakos’ stand-in keeper Bobby Allain, was his 27th goal of the season and the earliest Wolves had scored in any game during a marathon season that began on 25 July last year and will now extend to a 59th game.

Mady Camara had a first-half equaliser ruled out after a lengthy VAR check went against Youssef el Arabi by the tightest of margins before the Moroccan sent over the decisive cross.

Rui Patricio denied Kostas Tsimikias with an excellent near-post save and in the second half, the veteran Portugal keeper produced a brilliant full-length save to turn away Ahmed Hassan’s header.

But despite dominating possession and having more shots in total and more shots on target, the visitors could not breach Wolves’ defences.

And so their marvellous European journey moves on to the ‘final eight’ tournament and a quarter-final meeting with Sevilla in Duisburg on Tuesday. 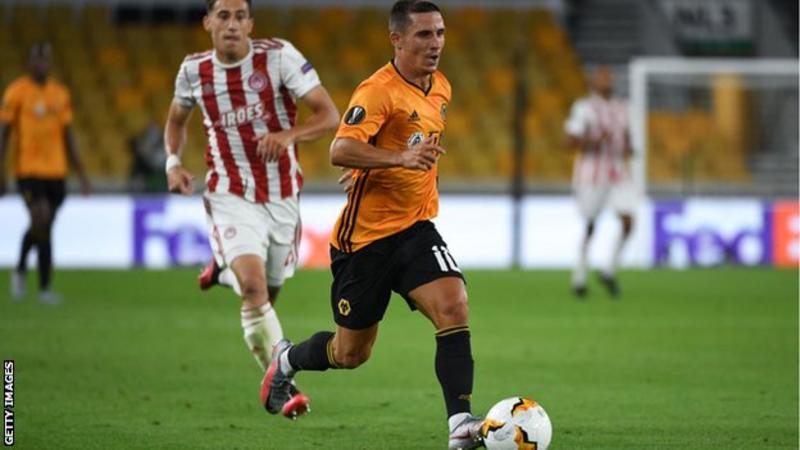 It has taken Wolves’ fans a long time to learn the value of Podence.

The 24-year-old swelled the Portuguese contingent at Molineux in January when he made his £16.6m move from Olympiakos.

Surprisingly though, he did not start a Premier League game until the defeat of Everton on 12 July.

Podence is not as big as Jimenez, or as fast as Adama Traore. But he has quick feet and can change direction very quickly.

He also is prepared to chase lost causes, which is how the home side got their penalty.

If Podence had not closed in on goalkeeper Allain as he went to make a routine clearance, he wouldn’t have been in position to get in front of the keeper, whose first touch was poor and ended with him needlessly barging Podence in the back.

In the second half, Allain made amends when Podence cut into the box from the left wing and fired a shot towards the roof of the net, which the former Clyde trainee tipped over.

In a side that spend long periods going backwards, Podence’s control on the ball was a priceless outlet, although his evening did not end well.

Wasting time after he was substituted, Podence strolled off the pitch towards the dug-out. By failing to leave the field by the quickest route, he earned himself a yellow card that rules him out of the Sevilla game.

When Olympiakos had what they thought was a first-half equaliser ruled out for offside after a lengthy VAR check, Wolves’ official Twitter feed immediately posted ‘Always liked VAR’.

It was an amusing reflection on a season in which a series of VAR decisions have gone against Nuno’s men, most notably an equaliser that was ruled out at Liverpool, after a Sadio Mane goal for the Reds that was awarded having originally been ruled out for handball.

Then there was the ‘goal’ in a goalless draw at Leicester that was also ruled out.

Given Wolves missed out on a European place via the Premier League on goal difference, there was not much sympathy for the visitors on this occasion as they cursed their ill-fortune.

After that though, it was stout defending that got Wolves through. Boly was superb at the back, although without Patricio the hosts would not have won.

Wolves know Sevilla – and then the winners of Monday’s meeting between Manchester United and FC Copenhagen – block their path to the final in Cologne on 21 August, when victory is required to get them back into Europe next season. 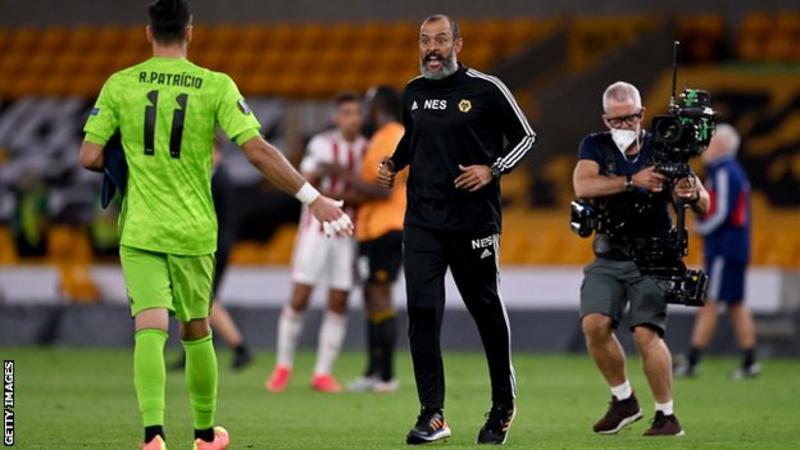 Conor Coady (Wolverhampton Wanderers) wins a free kick in the defensive half.

Raúl Jiménez (Wolverhampton Wanderers) is shown the yellow card for a bad foul.

Attempt missed. Omar Elabdellaoui (Olympiakos) right footed shot from the right side of the box is close, but misses to the right. Assisted by Konstantinos Fortounis with a cross.

Omar Elabdellaoui (Olympiakos) wins a free kick in the defensive half.

Attempt missed. João Moutinho (Wolverhampton Wanderers) right footed shot from outside the box is just a bit too high. Assisted by Leander Dendoncker.

Attempt missed. Ahmed Hassan (Olympiakos) header from the centre of the box is close, but misses the top right corner. Assisted by Omar Elabdellaoui with a cross.

Attempt saved. Ahmed Hassan (Olympiakos) header from the centre of the box is saved in the top right corner. Assisted by Konstantinos Tsimikas with a cross.

Attempt saved. Ahmed Hassan (Olympiakos) right footed shot from the centre of the box is saved in the bottom right corner. Assisted by Konstantinos Tsimikas with a cross.