Most of the 22 women who have sued Houston Texans quarterback Deshaun Watson, accusing him of assault and sexual misconduct, must publicly identify themselves after rulings by a pair of judges in Harris County, Texas, on Friday.

In two separate hearings, state court judges agreed with Watson’s legal team, which has argued that the N.F.L. star could not defend himself if the accusers, who all filed their civil lawsuits under the name Jane Doe, were allowed to remain anonymous.

Two of the 22 women voluntarily identified themselves on Tuesday, and the judges’ rulings on Friday applied to 13 of the plaintiffs. A third hearing, involving one plaintiff, was called off because she had agreed to give up her anonymity, and it appeared unlikely that the remaining plaintiffs would be allowed to shield their identities.

Though the accusers in criminal cases related to sexual misconduct are typically granted anonymity, Texas law does not permit the same shield in civil cases.

Tony Buzbee, the lawyer representing all 22 women, said in the first hearing on Friday that nine of the plaintiffs had agreed to attach their names to their accusations after being emboldened by public statements from Ashley Solis, a massage therapist who detailed her allegations against Watson at a news conference on Tuesday.

Lauren Baxley, the other plaintiff who identified herself that day, did so through a letter read by an associate.

Watson’s lawyer, Rusty Hardin, said in a statement that the accusers and Buzbee had used anonymity like a sword, damaging his client’s reputation through public statements that could not be challenged until, or if, the cases ended up in court.

Buzbee countered in a court filing that revealing the plaintiffs’ names could lead to intimidation efforts. Buzbee included exhibits that he said were direct messages to Solis on social media and emails from fans after her news conference. The messages contained vulgar and threatening language, some saying that Solis should be raped and that she had “signed your own death warrant.”

Hardin said at a news conference on Friday that he and his team of associates had limited their public statements until they gathered more evidence and that they wanted to avoid any appearance of maligning the plaintiffs.

“I am not about to accuse 22 women we have now of ill motive, of lying or anything,” he said. 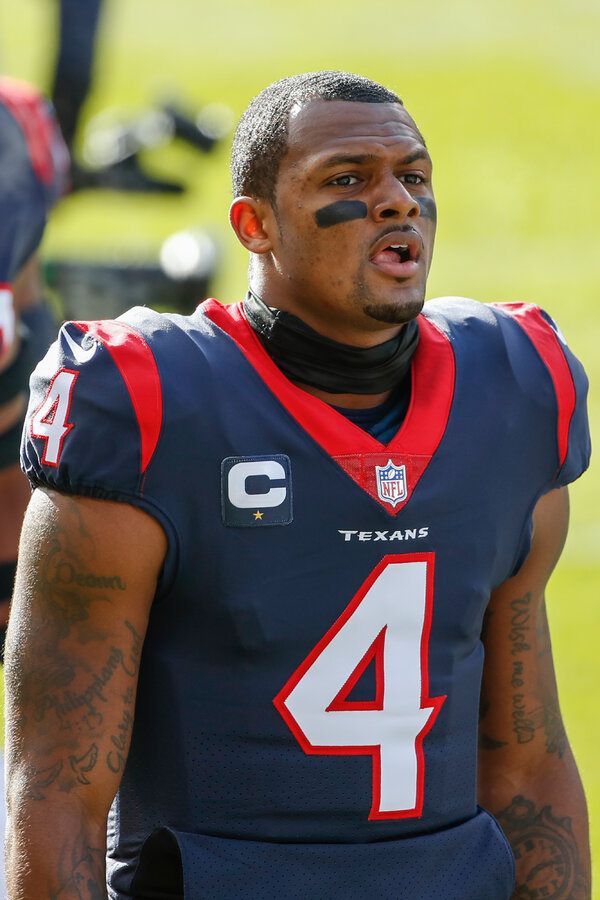 The Houston Police Department and the N.F.L. have both said that they are investigating the case. The N.F.L. has the power to suspend players found to have violated the league’s personal conduct policy.

Watson, 25, whose name has dominated this N.F.L. off-season after he requested a trade from the Texans, has not spoken publicly since March 16, when the first lawsuit became public.

Most of the plaintiffs are described in the lawsuits as massage therapists hired by Watson.

Hardin said in the news conference that Watson typically received about one or two massages a week, usually arranging them through Instagram when the coronavirus pandemic led to the shutdown of most spas.

At times, Hardin said, Watson may have engaged in consensual sexual acts with the women, but the lawyer insisted his client did not force or coerce anyone.

“Never at any time, under any circumstances, did this young man engage in anything that was not mutually desired,” Hardin said.

Hardin said he had not been contacted by the Houston Police Department or the N.F.L. regarding their investigations.

After fighting in the hearings to keep the women’s names private, Buzbee said the defense’s efforts to make them public might backfire.

“Identifying these women at this point adds even more credibility to the allegations being made,” Buzbee said in a statement. “And I am proud to stand with these brave and courageous women.”