The Australian women's Twenty20 cricket team has taken out the prestigious Don Award at the Sport Australia Hall of Fame awards, while two-time Rugby World Cup winner and former Wallabies captain John Eales was made a legend.

The national side won the ICC Women's T20 World Cup at the MCG in March, beating India in front of 86,174 people, in what was considered one of, if not the most significant moment in Australian female team sporting history. 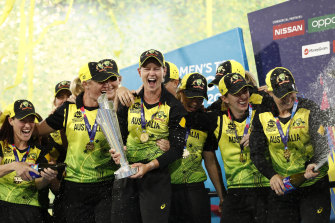 The Don Award, first given in 1998, was named after Sir Donald Bradman and recognises a current Australian athlete or team that most inspired the nation with their achievements over the past 12 months. Past winners have included Ash Barty (2019), the Socceroos (2006) and Michelle Payne (2016).

The win against India was Australia's second consecutive T20 World Cup victory, having won their fourth title at the 2018 tournament in the West Indies by beating England. That Australian team was full of stars who have helped rocket women's cricket and sport into the mainstream, including Meg Lanning, Alyssa Healy and Ellyse Perry, who missed the final through injury. 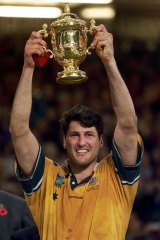 Meanwhile, Eales became the 42nd legend of Australian sport and the first rugby union player to be bestowed with such an honour. He joins names like E.J. Whitten, Ken Rosewall, Susie O'Neill, Cathy Freeman and Sir Jack Brabham in the legend category.

As a 21-year-old he was an integral part of the Wallabies' 1991 Rugby World Cup win, where Australia sensationally beat England 12-9 in the final at Twickenham. Then in 1999 he captained the Wallabies to that year's World Cup final victory at Millennium Stadium in Cardiff. The Wallabies also retained the Bledisloe Cup between 1998 and 2002 and won the Tri-Nations in 2000 and 2001, all under Eales' leadership.

Eales was famously nicknamed "Nobody" because nobody is perfect, except for maybe him.

He played 112 times for Queensland, and 86 for the Wallabies of which 60 were as captain.

A lock, Eales was known for his height, strength, skill and ability to be a weapon in the scrum and lineout, while also being a superb kick, ball-handler and leader. 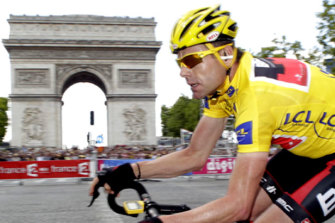 Cadel Evans is the only Australian to have won the Tour de France. Credit:Reuters

Evans was the first Australian to win the Tour de France when he triumphed in 2011. He was also a champion mountain biker and won the UCI Mountain Bike World Cup in 1998 and 1999. He is a four-time Olympian, won the points classification title at the Giro d'Italia in 2010 and won the UCI Road Race World Championships in 2009.

As a 17-year-old, Jackson led the Australian Institute of Sport team to the WNBL title in 1998 and then took all before her in the years to come. She was a three-time WNBA MVP, three-time WNBA scoring champion, seven-time WNBA All-Star and won two WNBA championships playing for the Seattle Storm, where her no.15 jersey is retired.

Mitcham sensationally won gold in the 10 metre platform diving event at the 2008 Beijing Olympics. His win prevented the Chinese taking a clean sweep in diving that year.

A 20-year-old at the time, Mitcham was trailing the leader coming into the final dive and pulled off the highest single-dive score in Olympic history to jump in front of Zhou Luxin and take the gold home for Australia.

He was a bronze medal winner at the 2009 Rome World Championships in the one metre springboard event.