In a blow to the 2019 Australian Open, US captain Tiger Woods has confirmed he wants his Presidents Cup players to compete in his Hero World Challenge in the Bahamas rather than playing in Sydney.

"I hope they play at the Hero World Challenge – that's an obvious one," Woods said in Melbourne on Thursday. 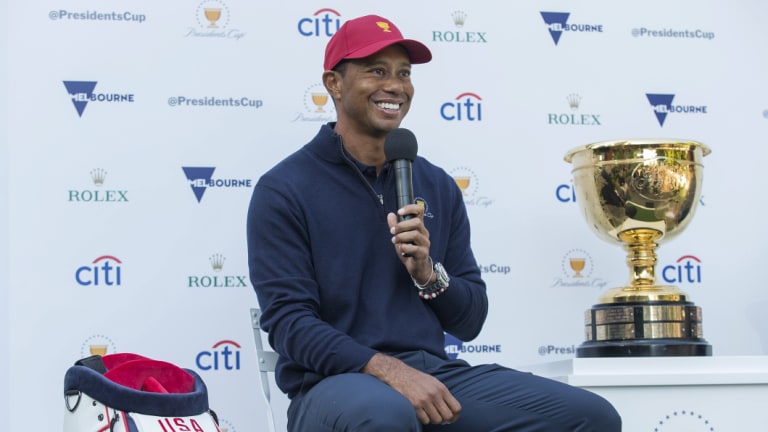 Organisers will instead need to heavily target International team players for their tournament at The Australian the week before the Presidents Cup at Royal Melbourne from December 12-15.

When the Presidents Cup was last played at Royal Melbourne in 2011, the Australian Open was also played the week before in Sydney and it attracted a field it can only dream of now due to the scheduling clash with Woods' tournament.

In that Open cast at The Lakes were Woods and fellow Americans Bubba Watson, Dustin Johnson, David Toms, Nick Watney, Hunter Mahan and Bill Haas plus their Cup captain Fred Couples and his assistants Bill Haas and John Cook.

While International captain Ernie Els says he wants his team to be playing at the Open, Woods is certain to attract his US players to the Bahamas and is intent only on ensuring they are ready to fire when they arrive in Melbourne.

For that reason his tournament may finish on the Saturday instead of Sunday to allow more time for practice after the trip to Royal Melbourne that week.

"We'll see what happens as we have to figure some of the logistical things between now and then and that's one of the reasons I'm here," said Woods.

We've got a few meetings scheduled in today, try to get a better plan going forward, so that we can get the best that we can at the Hero as well as getting everyone here from the Bahamas to this tournament rested, get them prepared and get them ready to play."

The only time in the 24-year Presidents Cup history that the US team has tasted defeat was at Royal Melbourne back in 1998.

Woods was part of that line-up, which was captained by Jack Nicklaus, and bested Greg Norman in the Sunday singles despite the International team winning by a margin of 20.5 – 11.5.

Woods said that American team weren't tournament-ready and suffered the consequences but circumstances were different now.

"It was late in the year and we didn't have the wrap-around schedule that we have now," the 42-year-old said.

"The guys took quite a bit of time off and quite frankly we weren't prepared to play, and we got smoked.

"The Internationals came out ready, prepared, played, and they drummed us so my job is to make sure that the guys are prepared, they're still playing and trying to stay fresh and competitive late in the year."