A brutal batting display from Riki Wessels helped Worcestershire to a four-wicket win over Derbyshire and qualification for the knockout round of the Royal London One-Day Cup.

Wessels smashed 11 sixes in his 130 from 62 balls before Callum Ferguson’s perfectly-paced unbeaten 103 from 95 balls eased his side to their 352 target.

Luis Reece (128) and Wayne Madsen (113) earlier put on 222 to lift Derbyshire to 351-9 but Wessels and Ferguson carried the visitors to victory with 10 balls to spare.

With victory, Worcestershire finish second in the North Group, ensuring they will play the third-placed team in the South Group for the right to reach the semi-finals.

Nottinghamshire held their nerve to beat Northamptonshire by one wicket and guarantee themselves a home semi-final in the competition. 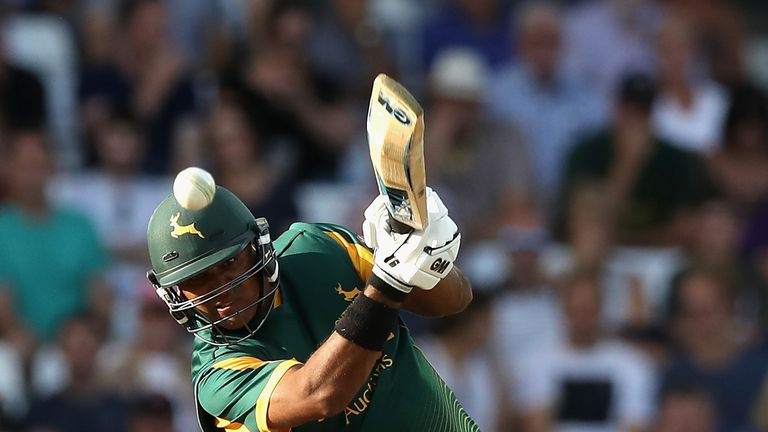 Samit Patel was Nottinghamshire’s hero as they chased down 326 to win. Patel hit a stunning 136 not out, firing a six and then back-to-back fours in the final over, with 12 runs required.

It had looked like the Outlaws were heading for a heavy defeat at 116-5 in the 25th over and, even with Patel’s fine hundred, Nathan Buck (3-60) claimed Notts’ ninth wicket to end the penultimate over. But Patel blasted Ben Sanderson (3-66) for three boundaries off the first three deliveries of his final over to win it in style.

Earlier, Alex Hales scored 36 in his first innings back since serving a 21-day ban for using recreational drugs that saw him dropped from England’s World Cup squad. Hales struck six fours in his 43-ball knock before chopping Luke Procter onto his stumps.

Durham were knocked out of the tournament as rain ruined their final group clash with Yorkshire at Headingley.

Durham had reached 182-2 in 34.2 overs when the weather intervened for a second time shortly after 3.30pm, with Scott Steel hitting 68 and Alex Lees 51 not out against the county he left late last summer.

Unfortunately for the visitors, however, they were unable to get back onto the field and had to settle for a no result and a point, which was not enough to secure a top-three finish in the North Group.

It means that Lancashire qualified for the knockout rounds later this week in third place behind Worcestershire and Nottinghamshire.

Leicestershire beat Warwickshire by 36 runs in a dead rubber final group game between the two teams at Grace Road.