PHILADELPHIA — Jean Segura scored Ronald Torreyes with an infield single in the 10th inning for his second straight game-ending hit and the Philadelphia Phillies got a third consecutive walk-off win with an 8-7 victory over the Yankees on Saturday.

Travis Jankowski led off the bottom of the inning against Aroldis Chapman (4-2) by reaching on the pitcher’s error. Jankowski bunted to the left side of the mound, and Chapman fielded the ball, checked Torreyes at second base, then hurried a throw high to first. Torreyes, the designated runner, advanced to third.

Odubel Herrera popped out, then Segura hit a hard grounder to third baseman Gio Urshela, who dived toward the line to catch it but couldn’t relay the ball home ahead of the sprinting Torreyes.

Segura hit a two-run single off the wall in left-center Thursday to wrap a 4-3 win over the Braves. Luke Williams’ homer in the ninth on Wednesday sent the Phillies to the first of their three dramatic wins.

Sanchez hit a solo homer and had an R.B.I. single, and Rougned Odor also went deep for the Yankees, who have lost six of eight.

Chapman, the Yankees’ closer, lost his second consecutive outing. He gave up two homers in his team’s 7-5 loss at Minnesota on Thursday.

The Phillies scored four runs in the first against Jameson Taillon, who recorded just one out before being lifted. After three singles to open the game, Harper followed with a two-run single to center. Two batters later, McCutchen hit a sacrifice fly, and Taillon’s day was done after surrendering Bohm’s RBI single. 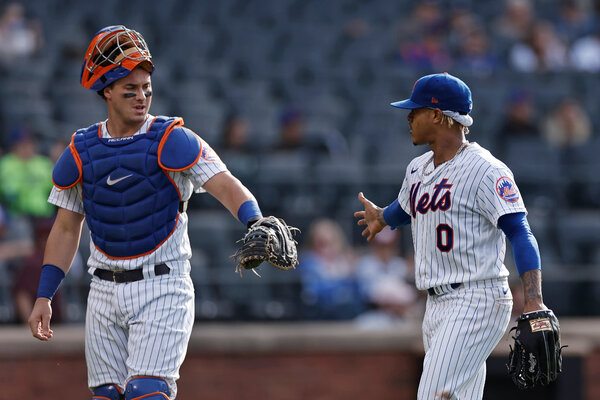 Stroman (6-4) pitched six and a third innings, allowing six hits and walking one while tying a season high with eight strikeouts.

“He was nasty,” Mets Manager Luis Rojas said. “Everything was moving the right way. He had good command of his stuff.”

Stroman lasted at least six innings for a career-high seventh straight start and beat San Diego for the second time in seven days. He also allowed a run in six and two-thirds innings Sunday in San Diego, and his teammates gave him a wrestling championship belt awarded to each night’s player of the game.

“Just trying to celebrate all victories, all blessings,” Stroman said. “So, I was lucky enough to win pitcher of the game today and this is what we get to rock for the day.”

Stroman took a shutout into the seventh until Fernando Tatis Jr. hit his 18th homer to open the inning.

Tatis moved into a tie with Atlanta outfielder Ronald Acuña Jr. for the N.L. lead in homers.

Aaron Loup finished the seventh and Seth Lugo struck out Manny Machado with a runner on to end a hitless eighth.

Edwin Diaz converted his 12th save in 13 chances, with Lindor converting the final out at short with an off-balanced throw on a grounder that was deflected by Diaz.

“We knew what we were capable of from the very start,” Stroman said of the Mets’ starters. “So, it’s just of going out there. I think between staff, between players, we have a great combination of guys. There’s so much flow of information happening. We’re sharing ideas, we’re sharing how each other pitches and prepares.”