The Yankees ended their pandemic-shortened season with a 5-0 loss to the Miami Marlins in the Bronx, but the result wasn’t nearly as meaningful as three other matters that were resolved on Sunday.

Most important, the Yankees found out where they were flying on Sunday night for the first round of the playoffs: Cleveland.

The other two issues involved personal accolades for Yankees stalwarts that carried the team through its many seesaws this year: Infielder D.J. LeMahieu won the American League batting title with a major-league-leading .364 average, becoming the first person to claim undisputed batting titles in both leagues. And first baseman Luke Voit won the home run title, finishing with a major-league-best 22.

“The goal is to keep it going in the playoffs,” Voit said.

To that point, Voit and the Yankees (33-27) learned on Sunday evening that they would be facing the fourth-seeded Indians (35-25) in the best-of-three playoff round added for this unique season.

Game 1 on Tuesday will be a matchup of two of the best pitchers in baseball: The Yankees’ Gerrit Cole (2.84 earned run average) and Cleveland’s Shane Bieber, the presumptive A.L. Cy Young Award winner who led the majors in wins (eight), E.R.A. (1.63) and strikeouts (122).

By dropping six of their final eight regular-season games, the Yankees lost their chance to host the first round at Yankee Stadium, where they were 22-9 this season. The Yankees did avoid dropping to the A.L.’s eighth seed, which would have pitted them against the top-seeded Tampa Bay Rays, when the Toronto Blue Jays lost their regular-season finale to the Baltimore Orioles.

Instead, the Blue Jays will get that honor, while the Yankees secured the fifth seed.

Because this year’s regular-season schedule featured only regional play, the Yankees and the Indians, an A.L. Central team, did not play each other as they usually would have. The last time the two teams faced off in October was in a 2017 A.L. division series, when the Yankees prevailed, 5-2, in a winner-take-all Game 5.

So much has changed with both teams since then: Yankees Manager Aaron Boone was an ESPN broadcaster; Gio Urshela, now a Yankees standout, was on Cleveland’s roster as a light-hitting, defensive-minded third baseman; Cole was a Pittsburgh Pirate and LeMahieu was with the Colorado Rockies.

The Yankees, though, haven’t played the way they should of late. This season, they looked like a juggernaut in some stretches but like a car with a few flat tires in others. In the final week, they looked more like the latter, with sound defense and trademark power largely absent.

“We have the best team in the league still,” the normally soft-spoken LeMahieu, 32, said. “We’re definitely the most talented. I don’t know why it was so up and down. I’ll chalk it up to 2020, and I know in the playoffs we’re going to be extremely focused and ready to go.”

The Yankees will need LeMahieu to be just that against the Indians, who finished the season with the best E.R.A. (3.29) in the A.L. Last year, he hit .325 during the Yankees’ playoff run, which ended two wins away from the World Series.

During his two seasons with the Yankees, LeMahieu has been perhaps their most irreplaceable player because of his defense, versatility and hitting. On Sunday, he became the first Yankee to win a batting title since Bernie Williams in 1998. LeMahieu won the National League batting title with the Rockies by hitting .348 in 2016.

There is some debate over whether LeMahieu is the first or second to claim batting titles in each league. The Elias Sports Bureau, the official statistician of Major League Baseball, credits Ed Delahanty as the 1899 National League batting champion for his .410 average with the Philadelphia Phillies and the American League winner in 1902 for his .376 mark with the Washington Senators. But some researchers consider Nap Lajoie as the 1902 winner with a .378 average because of a different standard at the time regarding at-bats needed to qualify for the award. 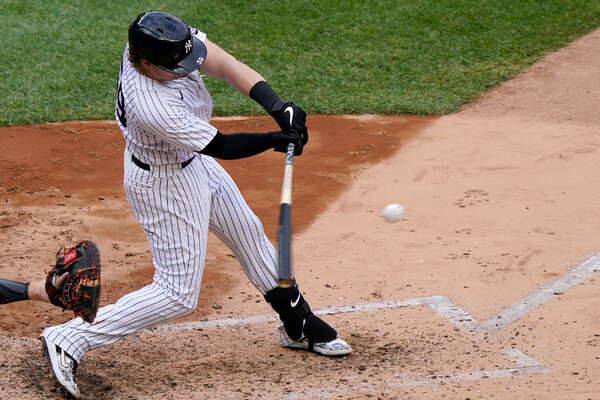 Voit, 29, who produced at the plate despite a nagging foot injury all season, is the eighth Yankee to lead the major leagues in home runs, and first since Alex Rodriguez did so in 2007 with 54. Among the others: Mickey Mantle, Joe DiMaggio, Lou Gehrig and Babe Ruth — all Hall of Famers.

“Our neighbor growing up had a huge, life-size poster of Babe Ruth that we had in our basement that he gave to us,” said Voit, who grew up outside St. Louis and was acquired by the Yankees from the Cardinals in 2018. “So I’ve always admired the Babe. I love ‘The Sandlot,’ the great Bambino, so it’s just awesome company. That guy hit, like, 700 home runs, so that means I’ve got to start hitting 150 a year to catch up to him.”

Even though it was only over 60 games, LeMahieu and Voit were clearly proud of their accomplishments. LeMahieu said he wished he had gotten to do it over 162 games, and with fans in the stands.

Boone said the Yankees wouldn’t even be boarding a plane on Sunday evening to play in the postseason without the performances of LeMahieu and Voit this season.

“We’ve had a week where we haven’t played our best baseball and we’re struggling a little bit, but I know what we’re capable of,” Boone said. He added later: “We’ve got an amazing opportunity. We hold the bat, we hold the ball and we hold the pen, so we can write the story.”