Some of the best horror movies don’t merely scare you. They deliver scenes that are irrevocably burned into the amygdala — the part of your brain that is largely responsible for fear. With that in mind, here are five of the most disturbing scenes in cinema that you can’t unsee. 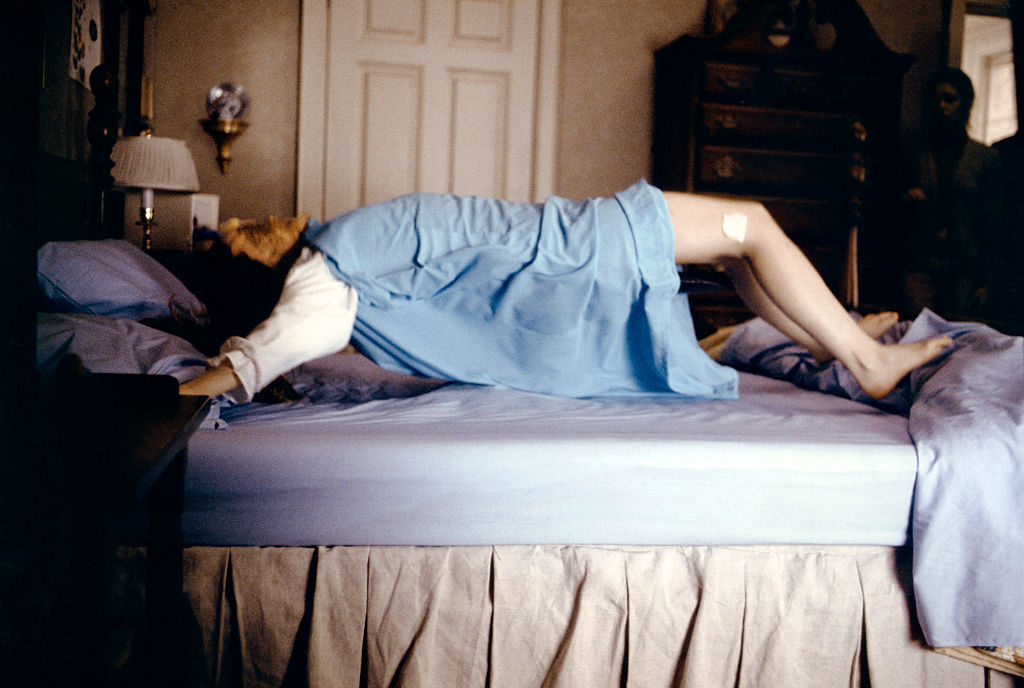 In Poltergeist II: The Other Side, the Freeling family is again plagued with spirits, and this time, Steve decides to drown his sorrows in a bottle of tequila. What’s more, he goes for the gusto and downs the worm too. Big mistake.

It turns out that the worm is possessed by a malevolent force, which takes control of Steve, causing him to have uncontrollable outbursts. But, before long, he has a fit of nausea that triggers violent vomiting.

Unfortunately for Steve — and any queasy viewers — the worm has grown exponentially, and by the time he upchucks the slime-covered creature, it’s the size of a small child. It transforms into a repulsive worm-human hybrid and slithers away. A word to the wise: Any fan who watches this scene should make certain that their gag reflex is in check.

In this sci-fi flick, Jeff Goldblum plays Seth Brundle, amad scientist who cracks the code to teleportation. However, his experimentgoes awry when a housefly ends up inside the machine with him during a testrun. When Seth begins exhibiting the physical characteristics of a fly, thingsget very gross very quickly.

Seth’s girlfriend, Veronica, is horrified when he loses an ear. But what places poor Seth permanently in the friend zone is his new habit of producing a corrosive enzyme in order to liquefy his food before for eating. Seth’s complete metamorphosis into a giant insect at the climax of the film is simply unforgettable.

Don’t let the darkness possess you. Only one more sleep until Halloween…

The Conjuring scared the living daylights out of moviegoers. In it, Carolyn, a mother of five, becomes possessed by Bathsheba, a witch who sacrificed her infant to Satan then died by suicide. Enter: demonologists Ed and Lorraine Warren.

A chain of paranormal occurrences builds to a terrifying cinematicfinale. By the end of The Conjuring, the murderous Bathsheba is in fullcontrol of Carolyn, and the group decides that Ed must perform an exorcism. Thechilling setting, blood-curdling noises, levitation phenomenon, and physicaltransformation are enough to keep anyone awake at night. But what fans may findmost unsettling is that this film is based on the writings of real-lifeparanormal investigators, The Warrens.

The Exorcist is a 1970s gem that contains some of thescariest scenes to date. In the film, when Satan possesses an adolescent girl namedRegan, it’s up to Catholic priests to send the devil packing. But Beelzebubwill not go down without a fight.

Linda Blair plays the fits of rage beautifully, and the filmmakers’special effects are still believable enough to induce nightmares. From Regan’s 360-degreespinning head, to her demonic voice, to the spewing of bright green bile onto aclergyman, The Exorcist boasts some of the most haunting frights inhistory.

“HORROR AT ITS FINEST.” Welcome a new generation of evil. #HEREDITARY is Now Available on @iTunes!

There are a few filmmakers who have managed to produce sequences that can shake audiences to the core. Ari Aster, the writer and director of Hereditary did just that. The measured pacing, uncanny performances, and peculiar sound effects contribute to the horror mystery’s unique creepiness. From the beginning, the audience is made to feel anxious, even without knowing exactly why.

The film centers around the family of an odd girl namedCharlie. One evening Charlie’s mother sends her to a party with her brother,Peter. While there, she has an allergic reaction, so Pete loads her into thecar to rush home.

In the back seat, Charlie gasps for air and desperately hangs her head out of the window for relief. That is when the unimaginable happens. With her brother driving at top speeds, Charlie’s head is severed after hitting a pole. In shock, Peter drives home and goes to bed without alerting anyone.

The next morning, their mother awakens to find Charlie’s body in the car. Without warning, the audience is blindsided by an image of Charlie’s head on the side of the road, and covered in insects.

The buildup, action, and aftermath of the beheading add upto one of the most unnerving sequences in cinematic history. It occurs in thefirst third of the film, but lingers top of mind for the duration, with the potentialto stick with viewers for a lifetime.