Remember Laura and Aladin Jallali? The two appeared on 90 Day Fiance: The Other Way and had a pretty rocky relationship. They argued about everything from finances to sex. After the season, the two unsurprisingly called it quits. Now, Laura is reportedly already seeing someone new and he’s even younger than Aladin. 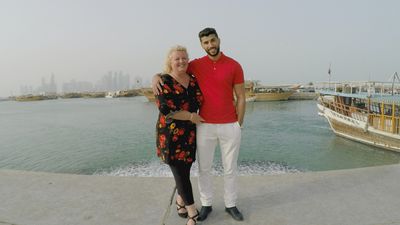 RELATED: ’90 Day Fiance’: Will Babygirl Lisa Hamme be on ‘The Other Way’?

Laura and Aladin rushed into marriage. After only nine days of knowing one another, they decided to tie the knot. Laura thought that getting married quickly would strengthen her relationship with her beau. But the two had too many differences to overcome. Not only was the age difference a problem, Aladin was 29 and Laura was 51 at the time, they had a number of cultural differences.

Aladin did not believe in using sex toys in the bedroom so he was greatly offended when Laura would constantly suggest them or bring them out.

The two also had a hard time getting their families to support the union.

At the reunion special, things between Aladin and Laura had gone majorly downhill.

Guess what is back starting Monday morning? Yah baby, 90 days the other way MARATHON! TLC wants to hear from you ! Tag @90dayfiance with your version of pillow talk about these couple and it might be shared on Mondays marathon ❤?? #tlc #90daysfiance #loveabroad #tlc_de #90daystheotherway #pillowtalk NB check out my story to see some interesting fun facts

RELATED: ’90 Day Fiance’: How Does David Murphey Have So Much Money to Spend on Ukrainian Dating Sites?

“I want to fight for my marriage,” Laura said on the show. “I love Aladin and I thought he truly loved me…I don’t know what’s happened to him.”

“I truly believed and trusted him,” she continued. “I felt that our love was really real, but I don’t know. I just don’t know. I really thought he loved me. I really, really did.”

Laura alleged that once she ran out of money, Aladin wanted nothing more to do with her.

“I have run out of money,” she said. “And I have told him that I’m not going to be able to pay for the rent anymore. My pension has been cut.”

Aladin claimed that the split had nothing to do with money.

On a recent episode of  90 Day Fiancé: Self-Quarantined, Laura revealed that she has found love once again.

RELATED: ’90 Day Fiance’: Ash Naeck Admits That He and Avery Warner Are No Longer Together in Instagram Comment

“I did actually end up meeting someone online. We just really connected,” she said. “Tony lives in California and is in dental college. He is 25 and very delicious to look at. I actually worry that Tony is too good to be true.”

To prove her relationship was real, she FaceTimed with her beau during the episode.

When she asked why he was interested in someone so much older than him, Tony gushed about how much he liked her.

“I don’t even understand why this is a question. I love talking to you,” he said. “I love your mind. It’s just a special connection, my love muffin.”

The two plan to meet up once the COVID-19 restrictions are lifted.

“After this all ends, you and I, I feel like it’s just going to be our time, love muffin,” Tony said.

Now that she is in a new happy relationship, Laura can see that Aladin may not have been in their union for the right reasons.

“Last year I married my young, hot Tunisian Aladin, but shortly after, he asked me for a divorce,” she said during the episode. “It really shocked me, but looking back now, I can’t help but feel Aladin was definitely using me to come to North America.”