Two years ago, Adepero Oduye was on a visit to Africa when she found herself in a movie theater watching Avengers: Endgame. “I was in this theater in Nigeria, surrounded by people, and just completely enthralled,” she remembers. “I always had that little dream like, ‘Maybe one day…’ When you’re young — but maybe not so young — just watching the energy behind these movies, thinking, ‘Oh, it’d be so cool to be a part of that kind of project.'”

One year later, almost to the date, Oduye was cast in The Falcon and the Winter Soldier. In the series, she plays Sarah, the sister of Anthony Mackie’s Sam Wilson — the same avian superhero the actress watched inherit Captain America’s star-spangled shield on the big screen in Endgame. “I would’ve never thought, never thought,” Oduye adds.

The show, Marvel Studios’ second to stream on Disney+, picks up a few months after the events of that movie, with Sam attempting to find work-life balance between his globe-trotting outings as the Falcon — high-flying rescue missions and face-offs with super-powered terrorists — and a home life in Delacroix, Louisiana. As the series explores the man behind the wings, that’s where Sarah comes in.

“This is my first interview regarding The Falcon and the Winter Solider, so thank you for ushering me into getting to talk about this awesome project,” Oduye tells ET’s Ash Crossan upon the release of the first episode. “This is all very new for me and kind of crazy… It’s a little bit surreal. I was talking to my brothers earlier, and they were like, ‘You did well, sis. You did well.'” 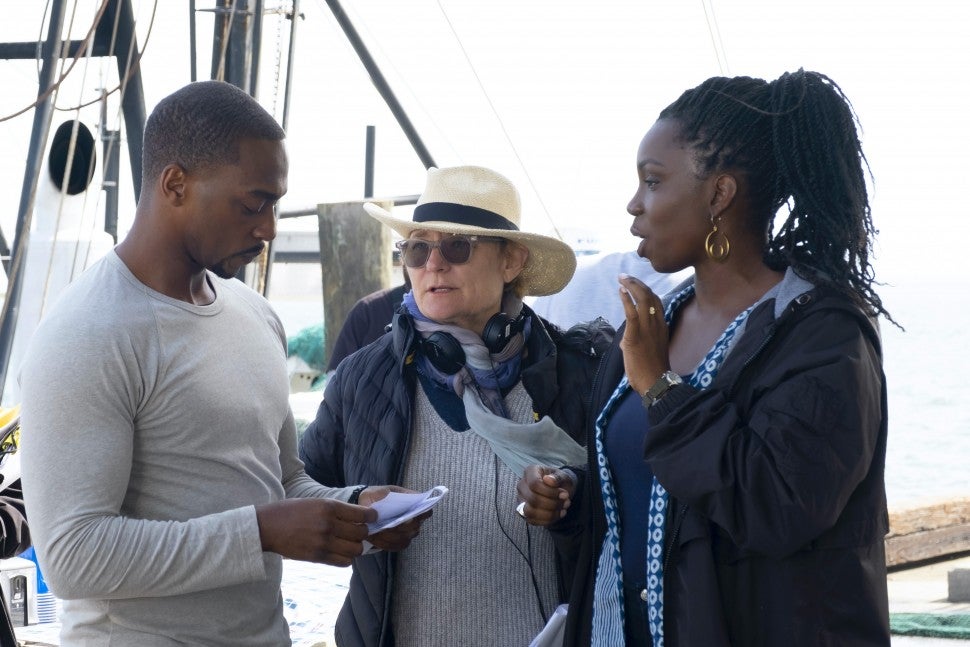 Born in Brooklyn, Oduye is perhaps best known for her breakthrough performance in the Sundance film, Pariah, for which Meryl Streep lauded her onstage at the 2012 Golden Globes. “I think I will be an old woman, and I will still marvel at that experience. The pictures are blazed in my mind, of my phone blowing up and me being in shock and, eventually, going to meet her,” she recalls. Pariah was followed by 12 Years a Slave and When They See Us. “I do love drama and intense, gritty dramas — that’s my thing.”

Which makes The Falcon and the Winter Solider the Venn diagram center of what Oduye’s does and what she’s dreamed of doing. (She singles out Black Panther as her favorite MCU entry, not least of which because she’s worked with both Danai Gurira and Lupita Nyong’o.) Amid all the super-heroics, Sarah Wilson is a put-upon single mother struggling to keep her family’s fishing company afloat in a post-Blip recession.

Unlike other MCU inductees, there wasn’t a ton of comic book backstory for Oduye to pull from in bringing Sarah to life. Instead, she took what she learned on the Internet and what was in the scripts and focused on building out the relationship between Sarah and Sam with Mackie.

“I love him. I love working with him. He’s so generous, so on point, giving, and as an actor working with another actor, it just means everything,” she says. “Because, you know, he’s Anthony Mackie. He’s been around doing it wonderfully for a very long time! I’ve known Anthony from before, but to get to work with him in that space, he’s carrying so much. For him to be just generous and kind and funny, it just added to the amazingness of this experience.”

Upcoming episodes are sure to test the entire Wilson family, as Sam faces the announcement of a new Captain America (Wyatt Russell) and reappearance of the villainous Zemo (Daniel Brühl) and Sarah works to keep their heads above water, financially. But throughout it all, the siblings’ relationship will remain the heart of the story.

“I definitely feel like the story with Sam and Sarah back home, where they grew up, it’s a heart in the midst of all the action stuff,” Oduye says. For her, their relationship is “deep, strong, honest and authentic. So, in those moments where it’s not always hunky-dory, they’re able to give that to each other, whatever that is, on each side. And there’s always a coming back. The love is at the core, always and forever. They’re very clear about that.”

New episodes of The Falcon and the Winter Soldier stream Fridays on Disney+.