After decades of toiling in relative obscurity, Jenni Olson is finally receiving the industry recognition she deserves. Her collection of rare 35mm and 16mm queer film prints was acquired by Harvard’s Film Archive last summer. Her films “The Joy of Life” (2005) and “The Royal Road” (2015), which both premiered at Sundance, recently became available on the Criterion Channel alongside her many short films. She was a 2018 MacDowell fellow, and is in development on her third feature-length essay film, “The Quiet World,” which received funding from the Catapult Film Fund and Field of Vision.

Now, she’s the latest recipient of a special Teddy Award from the Berlinale, which recognizes a figure “whose work has made an exceptional contribution…to queer perspectives in art, culture and the media.” Past recipients include Tilda Swinton, Christine Vachon, John Hurt, and Udo Kier.

Anyone involved in queer film over the last three decades will know Olson. If you were paying attention, you’d notice her name in the special thanks of nearly every queer film restoration or re-release from the last 30 years. Queer filmmakers may recognize her from Sundance’s longstanding Queer Brunch, which she co-founded in 1997. (With a little help from a nascent media partner then known as indieWIRE, newly established and still a daily print-out distributed by co-founder Eugene Hernandez.) She spent 11 years in distribution at Wolfe Video, where she created early LGBTQ streaming service WolfeOnDemand. She also served as co-director of Frameline, co-founded PlanetOut.com, and has published numerous essays, reviews, and academic writings on LGBTQ film.

The Teddy Award committee singled out Olson’s “decades of bridge-building work with which she has made queer film history visible and tangible.” The announcement concludes: “She draws on a queer film network she herself has strengthened and expanded over the decades with her collaborations and influence. Jenni Olson embodies, lives and creates queer film culture.”

All jokes aside, the recent rush of recognition has been very meaningful to Olson, especially for her personal filmmaking. Having showed so much of her work in Berlin over the years, she is particularly moved the Teddy, and its ability to synthesize such a singular and wide-ranging blend of advocacy, community-building, preservation, and filmmaking that can often feel overwhelming to sum up. 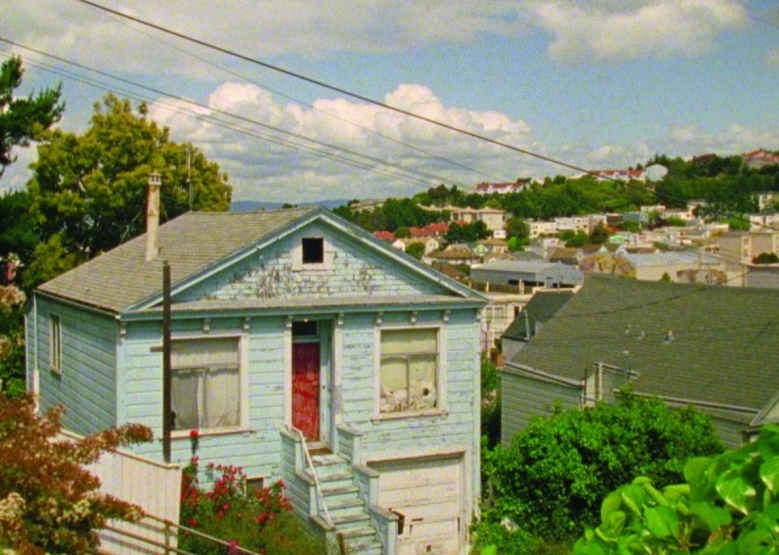 “I think a lot of my work has been sort of uncategorizable in that respect, and I’ve tried to do things that just helped further the cause of LGBT film in general,” she said. “But in my own work, as much success as I’ve had, it is intentionally not commercial. … I have never been able to make a living as a filmmaker. I have had to have other jobs … and I made my films on the side. It’s ironic because all of that industry work is part of the reason I’m being honored with the Teddy.”

Ironic, or an unfortunate consequence of the marginalization of queer film? Olson’s jack-of-all-trades approach to queer film was borne out of necessity: to make room for her own work but also to find, preserve, and foster the kind of films she wanted to see. What began as a necessary side hustle became an inspiring and creative response to being marginalized.

“I feel really lucky to have such a meaningful vocation,” she said of her non-artistic work. “It’s so important for LGBTQ people to see images of ourselves onscreen, and what a difference that has made for me personally, historically, and still today. That drives me and my work. And being a filmmaker, I know how difficult it is to be a filmmaker.”

Olson continues to have her hand in many projects. One of the things she’s most proud of recently is The Bressan Project, which is dedicated to restoring and releasing the films of Arthur J. Bressan Jr., a quite prolific gay filmmaker throughout the 1970s and ’80s who died of complications from AIDS in 1987. Olson worked with cult film preservation company Vinegar Syndrome to restore Bressan’s film “Buddies,” the first film to deal with the AIDS pandemic, which was released by a fledgling New Line Cinema in 1985.

She is currently overseeing a similar restoration process, which can be time-consuming and expensive, for two more Bressan films, “Passing Strangers” (1974) and “Forbidden Letters” (1979).

She’s watched happily from the sidelines as the films of pioneering Black gay filmmaker Marlon Riggs have received renewed interest, beginning with a BAM retrospective in 2019. Criterion released a box set of his complete works, including the controversy-stirring “Tongues Untied,” just last week. Olson says she only had the “teeny tiniest to do with” the recent Riggs revival, there can be no doubt of the warming effect of her tireless work celebrating queer cinema.

“It’s just really validating to feel like this whole time I’ve been collecting stuff that was a little eccentric a thing to do,” Olson said. “It’s like, ‘Yes! It was important!”

A selection Jenni Olson’s films are currently streaming on The Criterion Channel.

Frontier flight attendants, with the help of passengers, had to tape an unruly passenger to his seat Saturday after he allegedly groped two of the…