There was not a politician to be seen on Monday night’s science edition of Q&A, and after the heavy political period just ended how wonderful that was.

It was – hooray! – an evidence-based show, with no panellists invited to contest the notion that the world is round for the sake of balance. This was a novelty in the times we live in, and it also provided some heart and brain warming evidence that when it comes to the younger generation, the kids are all right.

There was the simple inquiry from Noah Noble: “Why do stars blink?” 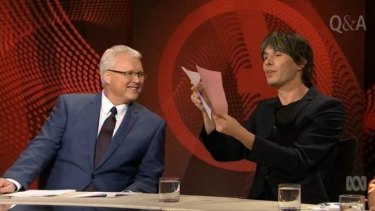 On any other program, the answer might have been: “Have you seen a Hollywood movie lately? They don’t.”

But here, the answers came from the experts, including the rock star physicist Brian Cox, who deftly re-cast the question as a nursery rhyme.

“Why do stars twinkle?

This captured the spirit of the night.

Twinkle, twinkle little star. How I wonder what you are? It was fascinating, illuminating telly.

Another young questioner, Patrick Duffy, summoned his research to ponder the future of a planet that is shovelling tonnes of garbage into its oceans with merry abandon: “Ninety per cent of plastics that have ever been made have never been recycled … have we irreversibly contaminated our oceans?”

The science on that question, and Patrick’s further worry about the health impact on humans and other species, was mixed. Professor Emma Johnston, dean of science at UNSW, called the figures “rather horrifying … we’ve been very lax about the way we use it”.

But will it kill us?

Johnston: “In 50 per cent of the fish we sampled we found microplastics in their guts in Sydney Harbour…”

But, she added, this was a very new field of research – and this was why science mattered. Don’t guess. Find out. “It’s very important that we stick to very rigorous methods.”

To that end, the program inevitability spent a lot of time debating climate change – fortunately in the absence of any “false equivalence” debaters.

There was no Malcolm Roberts – the former Queensland senator who debased and confused a previous Brian Cox appearance on the show in a performance so notoriously bad that Q&A was using it as a social media promotional tool ahead of Monday’s program.

This time around it was all left to the experts. 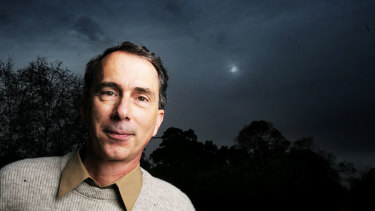 Professor David Karoly told the audience: “Alan Jones is a very well-known radio commentator but not everything he says is factually accurate.”Credit:Rob Banks

There was David Karoly, climate-change expert from the CSIRO, who many decades ago was a sceptic. Then, in the 1980s, he went hard on the research.

“I was trying to be CSI – but this isn’t crime scene investigators, this is climate scientists investigating. I’m going to look for fingerprints.”

To cut a long story short, he found them: “The more we looked, the stronger was the evidence … even then, 30 years ago, more than 90 per cent confidence that human emissions of greenhouse gases were causing that warming”.

Evidence aside, the ghost of Malcolm Roberts lingered – as did that of broadcaster Alan Jones, whose numbers on the climate change equation were quoted verbatim by an audience questioner.

David Karoly: “Alan Jones is a very well-known radio commentator but not everything he says is factually accurate.”

Tony Jones: “When he was on this program he prefaced his statements by saying I am not a scientist but…”

Karoly: “I am a climate scientist and Alan Jones is wrong.”

Everyone on this program explained why.

One panelist even committed the ultimate sin of modern television and said: “I don’t know.”

Here, Earth is the stabbing victim and Australia is the criminal claiming it’s all the problem of others behaving worse than itself by choice of weapon. “That’s the kind of argument we’re making,” Johnston said.

She suggested she had heard such arguments in federal parliament – and she was right. Others had heard them from Alan Jones, on this very program.

But as geologist and astrobiologist Martin van Kranendonk said: “If your car wasn’t doing well, would you take it to a butcher? No. You’d take it to an auto-mechanic. So for the source of data on scientific matters, I personally wouldn’t go to Alan Jones.”

One imagined the severely annoyed Alan Jones was heating up enough to increase the national temperature all on his own, though one has no evidence to prove it.