And now for something completely different on All American: tennis! And baseball!

Monday’s episode of the CW drama doubled as the pilot for All American: Homecoming, a Simone-centric spinoff that was officially ordered to series in May. As we know from the show’s official logline, Homecoming will follow Geffri Maya’s character at a historically Black college, where she and an elite baseball player from Chicago (played by Legacies‘ Peyton Alex Smith) contend with the high stakes of college sports.

But in Monday’s backdoor pilot, we watched as Simone — still a senior in high school — remained uncertain about where to apply to college, all while realizing her tennis game needs work, too.

During the hour, Simone pays a visit to the (fictional) Atlanta-based school Bringston University, which, in this alternate universe, is the alma mater of Vice President Kamala Harris, political activist Stacey Abrams and Atlanta mayor Keisha Lance Bottoms. It’s also where Simone’s aunt Amara teaches a course on journalism and activism, and Simone insists she’s only spending the weekend to see her aunt… but the school clearly grows on her, too.

A current Bringston student named Keisha (relative newcomer Netta Walker) gives Simone and Olivia a tour of campus, and Simone meets the school’s tennis star, Thea (Katy Keene‘s Camille Hyde), who absolutely knows how good she is. She challenges Simone to be her warm-up partner, and though Simone does get a couple of balls past Thea, Thea dominates most of the game. “Sorry. Thought you could hang,” Thea taunts, when Simone asks if all of her warm-ups are typically that intense. 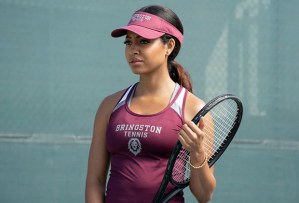 That tennis match seems to rattle Simone for much of the weekend, even as she starts to consider applying to Bringston instead of just visiting for fun. Later, in a conversation with the aforementioned elite baseball player, Damon Sims — more on him in a minute — Simone is all too aware of the heavy tennis competition she’s facing, and Damon encourages her to use that as motivation.

The next day, Thea finds Simone practicing on the campus tennis courts, and though Thea’s still got a serious catty streak, she gives Simone some advice on how to perfect her form. Black women are judged on everything the moment they set foot on a court, Thea says, and Simone can’t get psyched out so easily if she wants to be a serious contender. “Bring excellence, or don’t play at all,” Thea tells her. And later, while speaking to Aunt Amara, Simone expresses concern that her mom won’t want her to apply to Bringston, and Amara reminds her niece to put herself first when making these decisions, so that she can be the best version of herself for her loved ones.

All of this tough love seems to resonate with Simone, who seems more certain about applying to Bringston and pursuing tennis by the end of the episode. As she, Olivia, Spencer and Jordan prepare to leave campus and return home, Jordan notes that his wife looks happy — though when Simone gets in the car, Jordan’s now the one looking anxious about his and Simone’s future. (And Jordan might have good reason to worry, because Damon Sims is clearly very interested in his girl.)

As for Damon’s baseball career, that storyline actually makes up the bulk of Homecoming‘s pilot, with Damon’s MLB prospects suddenly in jeopardy when he’s spotted practicing with Bringston’s baseball team. Damon’s adoptive mother — who wants Damon to have a pro baseball career way more than Damon himself does — quickly finds a silver lining when Damon is caught practicing with the Lions, theorizing that the MLB will want him even more if they think Damon’s considering playing for a college team instead of getting drafted.

But all of this scheming comes to a halt when Amara is tipped off about a cheating scandal within the athletics department: Bringston’s head baseball coach has been knowingly enrolling his players in “paper classes,” or courses that don’t actually exist, so they can remain academically eligible to play baseball at the school while “acing” their “classes.” (Several similar scandals have happened in real life, most notably at the University of North Carolina at Chapel Hill.) 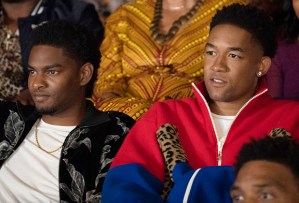 At first, Bringston’s president is content to sweep the cheating under the rug; since these ghost classes were offered to everyone, and not just student athletes, the NCAA likely won’t penalize the school for giving athletes exclusive advantages. But Amara calls out his cowardice right away, and the prez swiftly moves to open an investigation, while the baseball team’s coaching duo resigns immediately. (And in a plot twist, Marcus, the team’s assistant head coach, was the one to tip off Amara about the cheating in the first place, sacrificing his job in the name of integrity.)

After a heart-to-heart with Spencer, in which Spencer tells Damon that his next career move should be for him and not his mother, Damon makes a major announcement the next day: He won’t be participating in the MLB draft, and will instead commit to playing baseball at Bringston. Marcus will even get his job back, this time as head coach and not assistant! Yay! As Damon shares his decision during an on-campus press conference, he states his intention to bring integrity back to Bringston’s baseball program — and though Damon’s mother looks less than thrilled to hear the news, Simone finds Damon after the presser and notes that he finally looks at peace.

Oh, and an important development for the mothership series: Spencer and Olivia are finally getting together, y’all! At least, if I’m reading their dance-floor makeout sesh correctly, that is.

OK, your turn. What did you think of All American: Homecoming‘s first episode? Grade it in our poll below, then drop a comment with your full reviews!