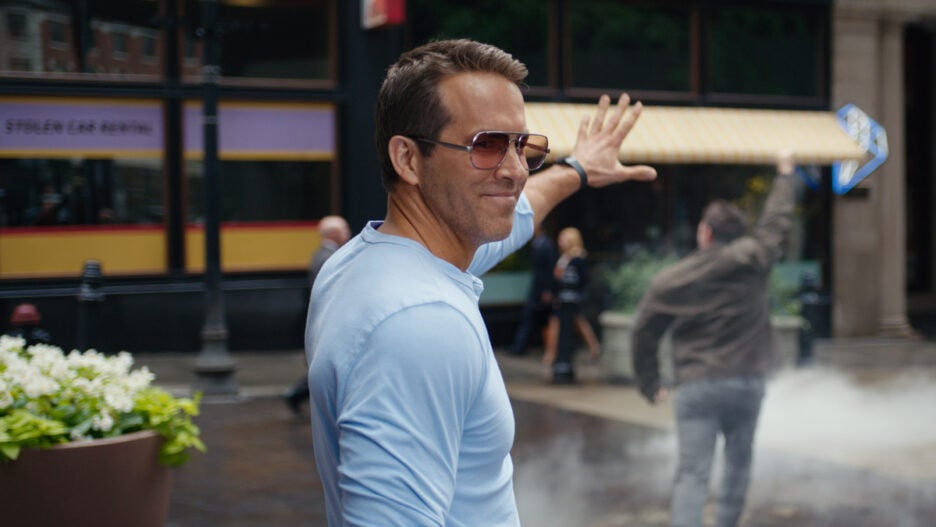 Disney’s “Free Guy” is chock-full of pop culture references and celebrity cameos. So many that you might have lost track of them. That’s where we come in.

The Ryan Reynolds-led film is directed by Shawn Levy, and while it is packed with references to actual video game franchises — like character Keys (Joe Keery)’s N7 Mass Effect” sticker on his laptop or the villainous game executive Antoine (Taika Waititi) dressing like an “Assassin’s Creed” character — but it’s not “Ready Player One” level with an almost overwhelming amount of Easter eggs.

Disney wouldn’t confirm our list of all the cameos that happen in “Free Guy,” so sorry if we missed anyone — but here’s a pretty comprehensive list of everyone who shows up in the film and what they get up to. The film comes out in theaters Aug. 13.

Warning: some “Free Guy” spoilers ahead.

Former IGN editor in chief Terri Schwartz: Schwartz plays a video game reporter who isn’t named — or even credited on the “Free Guy” IMDB page yet — who interviews Keys and his game development partner Millie (Jodie Comer) about the game they worked on before “Free City.” Schwartz also shows up at the end of the film in another video reporting about changes in the game.

If you keep a close eye on the background of the Soonami headquarters set where all the real-world game development scenes happen, there’s multiple IGN awards stashed throughout the office. It’s a subtle nod to Schwartz’ old gig (After running content at IGN for nearly six years, Schwartz moved to a gig managing editorial work at Netflix’s Geeked) at the publication.

About a quarter of the way through “Free Guy” there’s a montage speeds up time to show the world reacting to Guy’s adventures in the game. One of these reactions comes from late “Jeopardy!” host Alex Trebek, who asks a Guy-themed question to three mock contestants. More on that appearance, and how “Free Guy” star Ryan Reynolds felt about the cameo here.

A “Free Guy” production designer recently confirmed to The Hollywood Reporter that “Free Guy” does indeed have sneaky references to popular games like the “Red Dead Redemption” franchise and “Shadow of the Colossus.”

There’s also quite a few streamers that appear in the montage and they come back at least twice throughout the movie to give the audience a sense of the “real world” reaction to Guy’s attempts to break out of Free City. Here’s a rundown of who shows up:

Seán “Jack Septiceye ” McLoughlin: McLoughlin is one of several video game streamers who play themselves in “Free Guy,” and besides Ninja he gets some of the most screen time. When Jacksepticeye’s stream is shown in the film it’s a screen grab of a fake YouTube video recording of his broadcast talking about Blue Shirt Guy’s exploits in the world, instead of some of the other streamers who just show up full-screen behind a mic like you’d see on a Twitch broadcast. Like the rest of the streamers, Jack is hyped that Blue Shirt Guy starts to go rouge in “Free City.”

Tyler “Ninja” Blevins: Shawn Levy couldn’t make a gaming-inspired movie without including one of the industry’s biggest and wealthiest names in streaming. Ninja shows up throughout “Free Guy” the same way McLoughlin does except he’s not edited to look like he’s in the middle of a live broadcast and is just sitting at his gaming rig. “We should all be thinking about him,” Ninja tells his imaginary viewers about Guy.

Imane “Pokimane” Anys: One of gaming’s biggest female players was a shoe-in to show up during “Free Guy,” especially since she boasts about 8 million Twitch subscribers and 6.7 million on YouTube. Pokimane appears a few times and at one point after Guy takes the initiative to level up by helping people in Free City Pokimane has a few lines where she admits before seeing Guy, she didn’t really care about non-player characters in games and would just beat them up. Pokimane also totally thirsts after Guy, there’s a few times when she’s “live” that she mentions how hot he is. “He’s got me thinking about NPCs differently,” Pokimane said.

Lannan “LazarBeam” Eacott: Australian streamer LazarBeam is a unique voice in terms of cameos. LazarBeam has over 19 million followers on YouTube and primarily makes humorous content with games like “Fortnite” and Rockstar’s “Grand Theft Auto.”

Daniel “DanDTM” Middleton: this popular British streamer known for his “Minecraft” videos has over 25 million followers on YouTube alone and shows up a few times in “Free Guy.” Speaking of “Minecraft,” the “Free Guy” director Shawn Levy was supposed to also direct a movie about “Minecraft” but stepped down in 2014.