It’s the penultimate episode of The Amazing Race‘s 32nd season, and unfortunately for one team, the leg (and race) ended in absolute heartbreak.

As the teams drop down in Manila, Philippines, they’re shocked to discover they’ll be taking part in the first ever City Sprint — no roadblocks, no detours… no kidding! But with the final leg (and the $1M!) on the horizon, this sprint certainly won’t be a walk in the park. Which team checked in last and was cut from the competition just one leg before the finale? Let’s recap!

AND THEY’RE OFF | Teams depart Cambodia, and upon landing in Manila, must find Phil at Lapu Lapu Circle. The teams arrive at the same time, on pins and needles to hear what Phil’s concocting. He announces the City Sprint, and mouths drop when he says there aren’t any roadblocks. “This is all or nothing for all of you. If you want to be in that Final 3, you have to do what you can to stay in it,” he says. He tells the teams to travel safe and fires off a starting gun.

THE SPRINT BEGINS | Teams must find a dancing traffic director in a city that was once deemed as having the worst traffic in the world. Riley and Maddison find him first, but Hung and Chee (and the boyfriends) miss the clue handoff and must circle back! Both teams snag their clue, but the volleyballers remain in the lead. Teams must now run a 500-meter dash in some snazzy high-heeled pumps, which is a new life event for the athletes of the Race. Will, however, owns a pair of heels, while Chee admits to have walked in them before.

The next stop: Binondo Arch of Goodwill, where teams must search for a costumed lion with a clue in its mouth. Gary and DeAngelo can’t seem to find one, but after a few tries, they take first place and are off. Hung and Chee appear to be lost, which is slowly tearing me apart inside. (Won’t somebody help them find the lions!?) They ask a policeman, and Hung gives her best Simba impression to make up for the language barrier. Soon enough, they find what they’re looking for. 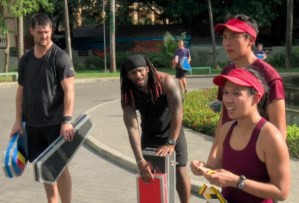 Next, at the central post office, teams must find horse-drawn carriages, then search the grounds for the ingredients to feed the hungry horses. The boyfriends get it done fastest to take the lead. They rush to the next clue box, which tells them they must identify music they’ve heard throughout their race, as a band plays live in front of them. Marked cases (with country flags representing the songs) must then be placed in the order they were heard on the race.

Chee and Hung arrive, while the other three teams continue to struggle. It’s incorrect guess after incorrect guess, and the stress is on for everyone. The boyfriends admit to just guessing at this point. Could this entire season just end right here in a stalemate?

Frustrations rise, forcing all of the teams who aren’t former NFL football players to work together. Gary and DeAngelo are shocked to see the others working together, but even working together isn’t helping anyone. Everyone re-reads the clue and realize the songs need to be placed in the correct order as heard on the race! (Doh!) The volleyballers finally get the right answer, and before they take off, they give Will and James, and Chee and Hung the right answer. The footballers throw in the towel and take the two hour penalty.

PIT STOP | Riley and Maddison clock in first, stamping their ticket to the final, and the boyfriends are right behind them. Sliding into third is Hung and Chee, leaving Gary and DeAngelo in last. The footballers are thus eliminated from the race.

How about DeAngelo’s last words, huh? (Yikes!) Are you happy with this Final 3? Sound off in the Comments!