Peacock’s new comedy Girls5eva follows a one-hit-wonder girl group from the ’90s as they try to revive their music careers twenty years later — and it also goes back in time to capture them at the height of their fame.

Episode 2 opens with a flashback to the self-styled Beyoncé of the group, Wickie (played by Renée Elise Goldsberry), starring in her own episode of MTV’s Cribs, taking us on a tour of her “purple expensive” Malibu beachfront home just as she’s poised to ditch the group with her solo album Yesternights. The montage is a hilarious distillation of Wickie’s entitled diva attitude, as well as a powerful hit of Y2K-era nostalgia. Here, TVLine Dream Emmy nominee Goldsberry and episode director Brennan Shroff take us behind the scenes of filming Wickie’s triumphant Cribs moment.

BRENNAN SHROFF | [Wickie’s] house is supposed to be in Malibu, and we shot it in Long Island in the heart of December. It was in Oyster Bay, Long Island, I think, on the north shore in winter. It’s supposed to look like sunny Malibu, and when Renée, God bless her, in that tiny outfit they put her in, was walking out to her mattress car, it started ice storming. You can’t see it in the final cut, but little pellets of ice were hitting her, and it was awful, but you can’t really tell because she does such a great job.

RENÉE ELISE GOLDSBERRY | The outfit they had me in was like this midriff with cross-ties going down my stomach, and I was walking around doing this scene, because I was supposed to be 20. And I was doing a very good job of holding my stomach in until I walked outside and that cold air hit me! [Laughs] When that cold air hit me, I was like, “I don’t care what I look like in this thing! Let me just get this over with!” [Showrunner] Meredith Scardino sent me flowers the next day because my lips were blue trying to get on that Sealy Posturepedic for Alfa Romeo. 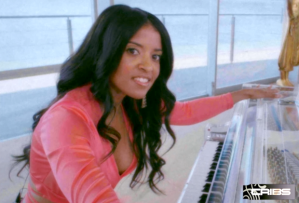 SHROFF | I grew up on Cribs. I remembered that era of MTV, that early ’90s era of MTV, because I was a teenager. I was 12, 13, 14 when that show was coming out, and I grew up in Denver, Colorado, so the idea of Cribs was just this amazing thing to me.

GOLDSBERRY | I was so glad when I read the script and they were going to take that time to start that episode with Wickie’s [Cribs episode], because it was just the perfect way to show the status drop, so you can really empathize with the status drop of the character and celebrate what was so unique about the ’90s.

SHROFF | I think the whole vibe was new money, and this woman who just got crazy rich and doesn’t have the greatest taste, so it’s very flashy.

SHROFF | I love Renée’s attitude when you first meet her in the swing. It’s absolutely perfect. She just killed it, sold it, walking up those steps. It makes my job easier. She’s super confident, she’s got her Jose Canseco movie, she’s got her solo album, she’s got all of that other stuff going on. This is the tip-tip-top of it, and she sells it. Renée knows that character. She’s great.