FOLLOWING the death of Dame Barbara Windsor last week at the age of 83, we are bringing you the film and telly legend’s story – in her own words.

In the early Sixties she began her doomed romance with the man who would become her first husband, small-time crook Ronnie Knight. 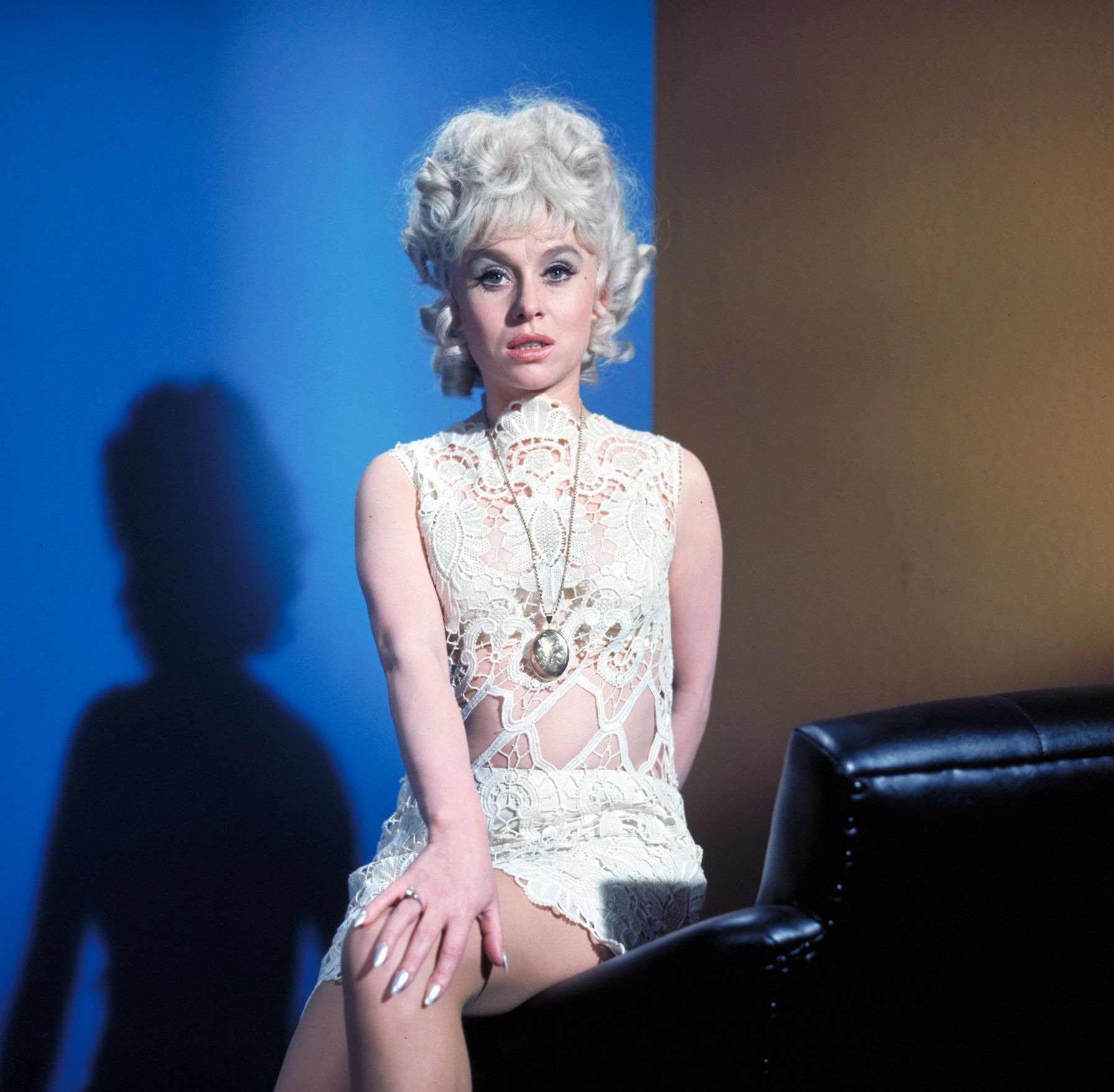 Knight, an associate of gangsters the Kray Twins, forgot to tell her he was already married and that his wife was pregnant.

Despite regretting marrying Knight, Babs tells in her autobiography how she stood by him until their divorce in 1985.

I REMAINED loyal to my husband Ronnie Knight when he was accused of murder. And he repaid me by cheating with a blonde barmaid.

I found out about his mistress at the Old Bailey, where he was on trial for the revenge killing of the man who had stabbed his brother.

As I arrived at court, a man I’d never seen before came up to me and said: “Do you know your old man’s got another woman?”
Whether he was a detective trying to turn me against Ronnie or just rattle me, I don’t know.

But whoever he was, he didn’t get any joy. I just looked at him and said: “I hope he’s got several.”

After a ten-day trial Ronnie was cleared of taking part in the killing of Alfredo Zomparelli.

That night we clung together — we had weathered the storm and not even the dark cloud of this other woman was going to spoil my ­outlook for the future. 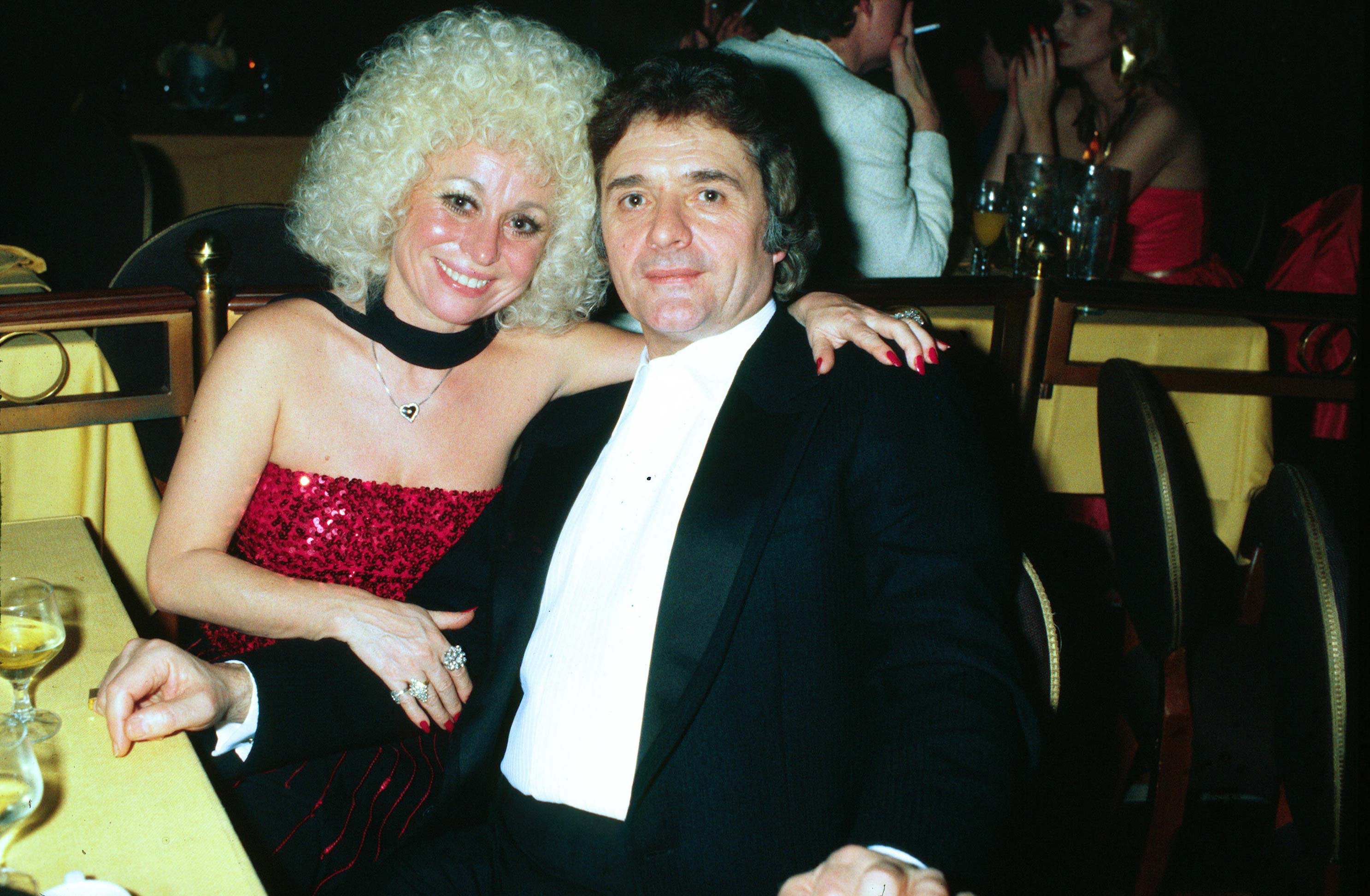 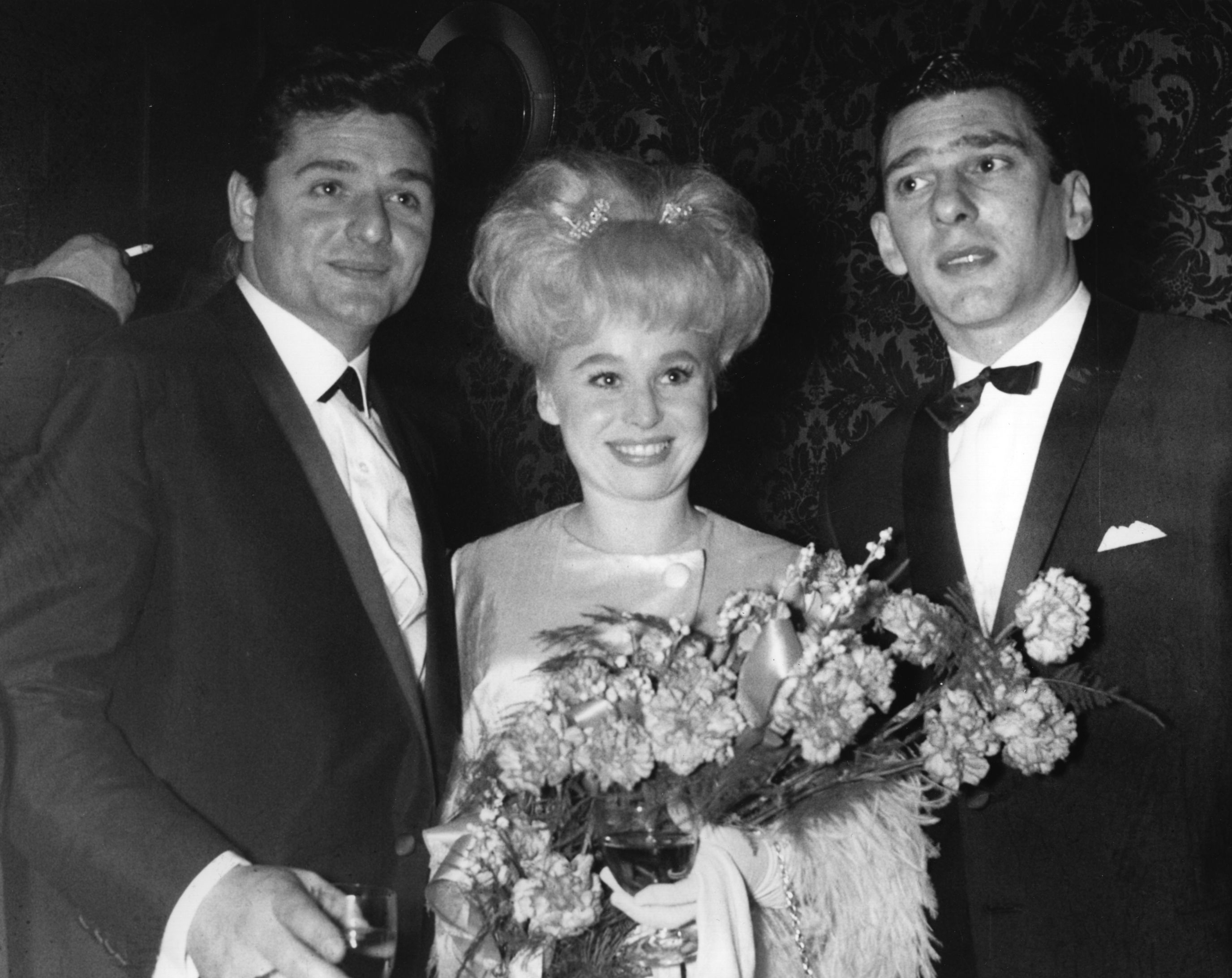 But soon after his acquittal, Ronnie came home one evening badly beaten up, refuelling my suspicions that he was leading some kind of double life.

I heard him drive into the garage, but when he didn’t appear I went to see what was keeping him and found him half-conscious in the car, blood all over the place.

I got him into the bath, washed him and was helping him into bed when the phone rang.

On the other end was a woman, crying for Ronnie. I handed him the phone. He had been drinking and could hardly speak.

Then he put the phone down. Who the hell was this woman? Was she just a bit on the side or something more than that?

I needed answers, but now wasn’t the time to ask the questions.

Obviously Ronnie had upset someone, big time. Was it the woman’s husband? 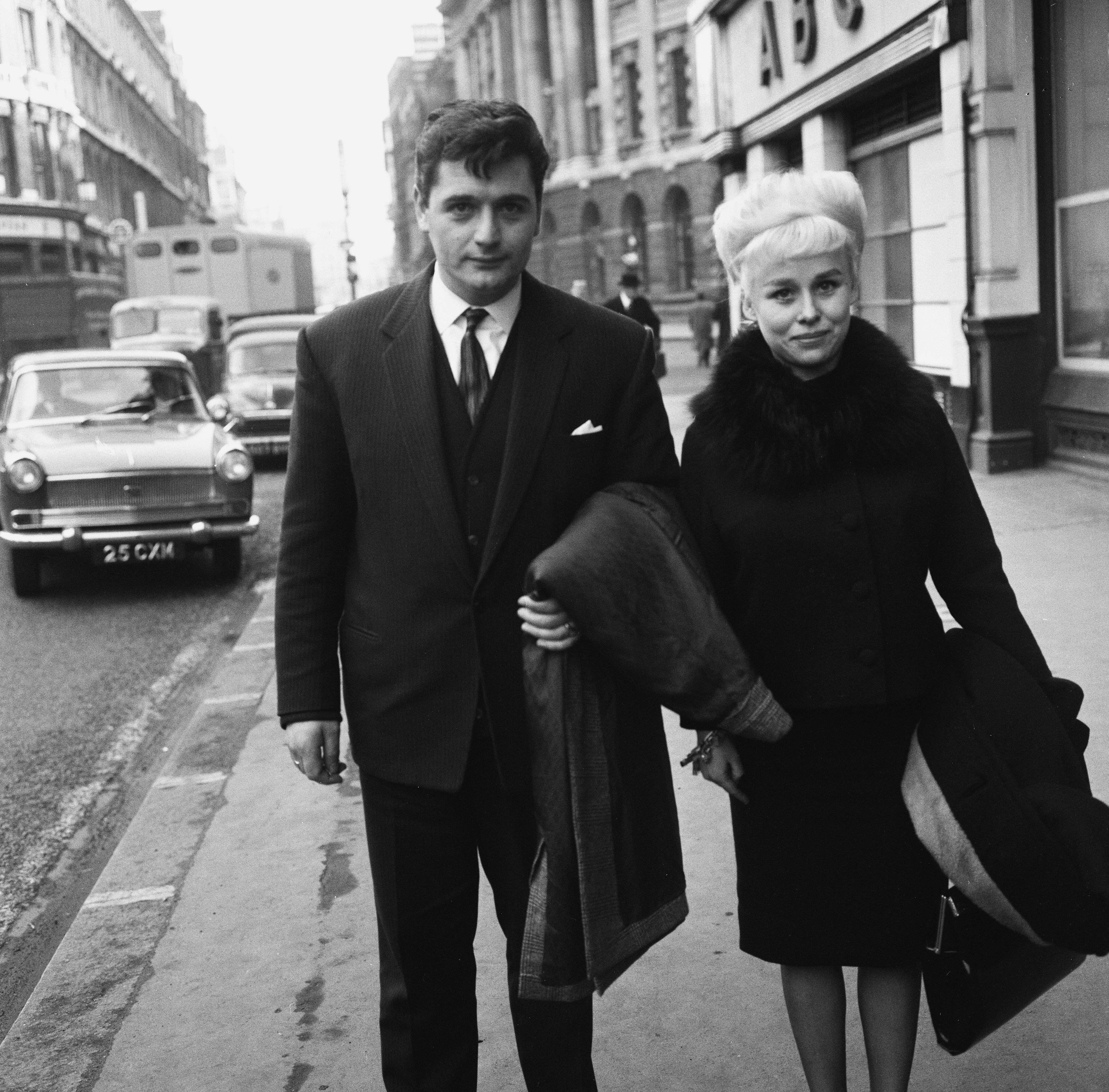 I didn’t think much more about it until six months later, when I gave a press conference in Blackpool to ­promote a new stage show, The Mating Game.

Although I had made it clear I would only be talking about the play, not about Ronnie, a Sun reporter approached me afterwards.

He asked: “Do you know that your husband is having an affair with a barmaid called Susan Haylock?”

I tried to laugh it off with a joke but I’m sure I wasn’t convincing.

The next day The Sun’s front page carried a big picture of Ronnie and the words: “I do employ a girl called Susan Haylock, she’s a barmaid. But Barbara is the only one in my life.”

When The Mating Game finished I decided to fly to Spain to sort ­everything out with Ronnie, who was staying at our home out there.

I needed to know if we had a future together or not. 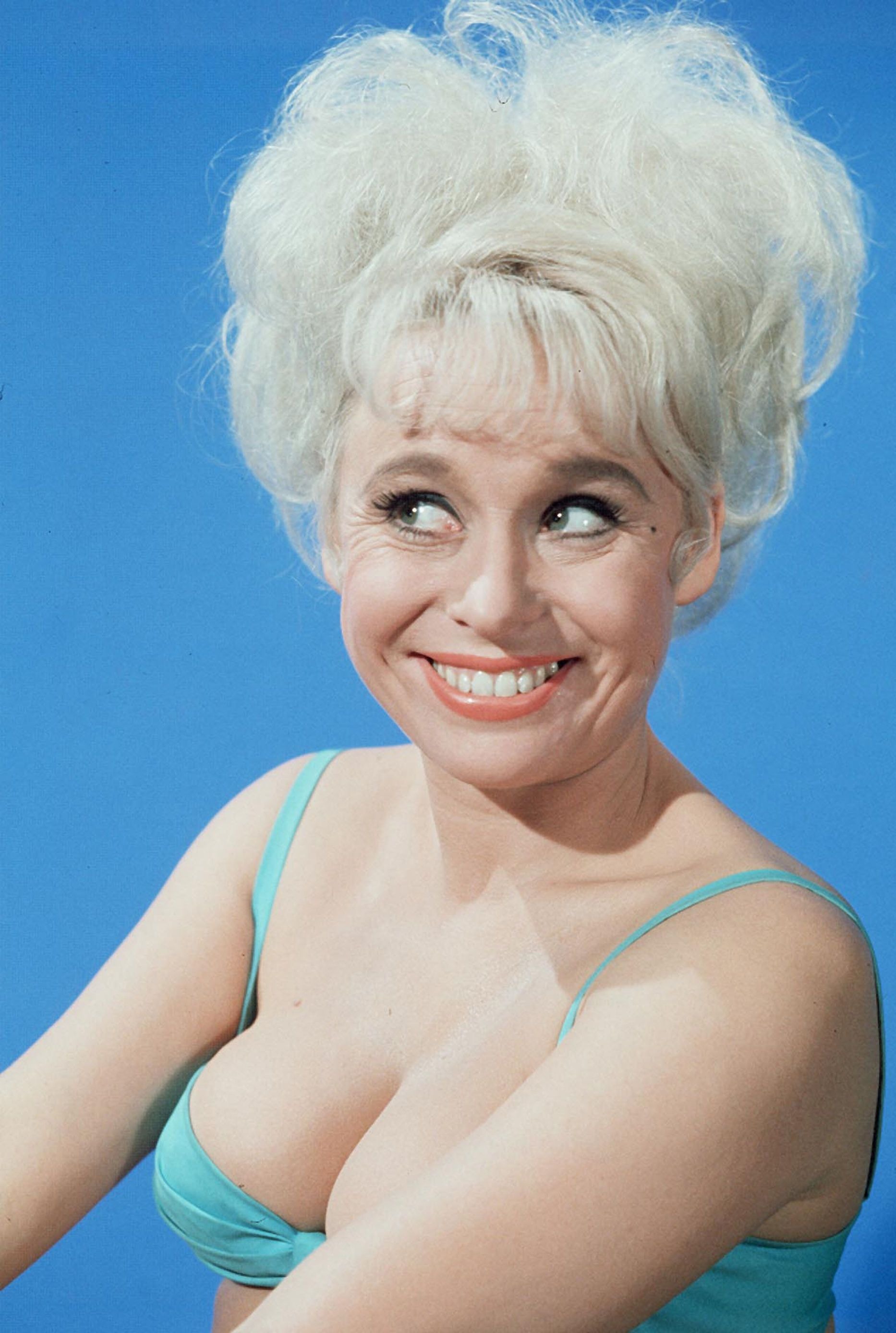 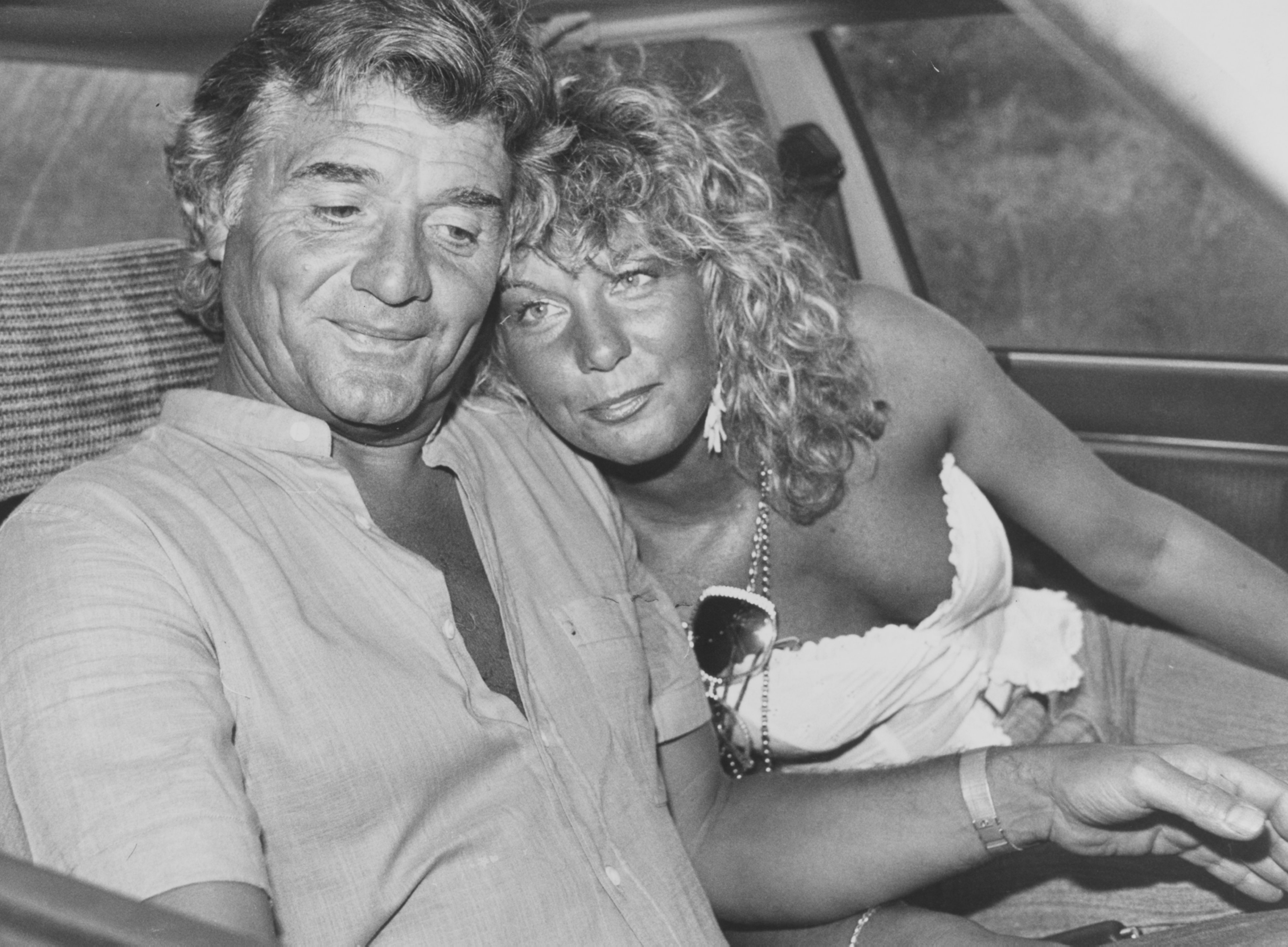 At Heathrow I decided it would be sensible to invest in some extra ­medical insurance.

The woman behind the counter said to me, rather cheekily: “Who’d have thought you would have trouble in your marriage?”

I bit my lip. She went on: “I’ll never forget that evening. I was in a club in Ruislip and your husband was there with this blonde.

“Three blokes didn’t like him cheating on you after all you’d done for him in that murder trial. Laid into him, they did.”

So that was what it had all been about that night Ronnie had come home all bashed up.

If Ronnie was involved with another woman — whether it was Susan Haylock or anyone else — he needed to make his mind up who he wanted to be with, me or her.

He insisted I was the only one in his life. But I found it hard to believe he hadn’t been with someone else, what with all the time he’d been spending in Spain.

Also, I found a bikini at the villa that didn’t belong to me.

I became so suspicious of Ronnie that I hired a private detective. I needed to find out, once and for all, what he was up to.

I was about to go on stage when the detective phoned the theatre: “Your husband has been to a woman’s flat in Edgware four times in one week. The woman’s name is Susan Haylock.”

Feeling sick, I got a taxi to Edgware. I spotted Ronnie’s red Honda in the courtyard. One of the residents let me into the lobby just as a door opened and the lady herself emerged, accompanied by my old man.

Ronnie’s face was a picture when he saw me, but he thought on his feet. He said: “This is Tommy ­Haylock’s missus, Barbara. I’m doing her a favour.”
I bet you are, I thought, and then I lunged at Ronnie, belted him one, and started screeching at him, telling him what I was going to do to him.

When we got outside, Susan ­Haylock ran off towards a black Mini parked beside ­Ronnie’s Honda. 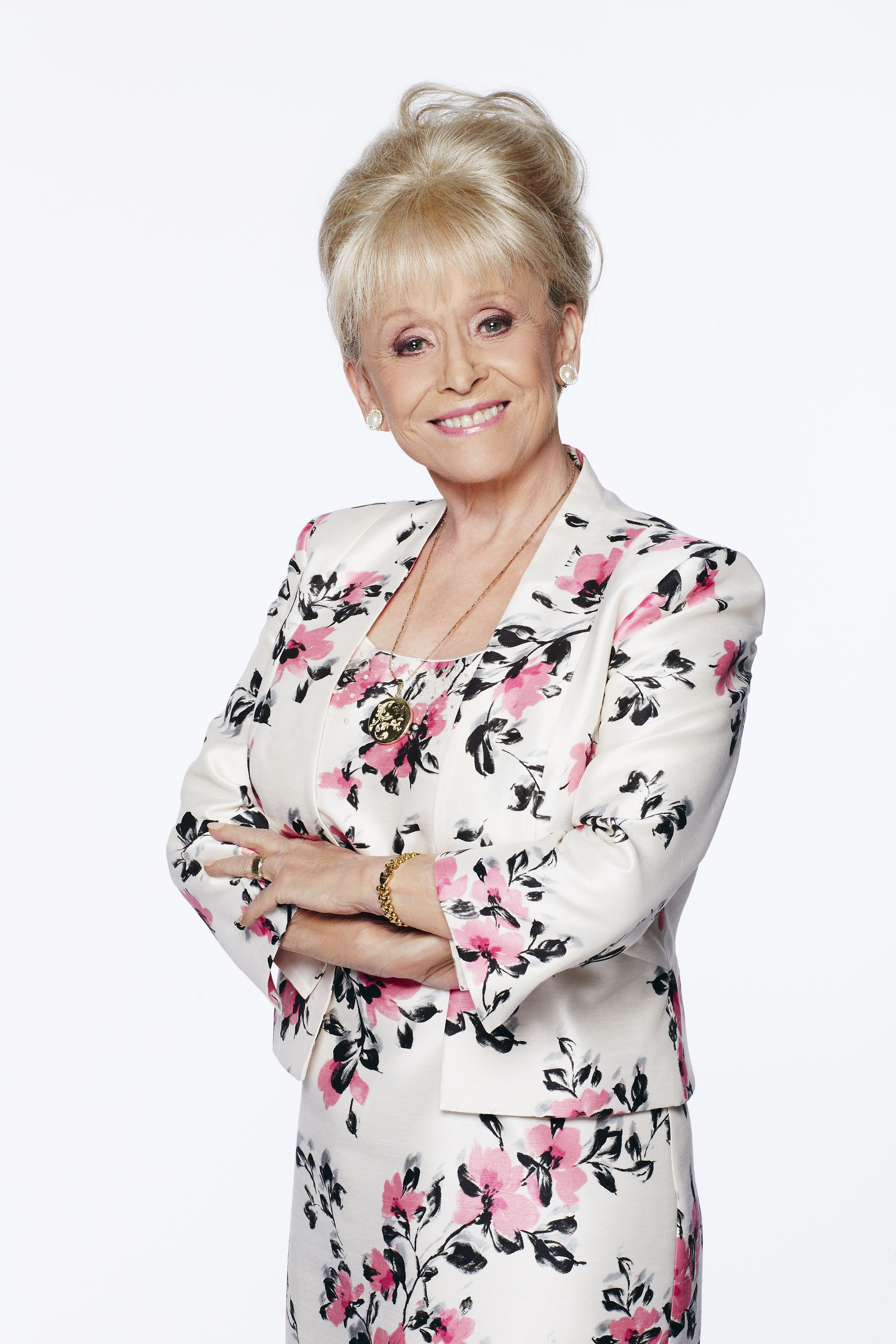 I ran after her, grabbed her hair and wrestled her to the ground. I wanted to give her a smack, not only for having an affair with my old man but also for not having done anything to help him the night he was beaten up in Ruislip.

Ronnie pulled us apart and paid off my taxi driver, who now had a story to tell his mates, and Susan Haylock drove off.

Why didn’t Ronnie just admit the truth? I know the reason, and so does he — he’s weak.

He may be handy with his fists but not when it comes to telling the truth and ­owning up when his deceit has hurt those he has professed to love.

In 1984 Ronnie escaped to Spain by the skin of his teeth when the police came after him for his part in the 1983 Security Express robbery.

Six men had got away with ­£6million after pouring petrol over an employee and threatening to torch him in Shoreditch, East London. Ronnie was out of my life at last and a new, far happier era was dawning — or so I thought. 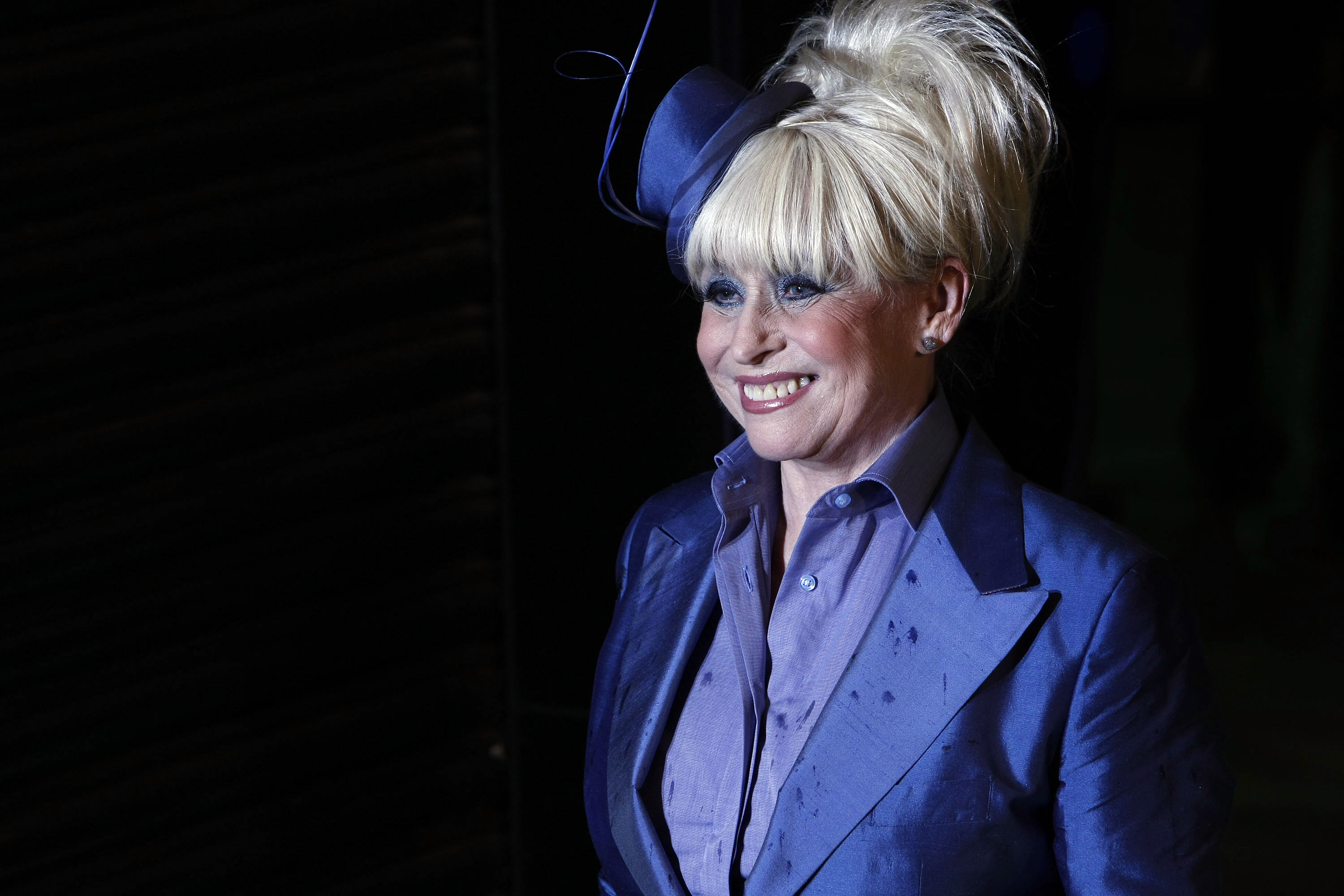 But then, in 1987, I was tipped off that he and Susan Haylock were about to get married, and I rang him the night before to wish him luck.

Ronnie told me the wedding would be a quiet affair at Fuengirola Town Hall, with only a handful of friends.

He said he had no money for anything grander. In fact, he was so short he’d had to borrow a few quid.

He even had the cheek to ask if some Premium Bonds my mother had bought him had come up.

Hoping he’d pick up the note of sarcasm in my voice, I said: “If they had, sweetheart, I’d have been straight on the phone to tell you.”

I was still waiting for him to keep a promise to sell our villa in Spain and give me my half of the money.

The trouble started the following Sunday morning, when I set off for Newcastle, where I was making a personal appearance. Outside my flat was a crowd of photographers and reporters. One called out: “What do you think of Ronnie’s big wedding?”

Another said: “What about him spending 20 grand on fireworks?”

I hadn’t a clue what they meant but at the airport I bought the papers and saw what all the fuss was about. There was Ronnie, pictured hosting a lavish party to celebrate his wedding, and among the guests were a good sprinkling of faces from London’s underworld. 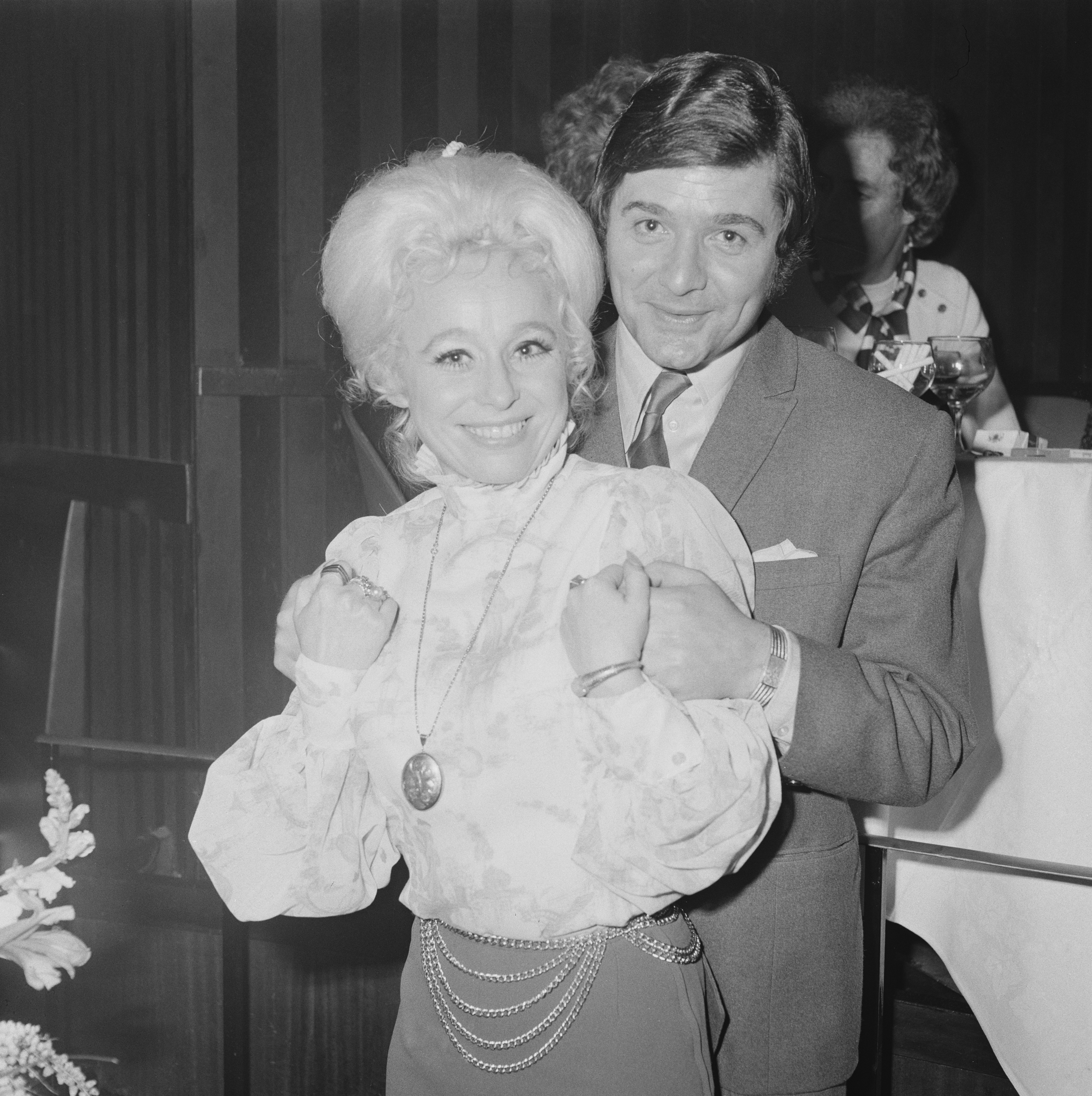 I spent the flight to Newcastle steaming at the blatant lies he’d told me only four days before, and fretting about the reaction at Scotland Yard. Where had the cash come from for all that?

It made my stomach knot with fury that he’d splash out like that when he still hadn’t sold the villa as he’d promised, and that he had the nerve to lie about it too.

But far worse, any fool could see that inviting well-known gangsters to such a high-profile do would be seen as cocking an arrogant snook at authority. It was tantamount to shouting from the rooftops: “I’m above the law and you can’t touch me.”

And it didn’t take a crystal ball to foresee that it would upset the police, who had for three years been thwarted in their efforts to have Ronnie extradited from Spain.

I was interviewed six times in all, and Detective Inspector Reid McGeorge very kindly saved until last something he knew would upset me.

Photographs taken at a villa in Estepona showed a group sitting round a pool, including Ronnie and Susan Haylock, all laughing and enjoying themselves.

I was upset. Very. The photographs had been taken long before Ronnie and I divorced.

The day after my last interview with the police, The Sun ran a story: “BABS SHOPS RONNIE”. The next thing, Ronnie was on the phone, angrier than I’d heard him in years.

He had got it into his head that he was an innocent man. I felt tarnished by him.

Here was a man who had already faced a murder charge and now we were talking about a brutal robbery where an innocent man had petrol poured over him and had been threatened with being set on fire.

When I put the phone down, what tiny speck of love I may have had left for Ronnie went out of the window.