Batman vs. Teenage Mutant Ninja Turtles will be available on Digital on May 14th and Blu-Ray/DVD on June 4th via Warner Bros. Home Entertainment.

Batman vs. Teenage Mutant Ninja Turtles, the upcoming addition to DC’s animated movie canon, will please new and old fans alike. Directed by Jake Castorena and written by Marly Halpern-Graser, and based on the DC/IDW crossover comic from James Tynion IV and Freddie Williams II, Batman vs. Teenage Mutant Ninja Turtles is just as much fun as you’d expect from the surprisingly logical mashup of these animal-inspired icons.

The setup of the story is relatively simple as Gotham City is hit with a spate of mysterious thefts of all the unstable and experimental tech that the city has to offer. After Batgirl (Rachel Bloom) sees some strange green muscled monsters seemingly fighting alongside a band of black-clad ninjas, Batman (played by Troy Baker, who’s pulling double duty here as the first person to ever voice Bruce Wayne and his arch-nemesis, the Joker) sets out to uncover the mysterious new threat which has entered his beloved hometown.

One of the most entertaining and unique things about this animated adventure is that the Turtles act as avatars for audiences and comic fans as Raphael (Darren Criss), Michelangelo (Kyle Mooney), Donatello (Baron Vaughn), and Leonardo (Eric Bauza) offer up a near constant commentary about just how “bonkers” Gotham actually is. Whether it’s Mikey’s constant awe and wonder at the variety of villains, or the constant presence of blimps in the sky, there’s a self-awareness about the juxtaposition of the worlds that feel smart, funny, and fresh.

Given that it’s about characters renowned for their martial arts prowess, the film definitely delivers in the action department. The fight choreography–particularly in the first act–is outstanding and feels completely different from anything else in the DC Animated Universe. There’s even a clear distinction between Batman and the Turtles’ fighting styles, as well as a super cool inclusion for fans of Kung-Fu movies, as it turns out that the Foot Clan have their very own version of the Five Finger Death Punch.

There’s plenty more comic book-heavy Easter eggs too, from the black and white credits which are reminiscent of the style of the original TMNT books to the Superman mug that Batman drinks from all the way through to a Knightfall joke and the classic Batcave which features some pretty cool nods for Bat-fans. It’s also impossible to watch this flick and not be blown away by the character designs which manage to be iconic, cartoonish, and really, really cool.

For devotees of the two worlds at the core of Batman vs. Teenage Mutant Ninja Turtles, this is a non-stop thrill ride with a whole bunch of fan service and wish fulfilment moments that never feel like they distract from the (relatively simple) story. But in a surprising twist it also works as a pretty great primer on both the Turtles and Batman, doing a skillful job at weaving the origins and lore of both into the structure of the narrative without it ever feeling like unnecessary exposition. The film also features an enviable rogues gallery with Shredder, the Foot Clan, Ra’s al Ghul, Harley Quinn, Poison Ivy, and Mr. Freeze among many others making up a formidable and fun threat. 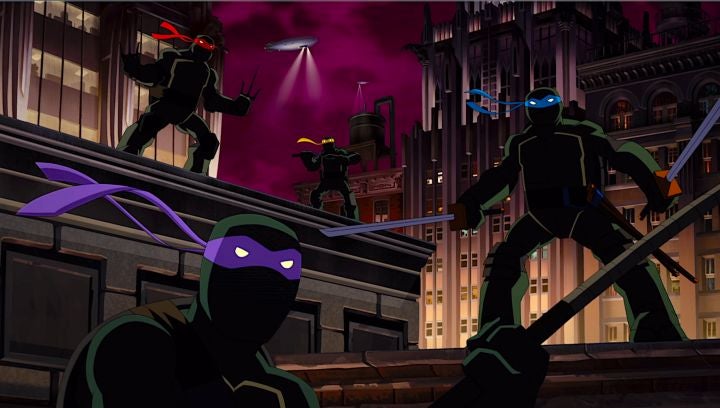 If there’s one problem that Batman vs. Teenage Mutant Ninja Turtles faces, though, is a slightly unbalanced tone. The dark grittiness of Gotham feels more like a fun theme park through the wide eyes of the Turtles, and there’s joy in moments that see the teens flying across the shadowy city with only their primary-colored bandanas to tell them apart. So when it comes to the villains, things get a little muddied. The scheme at the core of the film is pure comic book absurdity which melds the two source comics perfectly, but when we see Ra’s al Ghul (Cas Anvar) and Shredder (Andrew Kishino) decapitating and killing multiple people it becomes a little less clear who this adaptation is for.

Overall, however, this is a super solid entry into DC Animated canon which delivers on some shell-kicking Bat-action whilst introducing a needed dose of humor that’s often lacking in DC’s much lauded animated offerings.

Batman vs. Teenage Mutant Ninja Turtles is a whole bunch of radical fun that showcases just how talented DC’s animation department is, and why they’ve long been seen as one of the best around. If you love TMNT and the Bat-family then this will likely become a firm favorite, and even if not, you’ll almost certainly find something to enjoy in this rip-roaring romp.