Nina Warhurst got the giggles on Sunday’s episode of BBC Breakfast, while she presented a segment about penguins at Edinburgh Zoo with her co-host Chris Mason. Nina couldn’t help but laugh when Chris began offering up a “fun fact” about the animals.

The BBC Breakfast presenters began by explaining that Edinburgh Zoo had a number of new arrivals.

Nina said: “Edinburgh Zoo is celebrating the arrival of nine chicks. Have a little look.

“Now these are Gentoo penguins, which is the third largest species, you wouldn’t believe it looking at that chick.

“The first eggs hatched last week to parents Muffin and Mittens and it is hoped more will emerge in the coming weeks,” she explained. 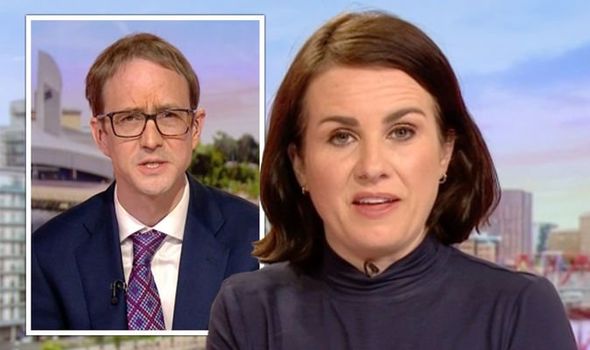 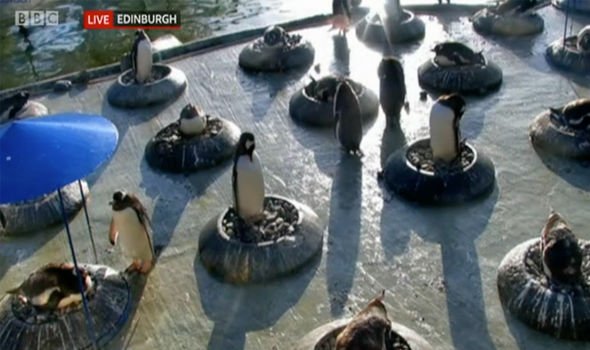 “This is the live penguin cam from Edinburgh Zoo,” Chris revealed to viewers, addressing the live images being shown on screen.

“Got a fun fact for you,” Chris exclaimed, with Nina replying: “Go on!”

Chris said: “Gentoo penguin chicks weigh around 98 grams when they hatch, which is about the same as half an avocado or one onion or a small apple.”

“I actually just Googled ‘How much does an avocado weigh?’ Six ounces apparently, so if you halve that that’s three,” he explained. 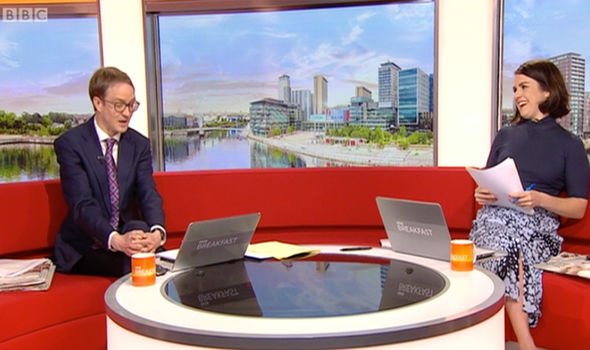 However, Nina couldn’t hold back her laughter at Chris’ attempt at an interesting fact and decided to poke fun at her co-host.

“What an incredibly useful piece of information with a lot of practical use,” Nina said, teasing Chris.

He said: “Now the thing is, we are looking at these pictures and you may be thinking as we were ‘where are these little nippers?’

“And I think they’re being sat on aren’t they?” Chris explained.

Nina replied: “Hopefully because Edinburgh, having lived in Edinburgh for a few years, it can be pretty nippy at this time in the morning.”

Chris came back, saying: “Yes but penguins are used to a blast of the cold aren’t they?”

“Maybe they are inside in their little penguin cots,” Nina jokingly suggested.

Chris joked: “This is us doing our Poundland David Attenborough impression isn’t it?”

“Good luck to the new parents. They’ve got a lot on their plate,” Nina added as she wrapped up the story.