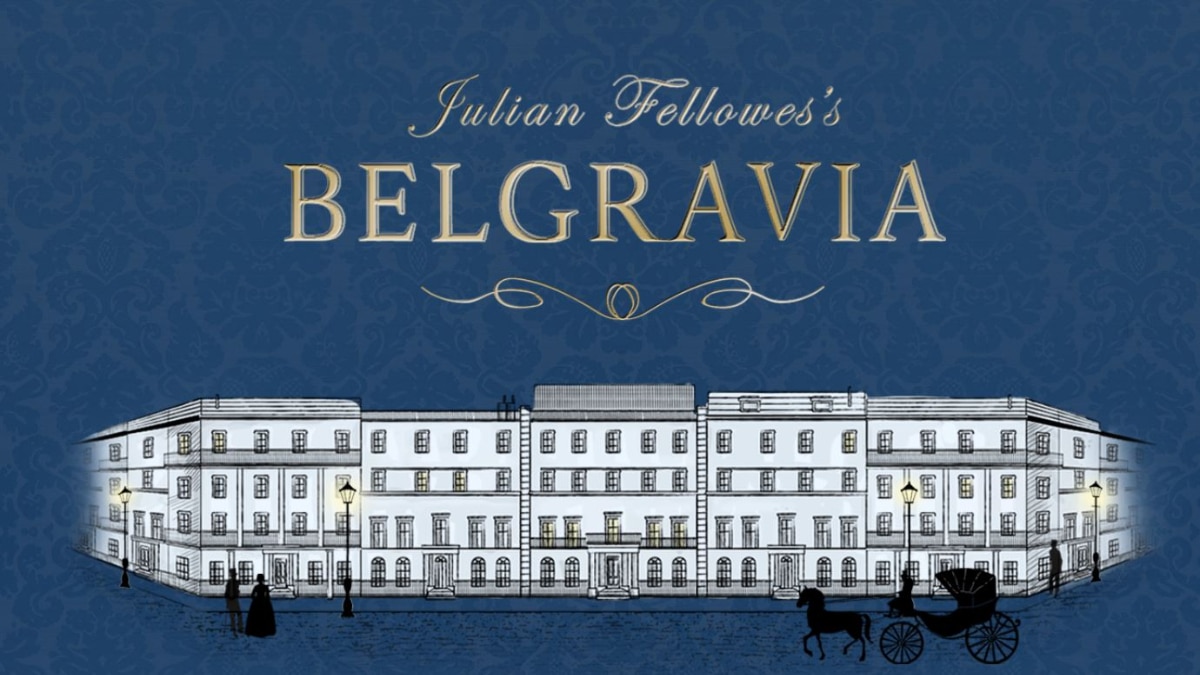 Charles Dickens’ serialized tales of London are a format of what Julian Fellows hopes to emulate as he recreates another dramatic world of yore replete with love, secrets and betrayal. Belgravia is the rich period piece told in a modern way, both by a traditional book, audiobook and also by downloading via an app online.

It was announced at the Television Critics’ Association press tour this past summer that Fellows and EPIX were teaming up to also show it on the network. ITV will air Belgravia in the U.K. first.

Many know Julian Fellowes, Gareth Neame and Carnival Films as the team behind Downton Abbey.

What we know of Belgravia

This fictional work is named for the wealthy neighborhood of Belgravia in central London. It is an area defined by majestic townhouses, posh shops and exquisite hotels and restaurants.

This is a historical drama, opening on the eve of the Battle of Waterloo in a fancy ballroom with a party thrown by the Duchess of Richmond in Brussels.

The Belgravia story will span 25 years, revealing the secrets from that auspicious evening.

Fellowes is also releasing the new book, Belgravia, for those who prefer to hold a book and read at leisure.

During the press tour, Fellows’ project was described as the perfect marriage of a serialized Victorian novel to modern technology, allowing the reader or those who listen to be actively meshed into the characters and the background of the story.

Belgravia is currently in production in London. It is being filmed as a six-part limited series for ITV and EPIX from Carnival Films, the makers of Downton Abbey.

The premise of Belgravia

The Duchess of Richmond throws a sumptuous ball in Brussels in honor of the Duke of Wellington.

The guests will include James and Anne Trenchard, who were made wealthy by trade. Also attending will be their beautiful daughter Sophia, who is piquing the interest of Edmund Bellasis, the son and heir of yet another British prominent family.

But the twist will be told over time: Twenty-five years later, as these two families are settled in stately Belgravia, the events of the “tragic” ball still resonate and have repercussions. Gossip, intrigue, class and rank drama, rich people behaving badly, you get the drift.

Belgravia for television will be directed by John Alexander.  Donal Woods will serve as production designer. He also did Downton Abbey, so you know the visuals and set dressing will be spot on.

“It’s fantastic to be working again with Julian, a master storyteller,” executive producer Gareth Neame said in a press statement. “In Belgravia, he has painted a wonderful backdrop of 19th century society against which intrigue and dynastic power struggles will play out.”

Who is Julian Fellows?

One of television’s most esteemed multi-award-winning actor, writer, director and producers, Julian Fellows matriculated through Ampleforth and Magdalene College, Cambridge.

He also wrote Piccadilly Jim (2004), Vanity Fair (2004), Young Victoria (2009), The Tourist (2010), Romeo & Juliet (2013), and the three-part drama Doctor Thorne for ITV.  Fellowes wrote and directed the award-winning films Separate Lies and From Time to Time. He also wrote the books for the Tony-nominated stage production of Mary Poppins and for School of Rock: The Musical which opened on Broadway in December 2015, and was written and produced by Andrew Lloyd Webber.

Living in London to this day, Fellowes also has penned two international bestsellers Snobs (2005) and Past Imperfect (2008).

Told in 11 chapters, the secret that unravels behind the ornate doors of London’s grandest postal code (zip code) is the hook. The story behind this secret will be revealed in weekly installments with twists and turns and cliff-hanger endings, all delivered to your mobile, tablet or desktop via a new app.

The app is out now, with the first episode free to download.