It’s hard to choose the most arresting scene in “Touch Me Not,” the documentary/narrative hybrid that captivated jurors at the 2018 Berlinale to earn the festival’s top prize. There’s the opening shot of a flaccid penis, of course, but nudity quickly loses its luster as the various depictions of sex (not movie sex, but sex like regular people have) unfold like a kaleidoscopic tour through human sexuality. It’s hard to forget watching a woman (Laura Benson) who can’t stand being touched encounter a portly BDSM expert punch her chest in a steady, thumping rhythm until she lets out a guttural roar. Or witnessing the intimacy required for a reserved man with alopecia (Tómas Lemarquis) to admit to a man with spinal muscular atrophy (Christian Bayerlein) the discomfort he feels during their prolonged eye contact.

Directed with sensitivity by Romanian filmmaker Adina Pintilie, the two-hour epic is a mesmerizing look at human sexuality from a wide diversity of perspectives. The film is anchored around Laura’s quest to discover her sexuality, playing like a feminist reversal of Lars von Trier’s hyper-sexual “Nymphomaniac,” if the Danish auteur had actually understood the infinite complexity of women’s desire. (Laura even looks a bit like Charlotte Gainsbourg). Encouraged by Pintilie, who appears onscreen framed by the hood of her camera’s monitor, Laura seeks out various sex workers to aid her in her search for intimacy.

A transgender woman and a sex worker in real life, Hoffmann brought her lived experience to the film. Her scenes are provocative and revealing, but always respectful of her body and identity. Pintilie never shows her body in a leering or objectifying way, but allows her to speak for herself. “I think of my penis as my cunt,” her character says in the film, touching herself for Laura to observe. “I do it more like a woman does it.” 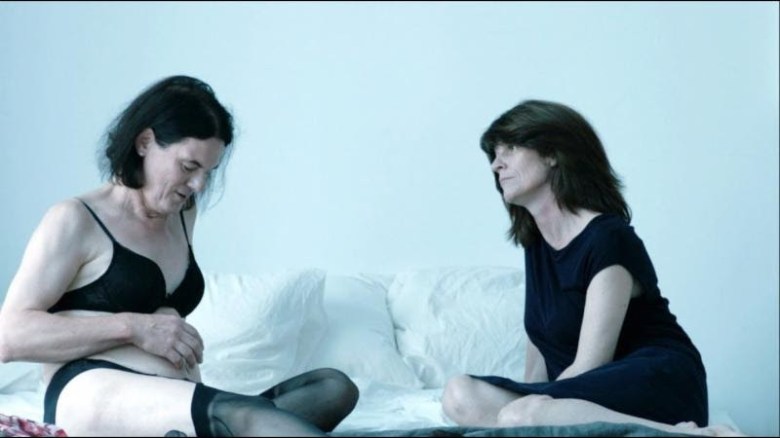 Hanna Hofmann and Laura Benson in “Touch Me Not”

What could have easily been an exploitative scene of a marginalized person is softened by the many lenses through which it has passed — first Laura’s, then Pintilie’s, before it gets to the audience — that even the most attuned eye can breathe easy that Hanna shared such intimate confessions freely and in an environment in which she felt safe.

“There is always this layer of being seen and being looked at, as very important in the process of the development of your identity,” Pintilie told IndieWire. By filming both the group therapy and unconventional sex scenes, Pintilie forces the viewer to confront the way they look at and observe — and the judgments that arise during this everyday act.

“Our sexual behavior, our behavior in intimacy and sexuality, it’s a key to our subconscious,” said the filmmaker. “Our kinks, our preferences, the way we experience intimacy, these are not anomalies. They are parts of ourselves…and if we look at them with acceptance we can have a very different relationship with ourselves first, and then with the other. This will have a very important impact on the community level because then you will accept the other in a different way.”

“There [are] very [many] cliches about sex workers…and also about transsexuals,” Hoffmann said, explaining why she signed on to consult and ultimately act in the film. Pintilie added: “The stories [Hanna] told me about the clients are very much about self acceptance. Accepting that if you have a different body, or a different sexual behavior than the normal one, it can be as valid, it doesn’t mean you are wrong and it needs to be fixed. It’s just a different way to experience your humanity.”

Kino Lorber will release “Touch Me Not” on iTunes on March 12 and DVD starting April 9.