Rachel Reilly and Brendon Villegas now have a new baby boy in their lives.

Rachel gave birth to their son this week, joining with four-year-old daughter Adora to make them a family of four.

We are still waiting to see pictures of the new baby, which Brendon hinted will be coming from Rachel in the near future.

The news itself was posted by Brendon on social media as the second-time dad couldn’t help but share the moment with the world.

Rachel and Brendon from Big Brother have child No. 2

Brendon updated all of his social media followers when he posted on Twitter that the baby had finally arrived.

“Thank you for all the well wishes for Rachel and the baby. Rachel and our baby boy are both healthy and doing well,” Brendon wrote on Twitter.

“They are recovering at UCLA. I am sure it will not be too long until Rachel shares some pics, but I will leave that up to our momma warrior. No name as of yet,” Brendon concluded with a nervous emoji.

Brendon would end up returning to social media to give an update on the situation.

He captioned the photo by writing, “No pic of the baby just yet, but he is a big boy! So much love and respect for Rachel. How she did it I will never know.” 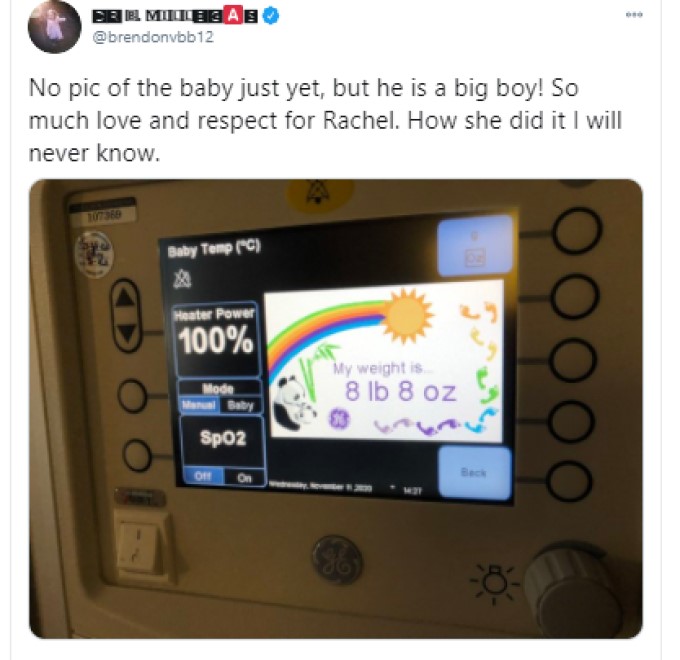 It’s definitely been a busy week for the couple, with Brendon earlier posting that they were arriving at the hospital and showing off just how nervous he was about the big day. He can relax a bit now, though, because baby No. 2 has arrived.

One of the most successful showmances to emerge from Big Brother has been the one between Rachel Reilly and Brendon Villegas that took place on Big Brother 12. They became very close inside the house and that translated to a lasting relationship outside of the game.

Rachel would return to become the Big Brother 13 winner, and many fans hoped that she would get to return for a future All-Stars version of the show. That didn’t happen, though, as she was too pregnant to go on Big Brother 22 to compete again.

For fans hoping to follow in Rachel’s footsteps and become a Big Brother winner, applications are now open to compete as a member of the BB23 cast. Hopefully, the new season arrives as early as June for CBS viewers.

Unfortunately, Survivor was taken off the CBS schedule, so it’s possible that there could also be a new season of Celebrity Big Brother soon.

Big Brother is currently on hiatus at CBS.