For those wishing to know who is in attendance at the reception, Buckingham Palace were keeping the event “shrouded in secrecy” by refusing to let even the BBC know who was on the guest list. One reporter for the broadcaster shared their frustration at being unable to see who was arriving for the event.

Speaking on BBC News, the reporter, Rebecca, commented: “Yes that was a pretty impressive sight wasn’t it Ross?

“We’ve been watching a lot of arrivals here in the last hour or so.

“Various limousines with police outriders but there is nothing as impressive, I have to say, as President Biden’s motorcade.

“As I said, he swept past here just over an hour ago to Westminster Hall where he and the first Lady Jill Biden saw the Queen lying-in-state. 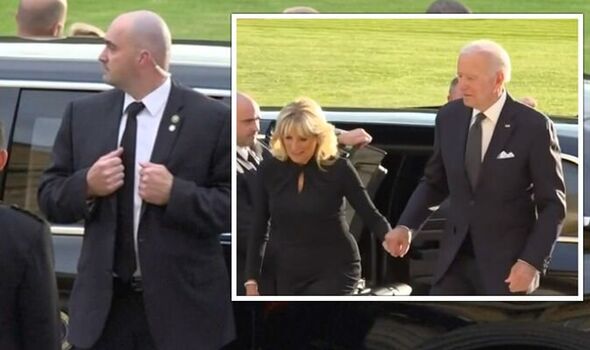 “Then he went on to sign the book of condolence at Lancaster House. I was very struck by something he said Ross.

“He made a public comment, ‘Queen Elizabeth was decent and honourable. She communicated dignity and above all a notion of service.’

“Those public comments from the President of the United States as we await him to emerge from the presidential motorcade to go into Buckingham Palace to join the reception.

“This extraordinary reception, an unprecedented gathering of world leaders, of politicians and other dignitaries which we understand is due to start at about six o’clock local time. 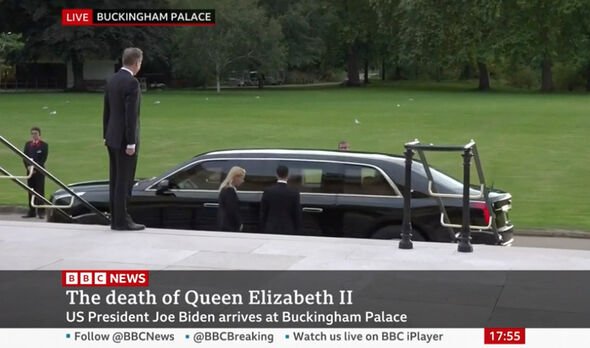 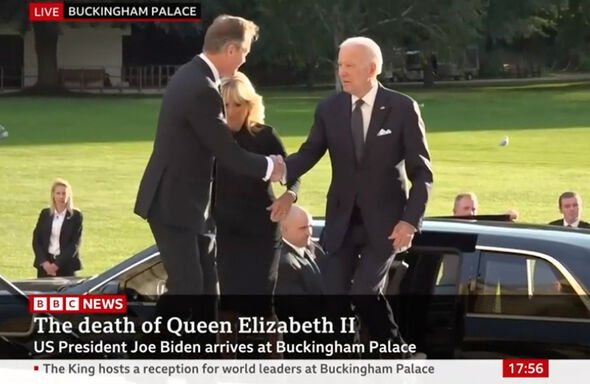 “So this would make sense that the President Joe Biden is the last guest to arrive.”

Video footage of the President and the First Lady emerging from their car was shown as Rebecca continued: “The US First Lady arriving here for this state reception accompanied by the US President Joe Biden as they head inside to this reception hosted by King Charles III and the Queen Consort, Camilla.

“I have to say Buckingham Palace is being reluctant about giving a lot of detail about who will be there.

“They’ve told us they won’t give out a full guest list and rather frustratingly a lot of other dignitaries have been arriving either in limousines with blacked out windows or on a series of coaches that arrived just about 45 minutes ago.

“We understand they’re containing dozens and dozens of guests. We know President Macron of France is already inside, we know the Emperor of Japan has been invited.

“So a good, glittering guest list for this state reception at Buckingham Palace which we understand will take place in the picture gallery and then in the state apartments and guests will be offered drinks and canapés and strange as it may sound it’s clearly a very formal occasion, a choreographed occasion.

“But it may be an occasion for some of these dignitaries to meet each other in a slightly more informal way than at the funeral of the Queen tomorrow.

“But as I say that reception is expected to begin in a couple of minutes.”

All those at the state reception are expected to be in attendance at the Queen’s funeral on Monday, September 19.

The Queen’s funeral will begin at 11am with a nationwide two minute silence at 11.55am.

The late monarch will then be taken to Windsor where she will be laid to rest in a private ceremony.