Adapting a British comedy from the dark and frequently challenging mind of writer Julia Davis to the traditionally more conservative US television market is no easy task. Even on HBO, which is generous in what it will show and where it will go, reshaping the brilliant British comedy Camping was not simple.

Girls writer/writer producer Lena Dunham first chanced across Camping, about a group of friends – couples for the most part – who go on a camping holiday. Dunhan then handed it to her writing partner, Jenni Konner. 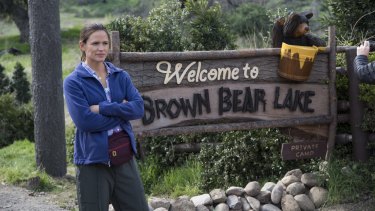 "We fell in love with it, we were like, what a great framework for a show, for a comedy," Konner says. "This idea that you're in the whole wide world, the biggest outside you could ever be and it's the most claustrophobic thing in the entire world.

"It reflected movies we loved like The Big Chill and Anniversary Party," Konner says. "Just the things where you get a bunch of people together and when they have nowhere to go and they're annoyed at someone.

"She's amazing and I hope [the American adaptation] is as much fun," Konner says. "We used a lot of her stuff. She was in the writer's room for two weeks so we really tried to incorporate the energy of Julia into this, cause she has a wild mind."

While the experience is not so different to working on Girls with Dunham, Konner is loathe to compare the two.

"I don't know if I can answer it cause they both have such different challenges. Like trying to honour Julia but make it our own and then also just with Girls just starting from Lena's scratch, this beautiful script she wrote. So, I don't know both are so great it's an embarrassment of riches."

At this point Jennifer Garner entered the frame, the actress that Dunham and Konner had thought could play Kathryn, the wife of the camping trip's birthday guest of honour, Walt (David Tennant).

Garner admits she was initially intimidated by the British version. "It scared me," Garner says. "She's unflinching and Julia Davis and the British sensibility they just have no fear they just go right off the cliff with something. I was nervous about it overall.

"When I read what Jenni and Lena had written, they help you understand why she is the way she is," Garner adds. "Because we are all messed up and we do all carry our baggage with us and we are all annoying to be around at times and it's nice to just unpack it and see why.

"And it's doled out in tiny little snippets that you really have to watch to understand Kathryn but to me she's a hero," she adds.

The 46-year-old actress says she understands the archetype of the "nightmare LA mum" but says she does not have any in her circle of friends. Well, maybe.

"I don't live in the world of mums who are anything like my character and at the same time I see bits of Kathryn in myself and in my friends all the time," Garner says.

"We were just talking about different ways recently that I have been Kathryn, and planning something with, as in an aggressive way, where I'm so committed to people liking what I'd planned," Garner adds. "I've done that."

Garner says the remote filming location and the manner in which the cast essentially stayed on site made it feel like the series was made in a bubble.

"I feel like it's a little jewellery box but you have no idea if people will like it," Garner says. "We could do eight episodes, they're half an hour and they're in LA and that's completely different from 22 [episode sitcoms] all balled out."

Best known for her roles on the television spy thriller Alias, Garner confesses she never imagined herself in a HBO series.

"I mean, it feels so fancy," she says, laughing. "Like, oh yeah, I'm here with Reese [Witherspoon] and Amy Adams and Nicole Kidman and it's a female gathering." [Witherspoon, Kidman and Adams all star in HBO dramas.]

Then, more seriously: "I feel like this isn't new that TV has [started telling female stories]," Garner says.

"TV audiences have gravitated more to women's stories than maybe film audiences have in the past," she adds. "But now the TV audiences are really pushing what they want and the networks and HBO and whoever is streaming whatever else is out there are really paying a lot of attention. It's just nice to be back."

The series, Konner says, is at its heart one of female relationships.

"It's really something Lena and I want to talk about a lot," Konner says. "And we've talked about it a lot in Girls but those girls were so much younger and it was so different and they were sort of default friends from college.

"These are grown women that have chosen each other for whatever reason and have hurt each other and betrayed each other," Konner adds. "How cruel can these women be to each other? Is there room for kindness? All of those questions were really intriguing to us.

The series also explores the ways in which relationships shift over the longer term.

"The idea that you can go through something where for a really long time you don't like each other," she says. "How do you blow that out and come out the other side? What does that look like? Is it possible? Can you still be friends at 60 with the people who drove you nuts at 40? And can you still be married to someone at 60?"