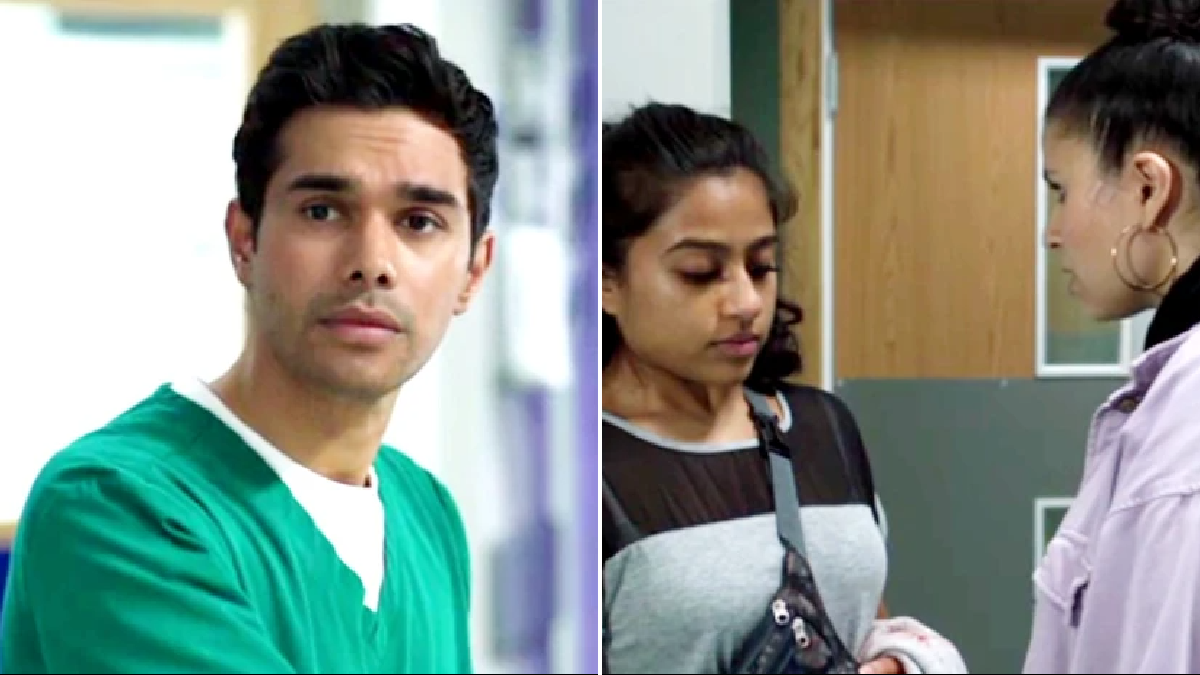 What happened to Casualty’s Dr Matthew Afolami (Osi Okerafor) in Africa? All we know so far is that it must have been something traumatic, as he was having violent and scary flashbacks all through tonight’s episode. This was initially triggered by a girl who was being chased running into his car, leaving a bloody handprint on the windscreen. Later on, as he struggled to save the life of a woman who’d been shot by a crossbow bolt, the flashbacks became more intense.

This led to him getting angry with theatre staff – which earned him a telling off from Dylan (William Beck) and earned Dylan a telling off from Charlie (Derek Thompson) for telling people off in front of patients. Matthew also lost focus a bit during a tricky procedure, but his patient was fine in the end.

Stevie Nash (Elinor Lawless) has asked Matthew out for a drink previously, and he’s turned her down. But she took time off from plotting revenge against Ethan (George Rainsford) to pounce on Matthew while he was feeling vulnerable, and they slept together. How an already traumatised Matthew will cope with having the somewhat intense Stevie in his life remains to be seen.

Rash (Neet Mohan)’s loyalties were tested when the sister of one of his oldest and best friends appeared in the ED. Hafsa (Zainab Hasan) was a youth worker who was there with one of the people she mentored, Farah (Halema Hussain). Farah was the girl who’d collided with Matthew’s car at the beginning of the episode, and she’d been caught up in some gang violence.

The attitude of the police in stopping and searching Rash because of his ethnicity – Ethan, who was with him, wasn’t searched – and Rash’s history with Hafsa’s brother made this case quite personal for him. When he discovered that Farah had a knife strapped to her leg, he had a decision to make – should he tell the police, or did his loyalties lie more with the two women? He threw the knife into a sharps bin, and told Hafsa and Farah to contact him if he could do anything for them in the future.

This is bound to have future repercussions for Rash, as we got a glimpse that Hafsa is not as nice as she seems. She’ll be back.

Apart from Farah, the other patients of the week came from an incident where a woman was accidentally shot with a crossbow. We saw a father and son, Nick (Martin Walsh) and Ryan (Connor Catchpole), going hunting. This was meant to be a birthday treat for Ryan but it was obvious it was the last thing he wanted to do and he was only trying to please his father.

When a woman shooed away the deer they were hunting, Ryan stumbled and accidentally shot her with the loaded crossbow. The very best thing about this storyline was Teddy (Milo Clarke)’s reaction to being called out to a crossbow shooting. ‘That’s great!’ he said. ‘It’s just summat different in’t it?’ It certainly was that.

The new series begins Saturday 8.45pm on BBC One. pic.twitter.com/ssSalGwZkI