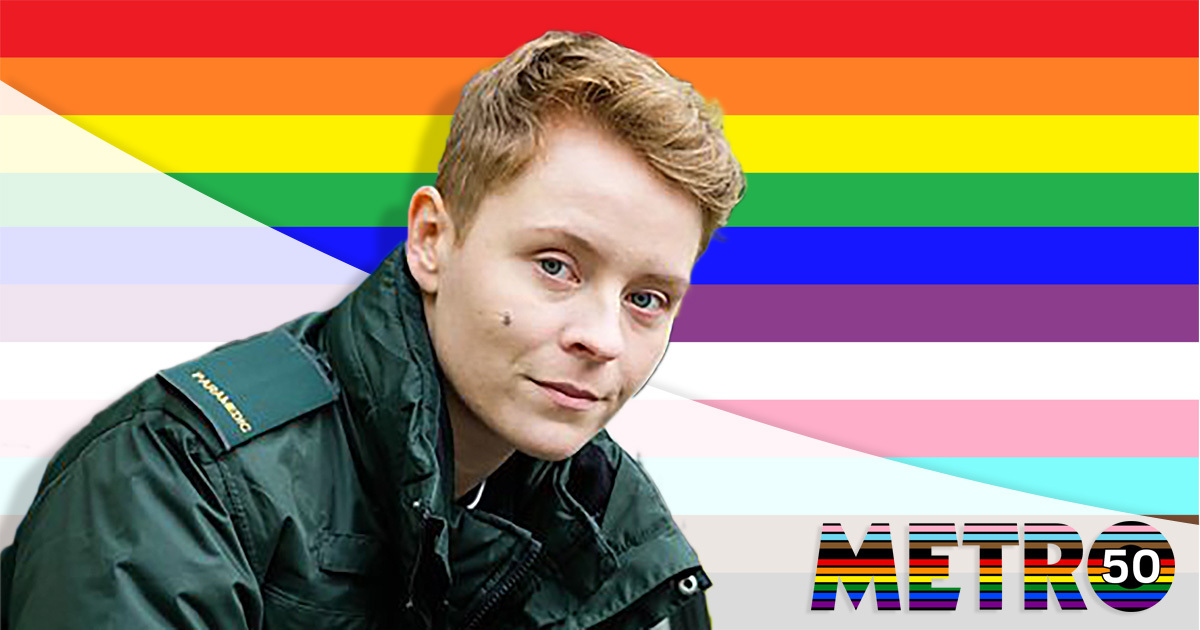 Sah represents a lot of firsts. My first professional gig, my first Queer character since coming out and the first ever regular non-binary, transgender character on Casualty.

As a kid – actually, as a kid, teen and adult – my favourite characters in any and all media were silly boys that were kind of the odd one out.

I have always loved Tolkien’s work because although the characters are predominantly male, which is not how people perceived me when I was younger, I realised that I saw myself in the Hobbits.

I never felt under-represented in media because I unknowingly related to these very Queer-coded male characters that aligned with what I would later discover to be my gender identity.

I play Dungeons and Dragons too, and the last character I played before realising I was trans and non-binary was a Changeling boy, a shapeshifter, someone who could become whatever they wanted on any given day. A very telling choice, in hindsight.

Fantasy storytelling, especially improvisational stuff like D&D, has always given me a safe space to explore my identity through characters based on parts of my personality, whether I was aware of it or not.

These days, I find myself auditioning pretty much exclusively for male and non-binary roles.

My child self who would run around with no shoes on, pretending to be Bilbo Baggins while trying not to step on any bees, would feel such unbridled joy to know that just a few weeks ago, I was in an audition room alongside predominantly cis men, all of us vying for the same role in one of the most affirming experiences of my life so far.

Sah is really interesting for me to play for a number of reasons. I think that I’ve figured out more about my Queer identity than they have when you meet them in the show.

I am familiar and comfy with my sexuality and I’m uncovering new parts of my gender identity at a rapid pace. I am non-binary and also transmasculine, which means that I consider myself to lean more towards masculinity. I’m more Boy than anything else, but still not a man.

It’s incredibly validating to have been cast in this role, as the character was written before their Queer identity was decided.

There was a brief discussion in my recall audition about my Queer identity and the character was moulded around that once I had been cast.

Sah wasn’t non-binary until I came along, which goes to show that Casualty weren’t just ticking a diversity box when they hired a non-binary actor, which is super affirming.

In my head, Sah’s gender identity isn’t as solid or realised as mine is, probably because they just haven’t had the time or brainspace to consider or explore it more than they already have.

I’m not actually sure that Sah’s gender expression is the same as mine, I’m kind of figuring it out along the way, just like they are. In terms of sexuality, who can say what Sah has got going on. You’ll have to keep watching!

I am very fortunate to have outrageously supportive family and friends, but Sah hasn’t always had the luxury.

We’ve heard in their words how their childhood bully made them too afraid to come out when they wanted and they’re deadnamed on a birthday card in a recent episode.

Not all the characters in the show are accepting of Sah, which is completely true to life and may be surprising to some people who haven’t experienced it for themselves.

For example, Willow, a patient that Sah and Iain look after in the episode ‘Dark Room’, says ‘you’d be pretty if you didn’t pretend to be a boy’ and ‘at least you won’t have to worry about having children’.

Shocking statements, but things that I, and other trans and queer folks, hear on the daily. However painful it is to hear, it’s important to keep these moments in the show to display what we’re dealing with and what kind of behaviour is unacceptable.

This year will be my first Pride month as an openly trans, queer person in the public eye.

As you can probably imagine, the number of difficult conversations I’ve been having with people has increased significantly, along with the amount of self-care I need.

However, it’s astonishing how many people have reached out to say that they feel seen, represented, emboldened, affirmed, comforted by Sah and their journey.

This year marks 50 years of Pride, so it seems only fitting that Metro.co.uk goes above and beyond in our ongoing LGBTQ+ support, through a wealth of content that not only celebrates all things Pride, but also share stories, take time to reflect and raises awareness for the community this Pride Month.

And we’ve got some great names on board to help us, too. From a list of famous guest editors taking over the site for a week that includes Rob Rinder, Nicola Adams, Peter Tatchell, Kimberly Hart-Simpson, John Whaite, Anna Richardson and Dr Ranj, we’ll also have the likes Sir Ian McKellen and Drag Race stars The Vivienne, Lawrence Chaney and Tia Kofi offering their insights.

During Pride Month, which runs from 1 – 30 June, Metro.co.uk will also be supporting Kyiv Pride, a Ukrainian charity forced to work harder than ever to protect the rights of the LGBTQ+ community during times of conflict. To find out more about their work, and what you can do to support them, click here.