Right from the start, George Clooney and producing partner Grant Heslov demanded period authenticity for the hellish World War II aerial combat missions in their miniseries remake of Joseph Heller’s black comedy, “Catch 22.” That put the onus on production designer David Gropman and cinematographer Martin Ruhe to tackle the exterior and interior aerial combat missions, and to put us up close and tight inside the B-25s with Christopher Abbott’s Yossarian and his fellow bombardiers.

“We all agreed that the aerial work had to be realistic and [intense],” said Ruhe. “That’s why we shot as much as possible with real planes in the air.” However, they could only afford two functioning B-25s because of the cost of transporting them from the U.S. to Sardinia, where they shot on an abandoned runway near the Olbia Airport. The cinematographer shot with Alexa Minis mounted to all of the period planes and a few helicopters for wider views of the attacks. In post, with the aid of VFX, they would add more planes and smoke.

Then, for a German bomber attack on the airfield near the Air Force base, Ruhe shot a series of logistically complicated action scenes at night with the aid of special and visual effects, with seven cameras covering 40 explosions, happening concurrently with dialogue scenes in a tower and in a jeep. “A lot of things had to come together for it not to feel artificial,” he said. 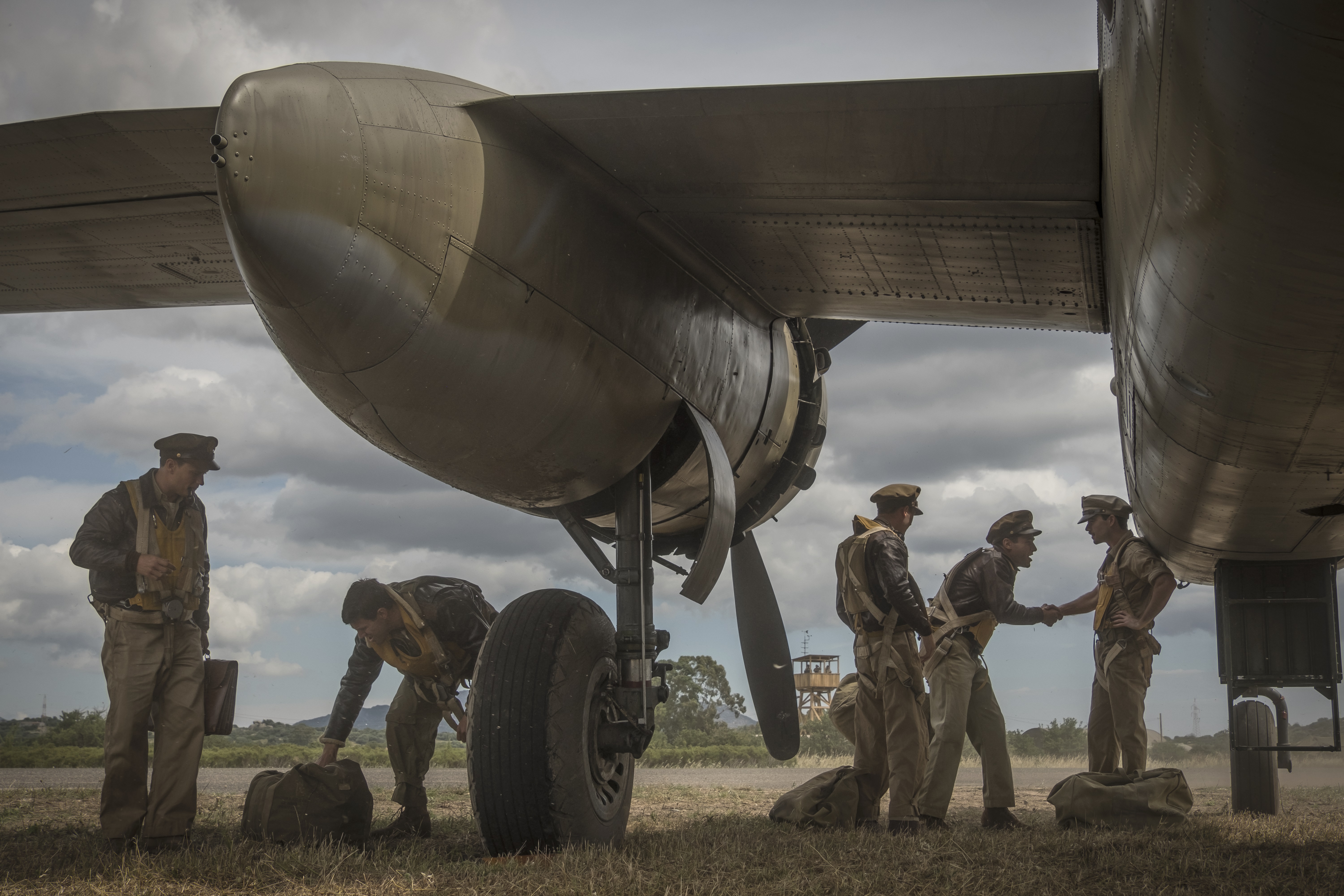 Meanwhile, for the claustrophobic interiors of the B-25s, Gropman and his art department borrowed a two-piece fuselage (nose and tail) from a Belgium museum and mounted it on gimbals on a soundstage at Cinecittà Studios in Rome. But it was an empty shell, so they retrofitted the fuselage entirely with authentic instrumentation, seats, and weaponry.

“We decided early on that we weren’t going to use an interior set where you could pull walls, that the camera was going to be in the plane with those characters, which makes for pretty close quarters,” said Gropman. “In my very first conversation with George and Grant, we talked about absolute period correctness, but not letting that rule the visuals. That we wanted the audience to understand the world that we were representing, but in no way to be anachronistic.”

For cinematographer Ruhe, who studied World War II newsreel footage of bombardiers, he recreated the hot, grainy, contrasty look inside the B-25s. He got there right up against the actors with his smaller mini-cameras, which he operated himself. “We wanted you to feel the texture in the images,” he said. “We didn’t want it to be too clean and perfect. It was shaky and handheld.” 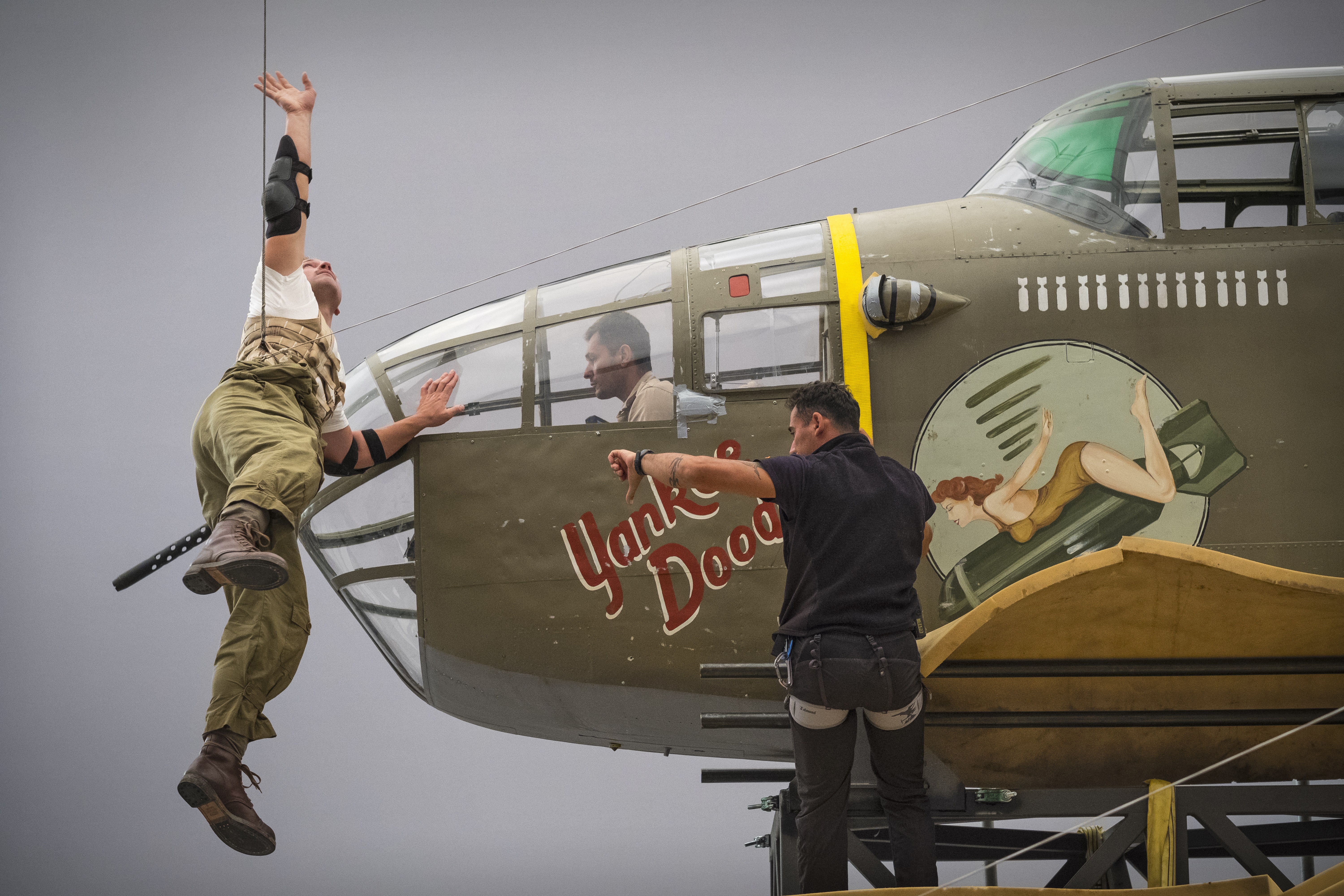 Gropman said the most intense scene was in the finale where Yossarian crawls to the fuselage of the plane and tries to save Snowden (Harrison Osterfield). “It almost amazes me, watching that scene, that it doesn’t look as claustrophobic as it really is,” he said. “You could reach your arms out and touch the shell of the walls of the plane on either side. And that was the center section. When you go to the nose or the tail, you have even less room.

“We talked about how we were going to split the sections, one from the other, and blend those pieces together. Carefully mapping all of that out, you could dissect a plane in four pieces or eight pieces and pull out this section or that section. When we finally got the fuselage from the [art department], we talked about pulling some of the skins to give us a different portal into shooting the plane, but, in the end, there’s none of that. We stayed right within that plane.”