The ‘Level Up’ hitmaker says that she is ‘honored’ to be ‘a part of this beautiful ensemble and historic film,’ in which she is set to play the adult version of the ‘Little Mermaid’ star’s character Nettie.

AceShowbiz –Ciara has officially joined the cast of “The Color Purple” musical film. Taking to social media to share the news, the “Level Up” hitmaker said that she’s “truly grateful” to be a part of the “historic film.”

On Tuesday, March 22, the 36-year-old singer/actress took to her Twitter account to tell her fans that she’ll be starring in the upcoming movie. “Honored to be a part of this beautiful ensemble and historic film, ‘The Color Purple’,” she tweeted. She also noted that she’s “truly grateful,” along with a purple heart emoji. 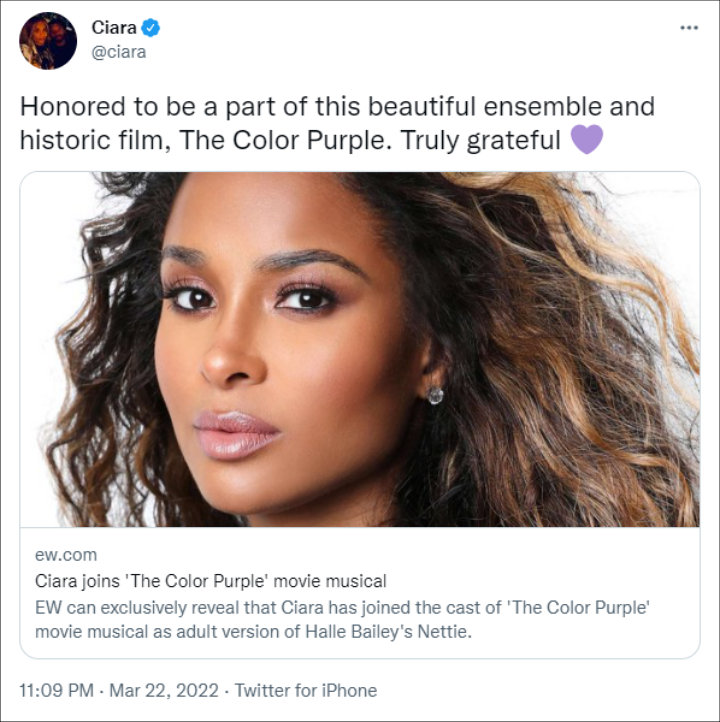 Ciara is ‘truly grateful’ to be part of ‘The Color Purple’ cast.

In the upcoming film, which will be produced by Steven Spielberg and Oprah Winfrey, Ciara reportedly will star as the adult version of Halle Bailey‘s character Nettie. Aside from “The Little Mermaid” actress, the movie will feature Fantasia Barrino, Taraji P. Henson, Colman Domingo, Danielle Brooks, Corey Hawkins, Louis Gossett Jr., David Alan Grier and H.E.R..

According to Entertainment Weekly, production on the film is scheduled to begin this month in Georgia. Marcus Gardley has written the screenplay for the film, which was adapted from the award-winning Broadway musical based on Alice Walker’s 1982 novel.

“The Color Purple” follows the lives of several black women, namely Celie Harris, Nettie Harris, Shug Avery and Miss Millie, in the American South in the 1930s. The original Broadway musical of the story debuted in 2005 and earned 11 Tony Award nominations a year later, with actress LaChanze winning a Tony for her role as Celie.

Last month, it was announced that Fantasia, who previously played Celie during the initial Broadway run of “The Color Purple”, will reprise her performance of the leading role, which was played in the 1985 film by Whoopi Goldberg. “I had seen the movie, but it’s such an inspirational play,” said the “American Idol” season 3 winner at the time. “I was crying. I was saying, ‘Oh, Lord, I hope I’m not the only one crying!’ “

Also in February, Taraji confirmed on social media that she’ll play Shug Avery in the forthcoming movie. The Cookie Lyon depicter on “Empire” shared the news of her casting via Instagram Story and Twitter.

Taraji herself is no stranger to starring in musical performances. The actress recently stunned audiences with her singing skill when she played the role of orphanage owner Miss Hannigan in “Annie Live!“. Of her character, she said, “Playing the villain is always fun. … With Miss Hannigan, there is so much to work with and dig deeper into,” before highlighting, “It’s just such a fun and iconic character to play.”