Actor Clint Howard worked alongside his older brother Ron Howard on The Andy Griffith Show. The younger Howard played one of the show’s youngest characters, Leon the peanut-butter-eating kid.

A preschool-aged Clint was outfitted in a cowboy hat, checkered shirt, and half-eaten peanut butter sandwich and sent out to wander the streets of Mayberry.  As the actor himself remarked, he was absolutely “adorable.”

Clint appeared in four episodes of the comedy as Leon the sandwich kid, according to IMDb: “The Bank Job,” “One-Punch Opie,” “A Black Day for Mayberry,” and “The Shoplifters,” all airing between 1962 and 1964.

According to his brother Ron, Clint cinched the job while visiting the show’s set along with their dad, Rance.

“It just kind of happened,” Ron told the Television Academy Foundation. “My brother Clint just started hanging around the Andy Griffith set. The director, Bob Sweeney, just one day kind of recruited him. Clinton was wearing a cowboy hat and a toy gun. They thought that was a cute character. He became Leon, this kid that was always offering Barney Fife a peanut butter and jelly sandwich.” 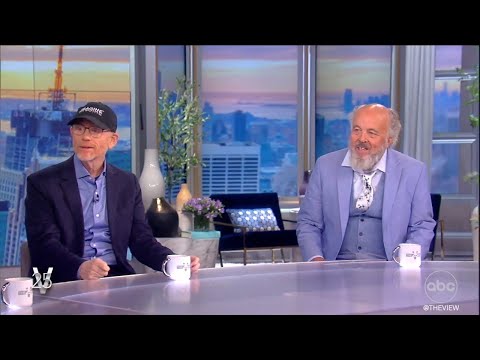 Ron and Clint Howard in 2021 published their joint memoir The Boys, chronicling their years in show business from childhood, and their parents’ roles in helping them navigate and build their acting careers.

For his part, Clint still remembers his work as Leon, even at that very tender age, writing: “I picked up my acting chops and on-set savvy by osmosis. My clothing landed me my first job. Dad loved anything to do with the Old West. Knowing this, Mom dressed me up as a toddler in a perfectly sized cowboy getup: hat, kerchief, snap-button western shirt, fringed buckskin jacket, and boots.”

Clint observed in his memory of his visits to the Griffith set, “I looked friggin’ adorable.” So adorable, in fact, that as his brother Ron stated, Sweeney found a job for young Clint.

“At first I was just an extra, but then the writers developed a running bit for my ‘character,’ such as he was, named Leon,” Clint wrote.

Clint noted that Leon, “like Harpo Marx,” never communicated, not with words at least.

“We never found out who his parents were or if he even had parents,” he continued. “… a generous soul, Leon would come across a grown-up and thrust his sandwich in the adult’s face in a ‘Here, take a bite’ gesture. … Leon’s most common foil was Barney Fife, to whom he offered the sandwich at inopportune moments.

To say Clint has worked prolifically throughout his nearly 60-year career is an understatement. He’s appeared both in his brother’s films including Apollo 13 and Cinderella Man, and has also made his own name in the industry, with over 250 acting credits recorded on IMDb.