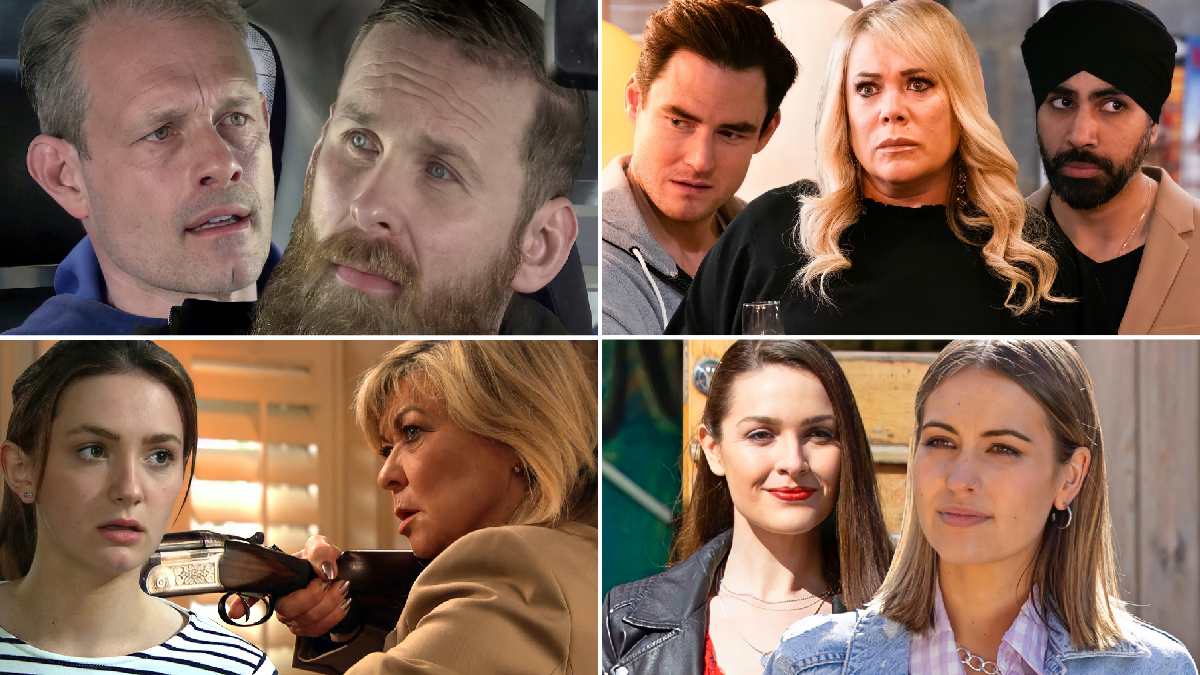 It’s that time of week once again when we bring you brand new soap spoilers – and if you prefer your soap spoilers piping hot, then you’re in for a treat!

Coronation Street’s Nick Tilsley (Ben Price) risks it all to save Sam Blakeman (Jude Riordan), but he ultimately finds himself in a spot of bother when Harvey Gaskell’s (Will Mellor) thug captures him – and issues a dark threat!

Sharon Watts (Letitia Dean), meanwhile, is fed up with flirty sibling Zack Hudson (James Farrar), who gets on the wrong side of Kheerat Panesar (Jaz Deol), which forces the EastEnders legend to make a shock decision.

Emmerdale stalwart Kim Tate (Claire King) fires her gun at a shock intruder, as her paranoia gets worse – but just who has she gunned down!

And Sienna Blake (Anna Passey) succumbs to temptation in Hollyoaks, as she and Summer Ranger (Rhiannon Clements) have sex!

Yes, it’s quite the eventful week in soapland next week, and here’s everything you need to know about what’s in store.

Nick returns to the street in the wake of Sam’s disappearance. Sam, meanwhile, is terrified, as he’s trapped in the van and is unable to call for help. Nick gets into a text, but the driver is one of Harvey’s thugs! He hands him a burner phone, revealing if he, Leanne and Simon fail to retract their statements, he’ll never see Sam again.

Emma is delighted when attractive lad Curtis offers to help her move some barrels into the cellar, but when Steve clocks him, he’s livid, as it turns out that Curtis is the one who knocked him off his bike during the charity fundraiser. Steve later has a change of heart though, and sets out to put things right with Curtis.

Sharon tells Gemma that she’s decided to move back home, but Jenny is left suspicious when she reconsiders. Johnny recognises Sharon from prison, but he has no knowledge of this mentoring scheme she was talking about. Jenny asks Gary to find out what he can about Harvey, and ultimately Jenny makes the connection. Sharon, however, clocks the chemistry between Jenny and Ronnie, and warns her to stay away!

The gym launch arrives, and Sharon is nervous. Zack, meanwhile, turns on the charm with an important and potential client, so Kheerat intervenes. He prises the young man alway from the client, and locks him in the locker room – cranking up the music to drown him out. Sharon later makes her speech, and Zack’s shouts can be heard. Nancy releases him from captivity, but Zack takes matters into his own hands. Sharon is seething as her guests watch on, and she instructs her brother to pack his bags.

Mila spots her sister Kioni pocketing a candle. She asks Iqra for some privacy, and Kioni explained that their mum is taking her away for the weekend soon – leaving Mila tense. She’s worried when Kioni mentions the trip is in 2 weeks, and therefore she asks Kathy if her sister can stay for a bit – she’s determined to protect her.

Kat returns home from the hospital with Phil right by her side. He’s subjected to the usual Slater chaos almost immediately, leaving him agitated. He bolts, leaving Kat upset, but he later returns to save the day – leaving Kat very impressed.

Kim viciously takes her concerns out on Gabby. Her paranoia worsens, and she sends Will packing – bolting the door behind him. The drugged brandy has her hearing all sorts – such as intruders who aren’t really there. The following day, however, she’s taken back to see a figure enter her home via CCTV, and therefore she withdraws her gun and fires a shot!

Lydia is mortified to see what’s being posted about her online, and later a brick is thrown through her window. Samson worried about leaving her on her own. Lydia sets about reporting the incident to the police, but she’s robbed outside her front door by a pair of lads. Samson recognises the lads, and chases them away. He’s upset he didn’t defend Lydia more, and when Sam takes her to the police station, he puts a crowbar in his bag – desperate for revenge.

Liv finds her mum Sandra at a caravan park, but she’s horrified to realise she’s been back in the UK for several months now – without making contact. Sandra offers her some booze, and Liv struggles to resist, as she downs the vodka. They drunkenly dance, but Liv falls to the floor. She watches a heartfelt video from Aaron – who pleads with her to come home. Sandra, meanwhile, returns with more booze. What will Liv do?

Sienna enjoys Summer’s mind games, and opens up to Grace about how there is a woman in her life. Grace encourages her to go for it! Summer is desperate to get Sienna alone, and she eventually does just that when she corners her in the school’s dance studio. The chemistry sizzles, and one things leads to another, as Sienna gives in to temptation. Little do they know, however, that Brody is in the school, and he’s looking for Summer!

Juliet sets Sid up with a schoolmate named Raya. The date goes surprisingly well – that is, until Courtney arrives! Courtney later sets her sights upon an intoxicated Sid. She does her best to cheer him up, but when he starts to pine for her again, she reiterates that she has no feelings for him whatsoever, given that he’s a student.Sid snaps a picture of them, and Courtney realises a shocking rumour has been spread about her, and Nancy wants a word regarding her relationship with Sid!

Brody receives a surprise job offer. The catch? It’s in Manchester! He asks Summer to come with him – but will she agree? What’s more, will he take the job himself?