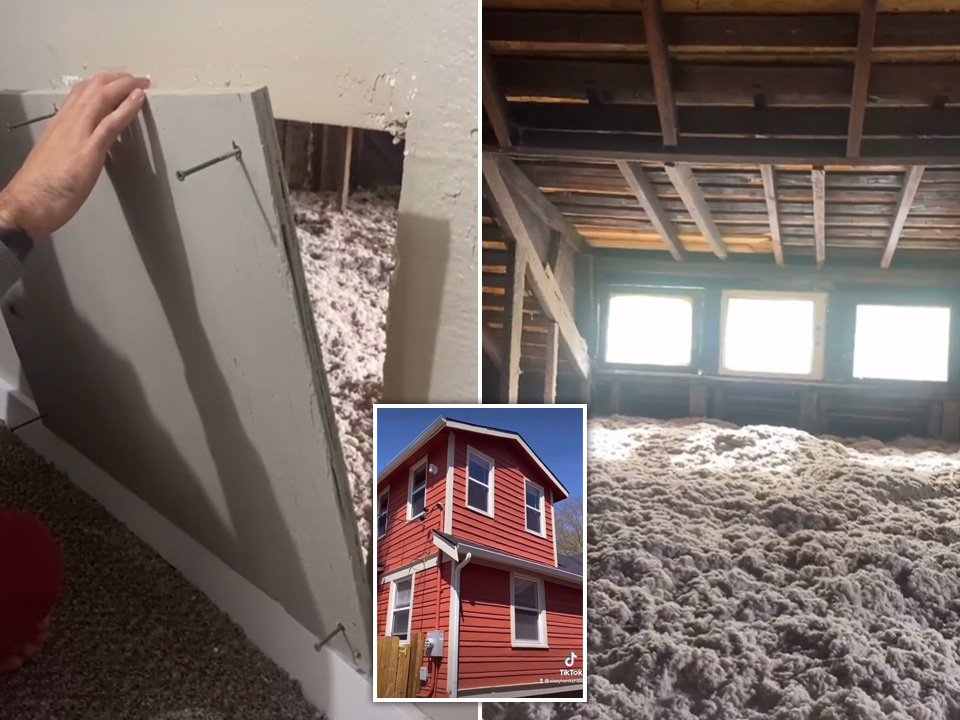 A couple who bought a house without seeing it due to the pandemic have found a secret attic sealed off away from the rest of the house.

Strangely, a previous owner had installed latching windows and had also finished the wood floors, which were found covered in insulation.

The woman shared their strange finding on TikTok, where she posts under the username sissyhankshaw.

In a video, she explained: ‘So because of the pandemic, we bought this house on the internet without ever seeing it before, and when we finally saw it in person after two months of looking at it online, we realised that it had something really weird about it that we had not noticed from the 18 pictures we had stared at for, like, the past couple of months.

‘So the front of the house is like a house shape, and then the back has this little tugboat-y sticky-up situation that my office is in.’

In the video, the camera pans over the outside of the red house, where you can see an extra part of the upper floor that has a window and would be big enough for another room.

When you buy a house without ever seeing it in person before, check for secret rooms I guess ??????

‘As you can see,’ she says as the clip shows her office, ‘there is no access to the other part of the attic at all anywhere.’

The video, which was captioned ‘When you buy a house without ever seeing it in person before, check for secret rooms I guess’, then shows other parts of the house, as she shows the ceilings offer no way to access the other part of the floor above.

The clip ends with her showing the inside of a closet with a board screwed into the bottom of the back wall, as she says again that there’s no way to get to the other part of the attic ‘except for this’.

In a second clip posted the next day, Sissy shows how she and her partner unscrewed the little board to find the extra secret room on the other side.

In it, she says: ‘I just find it so interesting that there’s no access to this anywhere in the house. This wall that we entered through was new.

‘There’s finished floors up here and I just think it’s so interesting they’d spend the money to finish the floors but not actually finish this room.

‘While it does have new wiring in it, we also have a new roof, so someone’s been up here recently.’

She added that their house had been inspected ‘multiple times’ and everything was safe, and said: ‘I just think it’s interesting they put latching windows up here.’

The first clip Sissy posted earned a whopping 1.2million likes, with people waiting on tenterhooks for the update showing the inside of the secret attic space.

Some commented about the couple’s decision to buy a house without seeing it, to which Sissy replied in another video: ‘It was not the worst decision we ever made.’

She went on to explain that not only they did they not live locally and chose not to make extra tips during the pandemic, but she also works in real estate and therefore felt secure making the decision to buy from afar.