Courteney Cox is reminiscing on what it was like to work with Jim Carrey on the film “Ace Ventura: Pet Detective” and is playing coy about a possible romance off screen. The actor appeared on Howard Stern’s SiriusXM show on June 23, along with “Friends” co-stars Jennifer Aniston and Lisa Kudrow, where she dished some thoughts on Carrey and what it was like making the comedy.

Carrey and Cox — who played Ace Ventura and Melissa Robinson in the 1994 comedy — “became really good friends,” according to the actor (via Yahoo!). Looking back on their time together, Cox remembers “cracking up all the time.” She detailed the first time they rehearsed together and how Carrey “was just playing it straighter. And then he turned it on when we started filming and I thought, ‘Oh my God, he’s the funniest person.'”

In a 1994 interview, Cox said that while the “Mask” star is known for his humor, “He has another side to him, believe me, that’s very serious and actually really intense.” But, she admits, “[the comedy] is there all the time.” Cox elaborated, saying, “he rolls out of bed” and the comedy stays “in him 24 hours a day” (via People). While she gushed about how much fun they had on screen, Cox is finally sharing how she felt off-screen.

Courteney Cox was crushing on her co-star 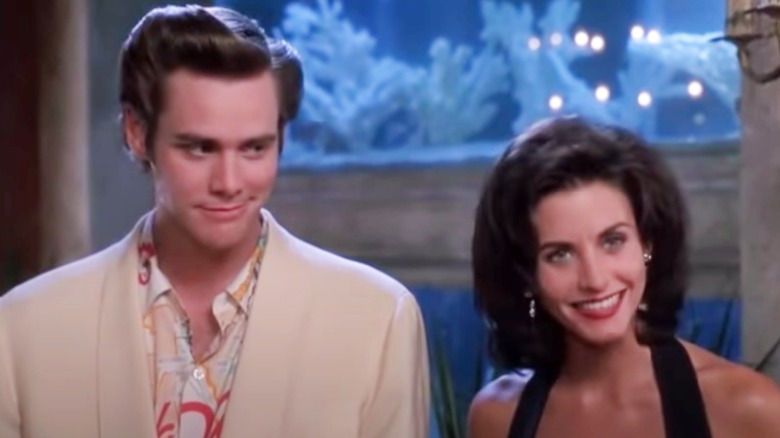 Courteney Cox couldn’t deny there was a connection with Jim Carrey while filming the hit comedy, “Ace Ventura: Pet Detective.” So when Howard Stern asked on June 23 if there was more to the relationship than we knew, Cox admitted that there was in fact a spark. “There was a crush for sure,” she admitted (per Yahoo!).

“But nothing romantic?” Stern pushed to which Cox diverted the question and laughed it off. “I don’t … I’m going to go to the bathroom,” she tried to hide. The host continued to press, trying to get some more intimate details out of Cox but ultimately failed. “The reason I ask that is there are these two talented people, I can’t see how that wouldn’t happen,” he said. “If I was around you, I would have at least tried.” If Carrey tried or didn’t, that will just continue to be a secret!

Not only did Stern try to find out if something was going on with Cox and Carrey behind the scenes, but he also pushed Jennifer Aniston in the podcast episode to spill if she and fellow “Friends” alum David Schwimmer were ever intimate off air. Stern bluntly asked if she “banged” Schwimmer, to which she responded (via People), “No, we never, on my life.” Aniston continued: “Courteney and Lisa would know if it did because they would’ve heard about it. They can vouch for me,” she attested, with Cox chiming in saying it’s “true.”