Dan Walker, 43, was on hand to host BBC Breakfast alongside Louise Minchin, 52, as they informed viewers of the latest headlines. To bring some light-hearted entertainment to the programme, the pair interviewed a trio of internet sensations, who have gone viral for creating a dance routine to the BBC news theme tune. However, when the former wanted to give a demonstration of his own, it led to chaos.

After speaking with their guests, Dan learnt a couple of the dance moves before putting them all together to complete the routine.

As her co-star got up from his seat to give the dance demonstration, Louise said: “I’m doing the really important bit, I’m filming him.”

Viewers then watched as the broadcaster did his best to follow the dance moves his guests were also completing it at the same time.

When the routine concluded, the journalist threw his hands into the air and in the process, ended up knocking one of the lights above him.

“I just punched the light in the studio,” he informed those watching at home with a nervous laugh. 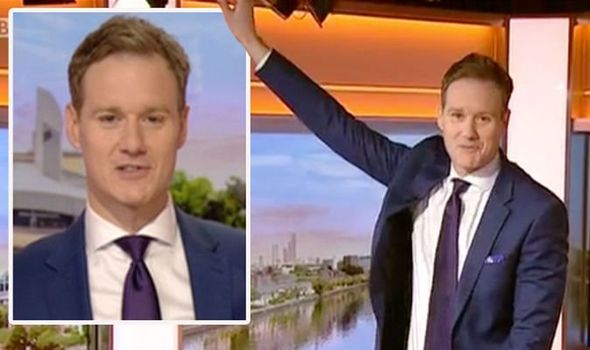 This broke the set-up of the studio as the lights are positioned in a certain way to help keep the hosts in the spotlight.

After trying to rectify his error, the broadcaster was seen trying to reposition the broken set-piece before retaking his seat.

“The slight problem there was I actually punched a light in our BBC studio,” Dan told the guests, who had missed what happened.

“Don’t worry everybody, I’ve got it on film,” Louise joked as her co-star then concluded the interview.

I actually punched a light

Taking to Twitter, those watching at home were in hysterics at seeing the presenter trying to complete the dance demonstration.

A second added: “#BBCBreakfast Well, I for one enjoyed something a bit lighter for a change; seem like three lovely bubbly girls who have at least tried to do something creative.

“Well done Dan for giving it a go. I’m sat here cradling my first cuppa tea and nothing, nothing would shift me,” they continued.”

“#bbcbreakfast My licensing fee is totally worth it to see Dan dancing. Join in Louise,” a third viewer remarked.

Taking to his Instagram page moments after the incident, the presenter shared a clip from a viewer of him breaking the set.

The short video, which was captioned with the quote “Monday morning feels,” was viewed by the journalist’s 162,000 followers on the platform’s Story feature.

Dan was also on hand to present a late-night warm-up show for the SuperBowl on the BBC on Sunday evening.

Despite working unsociable hours, the broadcaster has explained he “doesn’t mind” being on-screen so early in the morning.

Dan said: “I don’t mind the hours. It gives me much more time to spend with my family, picking the children up from school and taking them to clubs.

“I love working with Louise [Minchin]. She’s a really good laugh and great at her job. She’s been excellent at easing me in. I love the whole team and it’s a great programme to work on,” he told Aga Living.