Debris began falling on NBC’s Monday-night lineup this week. Will you keep tuning into the new sci-fi drama from Fringe boss J.H. Wyman?

Debris stars Jonathan Tucker (Kingdom) and Riann Steele (The Magicians) as Bryan Beneventi and Finola Jones, agents for the CIA and MI6, respectively, who have been partnered for the mission of tracking down the debris — tiny and quite large — of an alien spacecraft wreck spotted six months prior by Finola’s astrophysicist father. 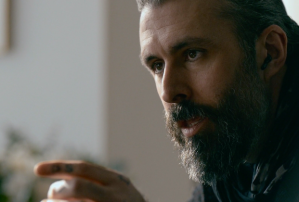 The first episodes opens at a New York hotel, where a businessman is hawking not one but two found pieces of debris to a bearded man (Ash, played by Scroobius Pip) and his partner. When the feds roll up, having gotten wind of the deal, the three men scatter. Ash and his friend at one point seemingly vanishing after turning a corner; shortly thereafter, their seller comes crashing down onto the roof of a car parked out front. Meanwhile, a hotel maid comes across one of the debris pieces that was to be sold, and when she touches it she and her cart disappear into the floor… and come crashing down inside a ballroom 14 stories below. And yet the ceiling above is pristine.

Finola likens the found piece of debris to one from Manchester, in its composition, though its color is darker. Finola’s boss, Priya (Anjali Jay), checks in, and we get our first hint that MI6 and the CIA may not have identical agendas. Similarly, Bryan phones his own colleague, Maddox (Norbert Leo Butz), who asks how the tentative partnership is going.

Elsewhere, a (creepy) young boy is out for a drive, through a rural area, with a woman he calls Mom. When the woman’s eye starts to bleed, the car eventually rolls to a stop, and she appears to be lifeless. The boy opens the driver’s door, pulls her out, and then watches as her lifeless form floats — several inches off the ground — across the road, toward a nearby field.

During their jet ride to this new debris event, we get some insight into Bryan (an Afghan War vet whose mission is is to make sure the good guys get any alien tech before anyone else) and Finola (who believes the debris won’t just cure illness but change course of humanity). It is during this exchange that we also learn how Finola’s late father, through a Hubble telescope, first found the alien spacecraft wreckage, though she maintains she didn’t get her job because of her last name. 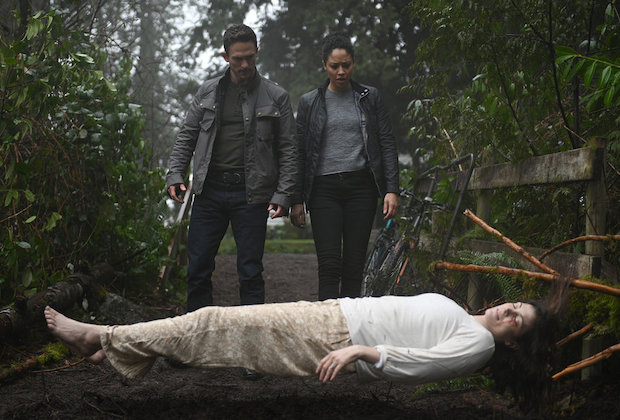 Bryan, Finola and their team find the “floating” woman ensnared in some barbed wire, and when they set her free, the body floats not in the direction of the wind but toward a patch of land where several other bodies are floating/swirling in a circle. Bringing the lifeless bodies to an airport hangar for examining, they find nothing they have in common. Seeking out one of the deceased’s non-responsive next of kin, Bryan and Finola find the man’s wife also dead/floating in the backyard, not far from a sizeable mass of debris. Inside the couple’s house, Bryan sees that their son, Kieran, is the same kid who was seen at a gas station with the first floating woman. They interview couple’s daughter, Isla, who is at a nearby boarding school, and she asks if they are playing some sort of sick joke — because Kieran died seven months ago in a car accident!

Bryan wonders, did the debris out back “pull the boy’s body from the ground and add meat to his bones?”  Nope, Finola says, because the lad had been cremated. Piecing together assorted clues (Isla was at first urged to rush home for unbelievable news, then just as soon warned to stay away), Bryan and Finola glean that Kieran came back, by whatever means, and began using his parents as “batteries” that he quickly drained. He now is out there doing same with strangers.

After an up-close encounter with the mass of debris out back, Finola realizes that it almost feeds on grief, for it showed her a glimpse of her dead mother. What’s more, the other bodies back at the hangar have suddenly begun chanting her mother’s name! Kieran, they surmise, is a manifestation of his own mother’s grief.

Meanwhile, the mysterious Ash and his friend appear near the backyard debris mass. As soon as they are spotted by Bryan’s colleague Tom, they pop something in their mouth to “dematerialize,” and then rematerialize far away, beneath an overpass. Ash’s friend, alas, materialized partially inside a cement pillar, so Ash puts him out of his misery with a gunshot.

Having learned of another lady who vanished after being approached by Kieran, Finola and Bryan realize the kid is taking these people on the same drive during which he died, always stopping at the same gas station convenience store. Racing there, Bryan confronts the second lady and tries to convince her that Kieran is in fact not her son. Finola, meanwhile, tries to talk to Kieran in the car out by the gas pump. (“Kieran, you don’t belong here,” she says. “I’m wanted here,” he counters.) As Finola is overcome with emotion, the lady inside the convenience store begins to bleed out one eye. And just as we see Finola touch Kieran’s hand — and thus become the latest target of his sway/energy source — the older woman slumps to the ground, and floats. Bryan races outside, but sees that Finola, Kieran and the car are gone.

Suspecting that Kieran’s mom’s grief is fueling all of this, Bryan begs Isla to make amends with her seemingly lifeless mom in the hangar. Isla does just that, saying a lot of things she clearly needed to say/her mom needed to hear, until suddenly Mom’s eyes pops open and she gasps — as do all of the other found bodies/”batteries.” At that same moment, standing near the field from before, Finola herself gasps out of her fugue state, and Kieran is gone. 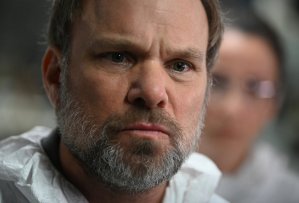 Back aboard their jet, Bryan learns from Maddox that Ash’s ill-fated friend was an English national and former SAS — and that he and Ash arrived from Heathrow not too long ago with a third person: George Jones, as in Finola’s dead father, who is traveling under an alias. Maddox makes clear that MI6 must not be apprised of this intel, to which Bryan remarks, “Do you know what you’re asking me to do? That’s her father.” After assuring Bryan that he can handle the lie of omission, we see Maddox drive a cart into a massive hangar, where hazmat-suited scientists are carefully adding the latest found piece of debris to what is starting to take the shape of an alien spacecraft hull….

What did you think of this first piece of NBC’s Debris?