If Dexter Morgan thought he had problems before, Sunday’s episode of Dexter: New Blood raised the stakes in some major ways.

Not only did things take a rough turn with teen son Harrison — the boy OD-ed at a party! — but someone close to Dex learned the stone-cold truth behind his “Jim Lindsay” alias. Plus, an old face from the series proper made a surprise return, and Kurt Caldwell’s true villainy was more or less confirmed. It was a meaty episode, so let’s dive right into this recap of “Runaway.”

While Dexter contemplates whether Harrison remembers his mother’s death, Deb fires off a harsh truth: “What Harry did to you was child abuse. Teaching you to become a serial killer and how to get away with it? Look where the f–k that got us!” Dexter wants to be honest with Harrison, but his inner Deb screams that doing so would make Harrison worse than he is.

Logan tells Molly and Angela that Matt’s credit card reports confirm he’s been at a hotel in New York City for the last three nights. While Molly is bummed that her podcast episode is likely dead, the two women decide to take a road trip to question Matt face-to-face.

Harrison claims the razor in his room was strictly for protection since he was getting robbed in the street when he was on his own. Dexter mentions that Ethan’s side of the story is “a lot different than yours,” which angers the teen. Harrison then storms out, despite his dad’s plea for him to trust him.

Zach brings Harrison to a “kill list party” where all of the invitees were kids targeted by Ethan. A random girl plants a big one on Harrison for saving her life, and also hooks him up with an ecstasy pill, which he chases with beer. The weirdness continues when another student asks Harrison to carve an “H” into her foot with a knife. Things quickly get hazy, so Scott gives him a “pick-me-up.” Harrison, drugged out of his mind, tells Audrey that his dad’s name isn’t even “Jim Lindsay” (whoops!) seconds before he collapses.

Audrey calls 911, and when Harrison comes to, Logan is standing over him. Logan questions Scott, and discovers the “pick me up” was Oxycontin… laced with fentanyl. In the next scene, Dexter runs down a hospital hallway. A nurse says Harrison is lucky to have survived his overdose. Logan reveals that the drugs were from a street dealer named Miles, and man, he reeeally should’ve kept that information to himself! 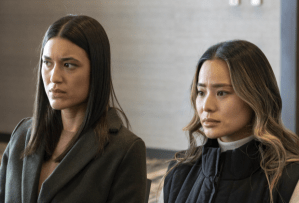 THE CREEPY CABIN | Meanwhile, Kurt brings Chloe to her new apartment, and the girl is beyond ecstatic. She asks what he wants in return for the free room and board, and he only says to pay it forward. If she survives this hellhole, that is.

It doesn’t take her long to figure out she’s trapped inside. She finds the same red light and camera that Lily did, and later begins undressing for the camera. “This is what you want, right?” she yells. Kurt is watching, but when she starts stripping, he flies into a fit of rage. Chloe reaches under her pillow and pulls out a large knife.

Kurt unlocks the door and tells her she’s free to go. “Make me!” she screams. She sits on the bed holding the knife, but Kurt quickly overpowers her and drags her outside. “Run, bitch,” he orders, while holding a huge rifle. Instead of fleeing, she runs directly at him, and he fires straight through her eye. He panics, stating that this wasn’t how it was supposed to happen. “You ruined everything!” he yells, as he hits himself in the head. The man is totally unhinged.

THE CITY | A hotel clerk confirms that Matt already checked out, and refuses to let Angela see the security footage. Nothing a little threat from a police offer can’t fix. The clerk finally shows her the footage, but Angela knows the man on screen is not Matt. She snaps a photo, wondering why Kurt would lie. 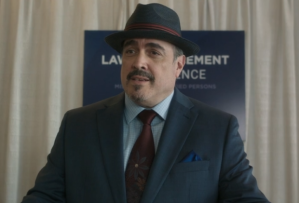 She also attends a law enforcement conference about missing persons, and the first speaker is none other than Miami metro Homicide Captain Angel Batista! Batista breaks down the Bay Harbor Butcher case, stating that the butcher’s victims were all guilty of crimes they got away with. “They actually thought it was a cop from the same department,” says Molly. “Can you imagine being next to a serial killer for years and having no idea?” Ummm…

Later, Angela picks Batista’s brain about Iron Lake’s missing women case. He tells her to listen to her gut. He also says it reminds him of another case, the Trinity Killer. A young detective named Debra Morgan trusted her gut and never gave up. He says it was a tragic story. Her brother died, too, and he had a cute kid named… Harrison.

BACK IN IRON LAKE | Dexter snags some syringes, plastic sheets and ketamine from a local doctor, claiming it’s all for his injured goat. With a drug-filled syringe in his pocket, he enters a bar in search of Miles. He finds the guy he’s looking for, and pretends to be searching for a score. He follows Miles outside, but when he sticks the guy with the needle, the cops pull up. “Time for Plan B,” he thinks. He punches him, staging a fight and playing the role of an angry dad. Logan pulls Dexter off Miles and tells him to follow them to the station.

Logan gets another name out of Miles, Jasper Hodge, who is apparently the man who makes the pills. When Logan gives the secretary Jasper’s last known address, Dexter hugs her so he can peek at the info he needs.

As he sits outside Jasper’s house, Deb tells Dexter that he’s not even following his code. This is vengeance, she says. He mutters a “yup” before getting out of his truck, putting on gloves and prepping another syringe. Inside the house, he finds pills all over the floor of a room that looks like a drug lab. He finds his target and sticks him with the needle.

He ties Jasper to a table and surrounds it with photos of all the kids who died from his drugs. Just as he’s about to plunge his knife into Jasper’s chest, a car pulls up outside. It’s Logan. Dexter covers Jasper’s mouth and puts heaps of white powder under his nose. The dude ODs, and Dexter places him back inside for the cops to find.

Harrison tries to run away, but Kurt finds him outside near his diner. He offers to buy him a hot meal before he takes off and eventually convinces Harrison to stick around.

When Angela returns, Aubrey tells her what Harrison said about his dad’s name. It only takes one Google search for her to find an obituary for a “Dexter Morgan,” and the photo attached looks awfully like her boyfriend Jim…

We’re halfway through New Blood‘s run, and Dexter’s secret is officially spilled! Any big theories percolating? Drop ’em below in a comment.