LOS ANGELES — When Rob Marshall, the director of the film “Mary Poppins Returns,” realized that Dick Van Dyke was the same age as the grizzled London banker he played in his second role in the original 1964 “Mary Poppins,” Marshall had a eureka! moment: Why not ask Van Dyke, now 93, to play Mr. Dawes Jr., the banker’s son, for the sequel? At the time, Marshall had not met the tripping-over-the-ottoman star of “The Dick Van Dyke Show,” but the filmmaker wasn’t worried that Van Dyke wasn’t up to the physical challenge. Marshall recalled that he once saw the actor at a Malibu grocery store, “and he was literally dancing up and down the aisles while he was shopping.”

Set in Depression-era England, “Mary Poppins Returns,” which opened on Dec. 19, follows that tinkly-voiced child-minder (Emily Blunt, stepping into the Julie Andrews part) as she descends from the sky again to brighten the lives of the Banks family: the rumpled widower Michael (Ben Whishaw), his three young children and his activist sister, Jane (Emily Mortimer). Lin-Manuel Miranda shows up as Poppins’s sidekick, Jack, a lamplighter. It isn’t until late in the film that Van Dyke makes his bushy-haired, bewhiskered appearance, but Marshall said that the veteran hoofer (who also played the chimney sweep Bert in the original) aced his cameo — a two-minute monologue with a bit of ad-libbing, a jump onto a desk, followed by dancing — in “two takes, maybe three. He just nailed it.”

[Read our interview with Lin-Manuel Miranda on “Mary Poppins Returns.”]

Van Dyke has been practicing since his high school days in Danville, Ill., where he jettisoned plans to join the ministry soon after he discovered drama class. He went on to do it all: He was one-half of a touring mime team, a television announcer, a radio disc jockey. It was the theater director and choreographer Gower Champion who saw potential in Van Dyke’s rubbery-legged agility and cast him as the lead in a Broadway production of “Bye Bye Birdie.”

Last month, he attended the “Mary Poppins Returns” world premiere at the Dolby Theater. It followed a couple of chaotic weeks. The Woolsey wildfire crept so close to his Malibu home that he and his wife, Arlene Silver, 47, had to be evacuated. (The couple met through her work as a makeup artist.) At the premiere, Van Dyke, spry but holding a cane, had to navigate a press-filled red carpet nearly a city block long. When a wall of paparazzi roared, “Dance for us, Dick!,” the blue-eyed star smiled and obliged with a jaunty soft shoe.

Before Van Dyke was swallowed up by the hoopla, he sat on a folding chair and spoke of what it was like to revisit “Mary Poppins” after a 54-year recess; how the “Poppins” author, P. L. Travers, would have regarded “Returns”; and how he stays in shape. A week later, by phone, with his wife gently keeping him on course, he answered a few more questions. Here are excerpts from the two conversations.

Does performing a showstopping desk dance at your age require special preparation?

No. I’m always dancing. I work out every day, mostly in the pool. I go to the gym and do a little bit of weight lifting, but at my age, not a lot. I am arthritic, I must say. Too many pratfalls. [Pause.] But that wasn’t the problem.

What was the problem then?

Making sure I sounded like a Brit. I’ve taken it on the chin for 60 years about my atrocious Cockney accent in the first movie. No one has ever forgotten it. Because of that, they had a language gal almost handcuffed to me. She made me sound pretty good. They won’t laugh at me on this one.

You’re the only actor from the original to return. Did you polish up a few of your best “Mary Poppins” anecdotes? 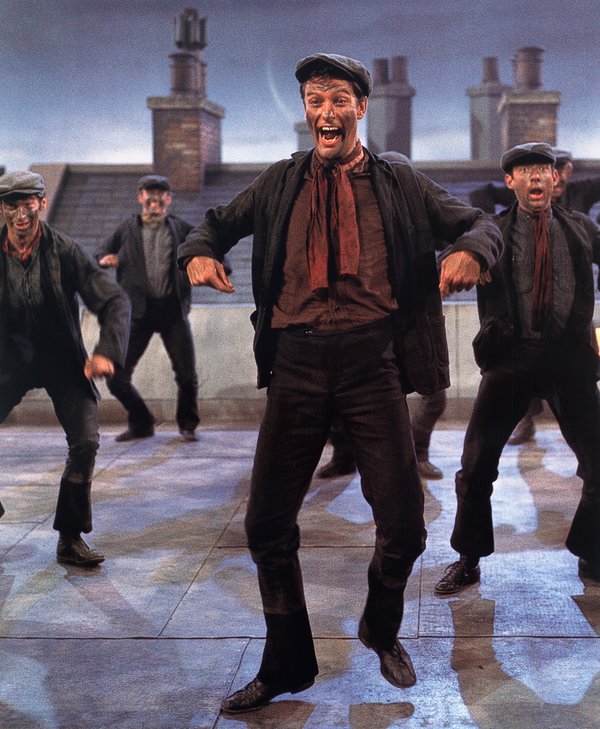 Oh, sure. We had to fly constantly. So [the new cast] asked a lot of questions about that. One day [on the original movie] we were all up there doing “I Love to Laugh,” and they broke for lunch, and everybody left and forgot that we were hanging up there. It must have been 15 minutes before somebody realized and came and let us down.

What did Emily Blunt quiz you about?

I don’t think she asked me anything. I think I asked her more questions than she asked me. I said, [in an exaggeratedly shocked voice] “The Girl on the Train” is playing Mary Poppins?”

He made me do a screen test, so I got all made up. Then we stood out in front of the Banks house, and I just fooled around a little bit as the character. I think what got him was at the end I pretended to pee in the bushes. Then he said, “You have to give a $4,000 donation to CalArts” [California Institute of the Arts, the visual and performing arts school founded by Disney in 1961]. So I said, “It’s worth every penny.” That’s the first time I ever bought a part. This time, I got paid.

You’ve said that P .L. Travers hated everything about the original — including you and Julie Andrews. Do you think she’d be happier with the sequel?

She’d probably dislike it just as much. [Laughs.] But did you know that Emily Blunt read all the Mary Poppins books? So she gives it a little different approach than Julie did. Emily’s is closer to the book — she’s a little more stern. Miss Travers might have been a little happier with that.

Do you hope that a new generation of children will fall in love with Travers’s magical flying nanny?

Yes, I do. I get a lot of mail from little kids who love Mary Poppins. There’s something timeless about what Walt did. I think this movie could have used a little of his influence. I thought there was too much computer animation; sometimes it went on too long and didn’t move the story forward. But I’m hypercritical. [Laughs.] Other than that, I think it’s a great tribute to Walt.

In 1957 you made your television debut on “The Phil Silvers Show.” Sixty-plus years later, you’re still working. What’s your secret?

I don’t know. I was talking to my good friend Bryan Cranston, who I met when he was on my detective show, “Diagnosis: Murder.” I was complimenting him on his [Lyndon B.] Johnson — it was insane how good he was. He said to prepare for the role, he watched miles and miles of film of him, then read everything that he could get his hands on. I told him: “My God. I just hit my marks and hope I think of something.” I don’t do any background study or preparation. I once went to a dramatic coach years and years ago. I was playing a rather heavy part about an alcoholic. And he said, “Let’s look at the subtext,” and I said, “I beg your pardon?” [Laughs.] I’m strictly a superficial actor.

You campaigned for Bernie Sanders in 2016, correct?

I did. I introduced him at a number of rallies around California. He just gave a dynamic speech on C-Span over the weekend, which I taped. It left no issue untouched. He has the common good in mind. Medicine costs a fortune. It doesn’t work the way it does in Europe. He wants to fix all that. I simply believe that all people should have health care.

What’s in the works after you finish promoting “Mary Poppins Returns”?

I don’t know — certainly not retirement. [Laughs.] I have a jazz band that I sing with and a quartet. We perform a lot.

When people hear the name “Dick Van Dyke,” what do you hope springs to mind?

That I made ’em laugh. That I lifted their worries a little bit. I’ve always tried to do family-oriented entertainment. I lost a lot of money over the years, turning down good parts because it didn’t fit my idea of the kind of entertainment I wanted to do. I mean, I’m not Mister Rogers. But I’ve always had a standard.