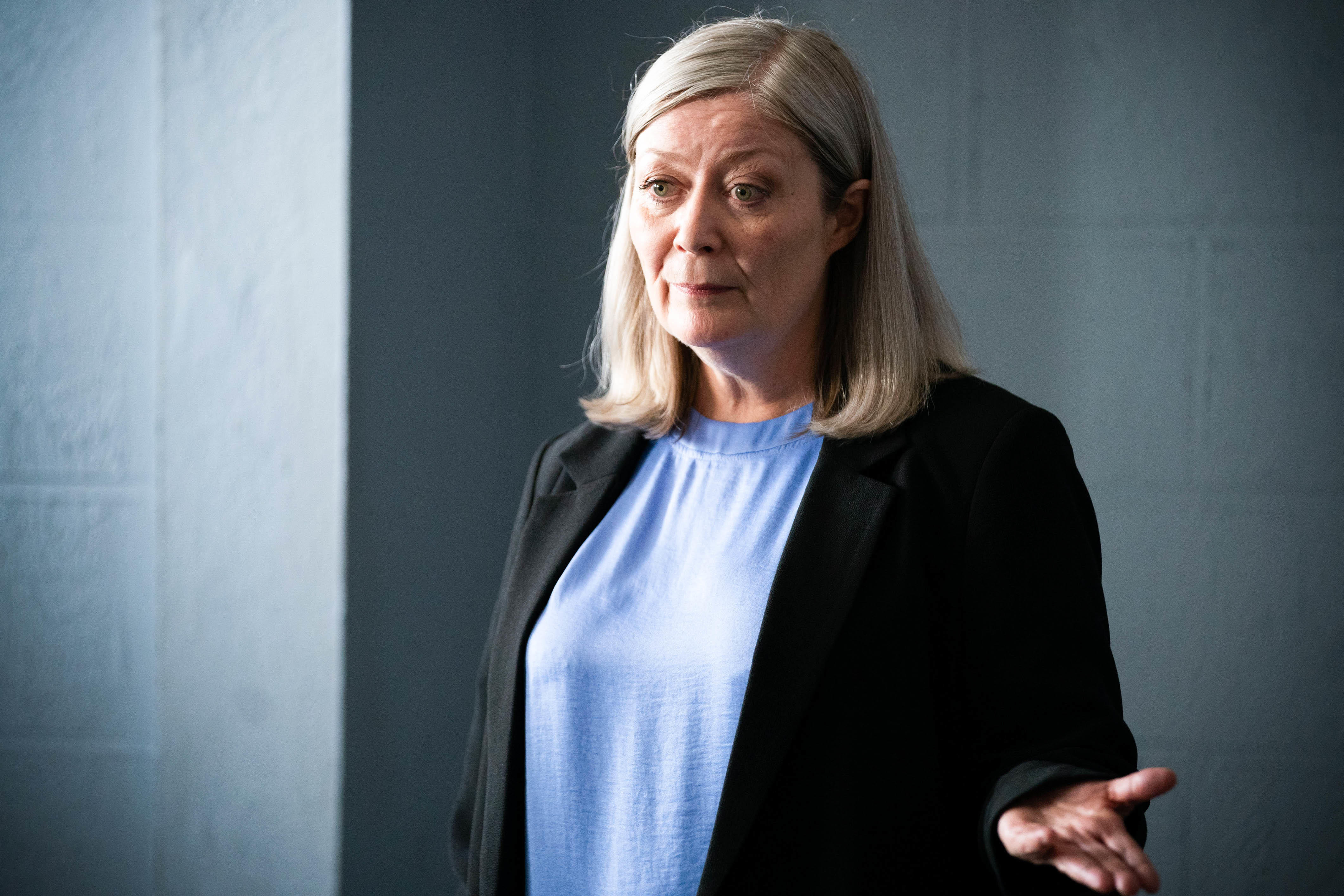 Phil Mitchell (Steve McFadden) has often had a flippant attitude to the police, but he has met his match in the fearsome and vengeful DCI Keeble.

First seen investigating Max Branning’s in 2008, Keeble has flitted in and out of Walford when there are major crimes to pick apart.

Most notably, she was one of the key figures, alongside DC Summerhayes, in the investigation into Lucy Beale’s murder.

Now, the divisive but very entertaining character is back – and, rather than being a supporting act, she has her very own plotline.

With the murder of her father being the central strand of the recent highly acclaimed Mitchell flashback episode, Keeble has recently discovered that Phil’s dad Eric was the killer.

With Billy (Perry Fenwick) being the one to source the weapon, she is going after the next best thing with Eric no longer around – and she is forcing Phil to get involved.

We caught up with Footballer’s Wives and Bad Girls icon Alison Newman, who is also the executive producer of Harlots.

And she absolutely understands her alter ego’s motives, even if she admits that her corruption is edging her down a darker route.

‘I don’t think she’s a villain,’ she mused in an exclusive chat with Metro.co.uk.

‘As you’ve seen this week, she has gone rogue – she was always pretty down the line as a police officer in the past and she hated everyone on Albert Square because of that!

‘But this revelation, it’s not something that she has been sitting on for 40 years, this information about who killed her father, the evidence is very new to her. It’s now her obsession.

‘Her behaviour is a little villainous on paper but the reasons behind it are a bit more complicated; she was just 10 years old when her dad was killed and she has had that her whole life. Now, she has an outlet.

‘She has spent her whole life trying to find out the truth about that night but, now she has, she’s found it’s just not enough. It doesn’t fix it. She’s out for vengeance.’

Alison explains that she was only brought in for eight episodes initially in 2008, but her character was brought back specifically for Lucy’s storyline.

Last year she was called in for Phil’s new strand; and she had no idea where the plot was going to go in terms of exploring Keeble’s origins.

‘I didn’t have a clue!’ she told us. ‘I came back in and it was very much about Keeble turning Phil informant, which I thought was so great in itself.

‘And then it just evolved and developed, and it’s brilliant. Playing a supporting role in a show like EastEnders and to be given a backstory is really flattering, everyone has been lovely about it. I am here to support Steve’s storyline really, I just think it’s been brilliant.’

And it’s just the beginning. Careful not to give away any whoppers of spoilers, she promised us that there are major scenes ahead, with the storyline spiralling into unexpected directions.

‘It’s tricky not to give any spoilers!’ she laughed. ‘It’s a great story that has a lot of twists and turns, there’s a lot to come! It’s going to be quite the ride!’

She is loving every moment and without any hesitation, she declared that she will keep heading back to Albert Square if the call comes through.

‘I really love the show, I really enjoy working on it – yeah, absolutely!

‘As someone who has been popping in and out for 16 years, it’s an amazing place to come back to, it has a lot of heritage and history.

‘I am always treated like an old member of the family who has been on holiday when I come back, it’s so lovely.

‘There’s a real buzz about the place at the moment, I think everyone knows that the show is in good hands and it’s a really exciting time to be there.’

She admitted modestly that her workload is ‘cushy’ – ‘I come in, I do some acting, I go home – and I am usually just working on one storyline.’

And the actress didn’t hesitate in heaping praise on her co-stars, branding them ‘extraordinary’.

‘These guys, I don’t think I’ve ever worked with a harder working bunch of actors,’ Alison enthused.

‘They are juggling so many scripts and storylines, jumping between directors sometimes in one day. Filming is very past paced compared to a single drama – I am awestruck by it. The quality, the humour.’

And the humour is something she particularly attaches herself too, telling us that she and Steve laugh a lot during their scenes – and she also adores some of Keeble’s wry and sometimes dark quips.

‘I think she has a fantastic, if slightly twisted, sense of humour. I get the feeling she’s a loner, probably married to the job. I tend to always play quite strong women, I do love that about her.

‘I think she is pretty fearless as well; with all of the stuff going on at the moment, she is on a mission and very single minded about it – she’s like the Terminator.

‘I kind of love that she doesn’t really care what people think of her, I’d love to take a leaf out of that book.’

Alison has a lot of memories across her time on the show, sharing her excitement at working on the Lucy Beale saga and her enjoyment of working with Anna Acton, who played Summerhayes.

Reflecting on another key moment, she recalled her first scenes with the legendary June Brown, known as one of TV’s most iconic characters Dot Cotton.

‘It was gobsmacking. We had a rehearsal for a scene and Keeble was being really mean to her about Bradley,’ she remembered.

‘And I thought, “yeah she’s really good.” Then the cameraman shouted action, and her response to me pretty much threw me backwards in my chair and I realised, “ah that was you just rehearsing, oh my God you are REALLY good.”

‘She was so kind and generous. That’s my experience on EastEnders, people are always welcoming, it’s such a nice place to go to work.’

Each time she has been in the show, she has been working with different character groups – but one person she has yet to work with is Linda Henry, who she played alongside in ITV prison drama Bad Girls.

Her character Renee had a dangerous feud with Linda’s Yvonne Atkins – which ended in her being murdered by peanut. Only in Larkhall!

‘It’s funny, in all the time I have been there, I have never had a scene with Linda and I would love that too!

‘If that opportunity ever came up, I’d love it. I was in two episodes of Bad Girls and I did it for about five weeks, it was so much fun. And I had an incredibly camp death as well!’

Let’s hope the same fate doesn’t befall Keeble as Phil is currently out for blood. But according to Alison, he shouldn’t underestimate his adversary.

‘She’s in her 50s, she is about to retire, she has nothing really to lose – that’s a dangerous combination!’