No matter the onscreen decade, Elisabeth Moss knows how to suffer in it.

From her star-making role as the chronically underestimated Peggy Olson in the 1960s of “Mad Men” to her current run as Offred in the near-future dystopia of “The Handmaid’s Tale” and an appearance in Jordan Peele’s “Us,” Moss has become a patron saint of the beaten down and abused.

Such bleakness has been consistent in her lesser-seen roles as well, most notably in the work of the New York writer and director Alex Ross Perry. He has cast Moss in three movies, including “Queen of Earth,” from 2015, filming her character’s gradual unraveling in punishing close-ups.

“Her Smell,” the director’s sixth feature, was released on Friday and once again finds Moss — this time as Becky Something, a mid-90s rock star from the world of riot grrrl and grunge — breaking down and rolling around in the wreckage with smeared makeup. The role was created especially for her.

Across five acts, most of them single-scene meltdowns, “Her Smell” traces the descent of a drug-guzzling, self-sabotaging, band-ruining mad genius songwriter who just happens to be a woman.

[“Her Smell” is a Times Critic’s Pick. Read our review.]

With looping tracking shots that capture the sweaty backstage claustrophobia of a rock club, as well as the drain-swirl of addiction, the film was inspired by a diverse group of artists, including Guns N’ Roses, Jawbreaker, Nirvana, Bikini Kill and L7, Perry said. Moss’s list of references added Amy Winehouse, Marilyn Monroe and more. And then there’s Courtney Love, whose look, style and antics as the lead singer of Hole most closely mirror the chaos of Becky and her band, Something She.

Moss, who learned guitar and piano for the part, spoke by phone recently about missing out on punk, her penchant for dark roles and where Love fits into the “Her Smell” universe. These are edited excerpts from the conversation.

What do you remember about riot grrrl and grunge as it was happening?

I was a ballet dancer since I was like 5 years old, and around that time I would’ve been 11 or 12. I was just not on that train. I remember hearing the most popular ones — Nirvana and stuff like that — on the radio. But it seemed like something for older people and definitely cooler people. And I don’t think I really understood it. I was a pretty happy kid. So when I approached this, I was really honest with Alex, like, “This is a whole world that I don’t necessarily understand.”

I know there was a syllabus, as well as an email chain of reference points. Was there anything in particular that grabbed you?

I think for me, watching a lot of old backstage, behind-the-scenes documentaries, just trying to get a feeling for that time. I was looking for something that I could emotionally connect to and feel that anger and that passion. [Agyness Deyn, who co-stars as Moss’s bandmate] was really instrumental in Gayle [Rankin, who rounds out the trio] and I’s journey into the music. She’s so in that scene and knowledgeable, and we were like, I don’t know, “Blink-182, is that a thing?” I would listen to L7 and Bikini Kill, but Elastica was the one that really bridged the divide for me between the most popular and the most authentic.

One conversation that was really helpful was with Beck, who I got on the phone with for about three hours one day. He explained to me where that music came from and why they were so angry and dissatisfied and felt misunderstood.

There’s been some pushback from you all on the Courtney Love connection, but there are a lot of references in the film that point back to her. Did you engage at all with her in your preparations?

It’s almost impossible to avoid because she’s arguably the most famous female musician from that time, and is also, you know, blonde. So visually you’ve got the connection there. And obviously there are some stories that are well-documented that would make sense as far as Becky goes [laughs]. But I said to Alex, “Do we want to make the Courtney Love story? Let’s go talk to her and we’ll make that movie.” But we didn’t want to make that.

That’s the only reason we push back against it — it wasn’t our intention. She wasn’t not a part of it, of course. But I used Kurt Cobain as much as Courtney Love.

Have you heard from Courtney?

No, I haven’t! But I’ve met her a couple of times and she’s always been super cool and nice to me.

Your line delivery in “Her Smell” is this bizarre combination of punk patois, Shakespearean grandeur and manic rambling. Were there real-life reference points for how Becky should sound offstage?

It was all there in the script — the pauses, the weird references. There’s not one word of ad-lib or improv. I did watch a lot of disturbing YouTube videos, like meth heads and things like that. Even sometimes just watching a documentary about Oasis and seeing some of the backstage conversation, that sunk into my head somewhere. 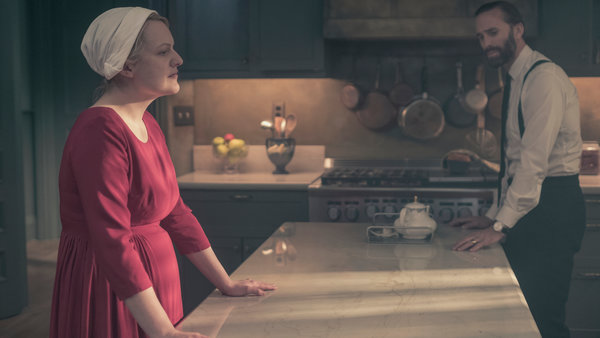 Even with your character Kitty from “Us” or “Top of the Lake,” you’ve become a vehicle for pain and suffering. What keeps drawing you to these brutal roles?

I just find it more interesting and more challenging. I’m a pretty happy person myself. There’s just nothing super interesting or dramatic about watching somebody who’s doing well and doing her laundry, as I’m doing today.

But it has become a little bit of an inside joke among people that I collaborate with: How can they write something that I’m going to be like, “Oh, wow, that’s challenging,” or “Oh, god, that’s dark”? I said to the writers on “Handmaid’s” at the beginning of the season, “Your job is to write something that I’m going to read and be like, [expletive].”

You’ve maintained a career where you can balance some pretty niche art films with the most talked-about shows and blockbusters. Is it fun to have something like “Us” out in the world, where you’re so much a part of the zeitgeist?

It is super fun. That was a different experience for me because I’ve never been in a movie that people knew they were going to go see [laughs]. I’ve never been in something that had an expectation of making money at the box office. That’s the truth. On Monday, people talked to me about it because everyone went to see it that weekend. I’m so grateful for Jordan for asking me to be a part of something historic.

(Spoilers for “Us” follow.) When you saw the movie in theaters, what was it like watching people react to your murder?

I loved it, I thought it was hilarious. When we shot it, Jordan called that scene a 7-second massacre. The crawling on the floor thing, we just knew when we did it that it was going to be cool.

Something “Us” and “Her Smell” have in common is that you get to be funny, even if the other characters in the scenes with you are not amused. Do you feel comfortable in comedic roles?

I never get to do that! No one ever asks me to do that. I definitely have gotten — pigeonholed is a negative word so I don’t want to use it — but definitely gotten this reputation for doing more dramatic material. So it was so fun to do something different. And to play that girl [in “Us”], too — I would like to do a whole movie where I play that girl. I’ve had so many women come up to me and be like, “Oh my god, you got the basic blonde so good.”

Do you think we’re living in a golden age of complicated female characters, or is it just your career?

For sure, I think we are. It’s fantastic. It’s become completely different for me than it was 15 years ago. You have all of these movies that are being headlined by women and some of them, thankfully, made by women. I think people woke up to the fact that there were all these stories that hadn’t been told that were interesting and incredibly entertaining and artistic and also could make a [expletive] of money. The industry woke up to that and the actresses, who were always there and always ready, stepped forward and showed everyone how it’s done.

We’re in a bit of a moment for music films, too. What would you say to a fan of “Bohemian Rhapsody” and “A Star Is Born” — should they see “Her Smell”?

I mean … [laughs] I would say it’s a very different film. In tone, in structure, in character. Very, very different. “Her Smell” can be a tough movie to watch. It’s not as perhaps as easy to swallow. If you want to see the waaaay darker version of “A Star Is Born,” “Her Smell” is going to be right up your alley.

And that’s saying something given that “A Star Is Born” ends in a suicide.