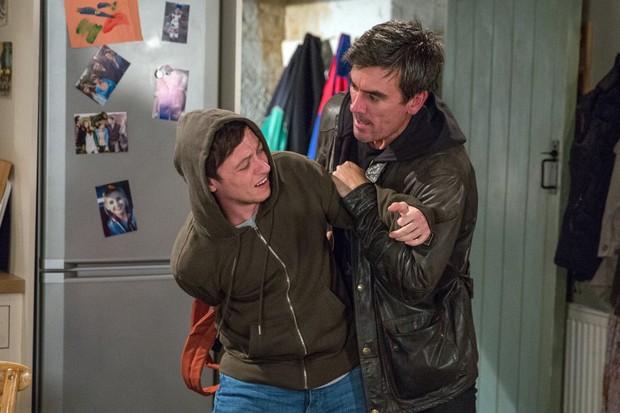 He’s jumped by Isaac and his friends who don’t take kindly to the fact that Hannah is now a man called Matty.

Feeling hurt and humiliated, Matty confides in step-dad Cain Dingle who then accidentally spills Matty’s secret to a horrified Moira and Faith leading to more humiliation for Matty as Moira grills him about the attack.

Later, Victoria Barton encourages Matty to report Isaac and his friends to the police.

He takes her words on board and soon arrives back at Butler’s Farm, telling Cain and Moira that he’s told the police.

Cain is horrified when PC Swirling arrives at the house, fearing he’ll crumble and reveal that he ‘killed’ Joe Tate.

Meanwhile feeling empowered, Matty asks Ellis Grant for some personal training session so he can bulk up and handle himself.

But it’s not long before it becomes clear that Matty is struggling with something – what is it?

Matty arrived back in the village in June and left mum Moira stunned when he revealed he’d transitioned.

He was last seen in 2012 when he was known as Hannah, before leaving to live in London with sister Holly.

But Moira was stunned to discover that Matty had only been a few miles away in Manchester the whole time as he began his new life as a man.