After Gabby (played by Rosie Bentham) returned to Home Farm after her stint in hospital, Kim Tate (Claire King) was the doting grandmother-to-be. She shared advice with Gabby about raising a child on her own and reminded her that whether or not she keeps the baby, is up to her. However, Emmerdale fans think they’ve seen through Kim’s facade, believing she wants to keep Gabby close so she can take custody of the baby once it’s born.

However, as the teen is now pregnant and Jamie is far from interested in her, she has found herself turning to Kim, which is just what the soap villain wants.

Kim wasn’t given much of a look in with granddaughter Millie so she wants to be as involved in Gabby’s child’s life as possible.

She has been on hand to give Gabby a place to stay when she didn’t want to stay with Laurel Thomas (Charlotte Bellamy) and needed help at the hospital. 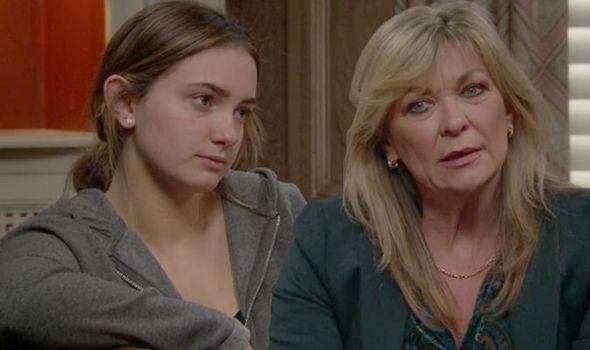 Now, after Laurel suggested Gabby hand over her baby for her to raise with Jai Sharma (Chris Bisson), Kim has stepped in to remind the teen it’s her decision regarding how she wants to proceed with her pregnancy.

In Wednesday night’s episode, she persuaded Gabby she was the only one on her side with the teen pushing Laurel further away.

“Have you given any thought to her offer?” Kim asked.

Gabby replied: “Honestly, I haven’t thought of much else,” as Kim enquired: “So you are considering it?”

The teen admitted she wasn’t sure, explaining: “In some ways, Laurel’s offer of taking on all responsibility is tempting although a bit weird. 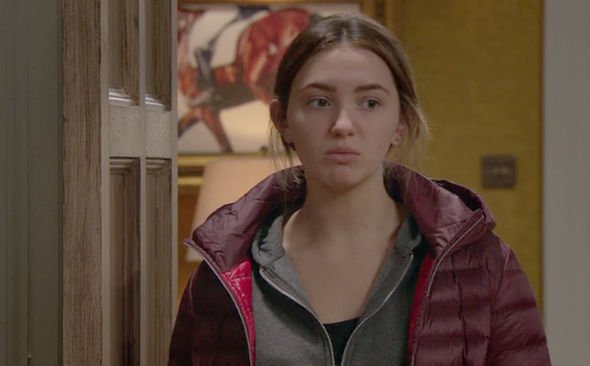 “But with you, Jamie and Laurel all arguing, I just don’t know what’s best. My head is just mush.”

“Well, of course it is,” Kim assured her. “But you must remember, through all of this, it’s your decision.

“All the options are very much on the table. In the end, it’s no one else’s business what you decide, including mine and Laurel’s.

“Take your time, it’s your decision.”

Later Gabby told Kim she felt like “my whole life is over” with the matriarch noting it was because she was only 19. 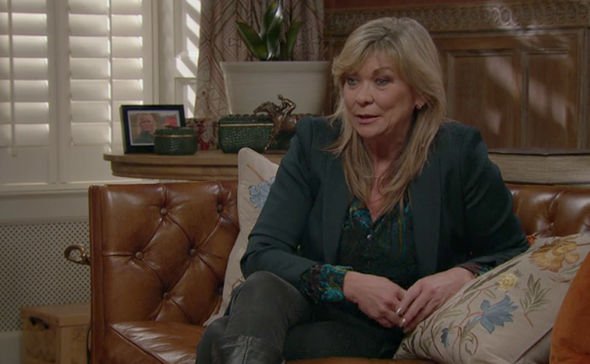 Recalling her own experience as a young mum, Kim continued: “I’ll be honest, having a kid is hard, especially in the first year.

“You don’t even know what planet you’re on but… it passes and you get used to things. You might even grow to love it. The experience, not the baby. Well, that too.”

As Gabby admitted she thinks she’s in love with Jamie, Kim pushed that idea out of her mind, explaining: “You don’t need a man to raise a child.”

She insisted Gabby “would get past” her crush on Jamie, hinting that without his support, it would be easier for her to take the tot from Gabby.

Fans are now certain Kim has plans to keep Gabby close she can monitor her behaviour so if she does keep the baby, once it’s born she can get custody.

By keeping Gabby close, she can gain as much damning evidence against her as possible, which will make the process of getting custody of the tot easier.

Emmerdale viewers have been quick to call out Kim’s behaviour, with many questioning how Gabby cannot see how she is being manipulated.

“If Gabby can’t see what Kim is up to she really is thick #Emmerdale,” one viewer posted on Twitter.

Another added: “#Emmerdale if gobby Gabby can’t see what Kim is really up to she actually is stupid.”

“Listen to Kim pretending to be the caring grandmother. Kim Tate is a conniving old trout that always has an agenda. Kim Tate is not to be trusted #Emmerdale,” a third warned.

Someone else continued: “What Gabby fails to realise is that Kim is pulling all the punches. She has more than a lot to learn…it will not end happily though, I fear #Emmerdale.”

A fifth added: “Tbh i think Kim is manipulating Gabby, she’s supporting her giving her advice but once the baby comes i bet Kim will use everything against Gabby to try & get custody of the baby #Emmerdale.”