Hulu’s divorce dramedy Fleishman Is in Trouble wrapped up its eight-episode run with its characters reacting in very different ways to the terrifying onset of middle age — but it also ended with a slight glimmer of hope.

Thursday’s finale picks up with Libby knocking on Toby’s door late at night to tell him all about Rachel’s insomniac ordeal. But Toby’s only reaction is: “So that’s it?” He’s utterly unaffected, even callous, when Libby tells him Rachel had a nervous breakdown, concluding, “She’s not my problem.” The next day at work, though, Toby comforts the grieving husband of his dying patient and listens dutifully to Solly practicing his STEM presentation, so he’s not a total jerk. Like Libby’s narration reminds us, he can be both things at once. He also supports Hannah when she freaks out and ditches her bat mitzvah study, taking her and Solly back to the natural history museum to see the Vantablack exhibit again, facing the void together as a family. 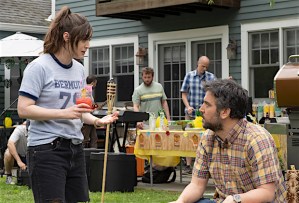 But enough about the Fleishmans: Libby takes over the bulk of the finale, wallowing in her ever-worsening midlife crisis. After she bumps into a friend who’s glowing after getting divorced and dating her boyfriend from college again — when the friend says, “I feel like I’m me again,” we can see how badly Libby wants to feel that way herself — Libby looks up her old boyfriend Larry Feldman on Facebook and sends him a friend request. She’s excited when Larry accepts her request and starts chatting with her… and then she’s disgusted when his messages quickly turn X-rated. Some things are better left in the past, it seems.

Things with Libby and Adam are rocky after her disappearing act: When she tries to make amends by making pancakes, he rushes the kids out the door without eating, and then she discovers he took the kids to a barbecue she didn’t even know about. They end up in a big fight where he takes her to task for being so moody and difficult lately. When she pleads, “I feel like I’m not alive anymore,” he reminds her, “You chose this!” He even accuses her of sleeping with Toby, which only draws a laugh from her. But when he says, “I expect you to come home at night. Is that so crazy?” we have to admit he’s not being unreasonable. (She also learns that her once-beloved writing inspiration Archer Sylvan has died, underlining the cruel passage of time.) Seth invites her to a mysterious party in the city, and Adam can barely hide his disdain when he tells her to go and have a good time. 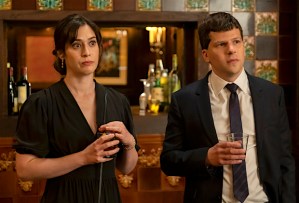 The party is a swanky affair, and as Toby greets Libby at the bar, they both realize to their horror that Seth is about to propose to his girlfriend. And indeed he does, although it’s a surprisingly sweet proposal, with Seth admitting he’s given up on trying to make sense of the world: “It’s all a lot simpler than I thought it would be: I just want to wake up every day and see your face.” Toby and Libby congratulate him, even though their marriages are in various states of shambles. They talk about Archer’s death, and Toby points out he died alone: “We’re lucky we have people.” Libby still doesn’t know what she’s doing with her life, but Toby tells her she’s already done it. She’s loved. That’s not enough for Libby, though. She thinks she might write a book — about all of this, actually. She’ll tell all the sides of the story except just one. This story doesn’t have an ending, though, Toby says. So Libby imagines a scene where Toby comes home in a rainstorm and hears a key in the lock and it’s Rachel, and that’s the end of the book.

Toby and Libby bury the hatchet — he tells her he can still see in her who she was when they first met — while Seth dances with his new fiancée. Libby steps outside for a cigarette, but then impulsively ditches it and gets into a cab, heading back home to New Jersey. On the ride home, she muses about marriage and unhappiness and lost youth as we see a montage of her life’s biggest moments. Once she’s home, she climbs into bed with Adam, apologizing for being late. His reply: “It’s OK. You always come back.” And Toby walks home in a sudden rainstorm, sending the babysitter home and getting out of his wet clothes — when he hears a key in the lock. He turns and sees Rachel… and that’s the end of the series.

Alright, it’s your turn: Grade the Fleishman finale, and the series as a whole, in our polls, and then hit the comments to share your post-finale observations.