WARNING: THIS STORY CONTAINS MAJOR SPOILERS FOR THE FINAL EPISODE OF GAME OF THRONES.

After all the bloodshed, butchery and burning, Game of Thrones ended not with bang but with a ballot. Democracy trounced dragons.

For 72 episodes spread over eight seasons, the world's biggest television drama had been driven by one central question: who would sit on the Iron Throne? Would it be Daenerys Targaryen, the mother of dragons, who believed it was her destiny not only to rule the Seven Kingdoms but to "break the wheel" of tyranny that had kept the ordinary people repressed for, well, forever? 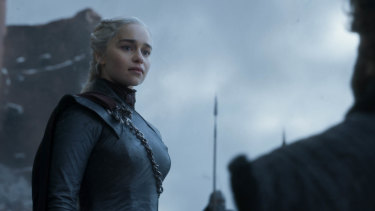 With King’s Landing in ruins, Daenerys was finally ready to get her hands on the Iron Throne.Credit:HBO

It was the ultimate triumph of politics over force, of the will of the people (a council comprising 13 of them, at least) over contested bloodlines.

Dany was murdered by her lover/nephew/loyal subject Jon, because he believed that was the only way to prevent further carnage. Her dragon had flown off to who knows where, but only after turning his fiery breath on the Iron Throne in rage at his mistress's fate, melting it to a pool of molten metal. All that bloodshed, and for what?

The council of representatives of what remained of the so-called Great Houses of Westeros convened in the giant dragon pit of what remained of King's Landing to decide the fate of Jon Snow, now a prisoner, and Tyrion, accused of treason for inciting this murder.

Some wanted Jon executed, but Arya threatened to slit their throats. 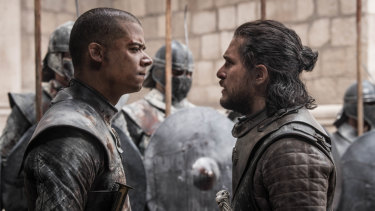 Grey Worm and Jon Snow did not see eye to eye on the appropriate use of military force.Credit:HBO

The council was hamstrung because there was no ruler. So choose one, urged Tyrion.

"Why just us," wondered Samwell Tarly. "Maybe the decision about what's best for everyone should be left to, well, everyone."

The idea of full suffrage, though, was a conceptual leap too far. "Maybe we should give the dogs a vote as well," said one of the wise men. "I'll ask my horse," guffawed another, seemingly referencing some of the more hysterical material from the No side of the 2017 same-sex plebiscite.

In the end, Tyrion proposed Brandon Stark, in a wheelchair since being pushed out of a window by Jaime Lannister in the very first episode, but rewarded for his pains with a range of paranormal abilities that made him wise and dispassionate, if somewhat lacking in empathy. A vote followed, and Bran the Broken was the elected ruler of the Six Kingdoms (Sansa opted to keep the North aligned but free). The fact he is unable to sire children who might inherit the throne only made the choice more perfect. 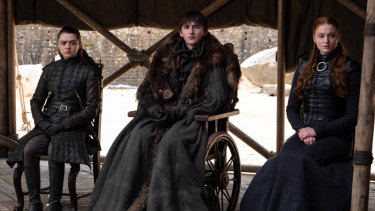 There will of course be many among the show's latterly disaffected fans who protest at this turn of events. There will be those who claim it is a betrayal of the literal cut and thrust of the series, and of the narrative and the world created by George R.R. Martin. But it absolutely makes sense.

Politics has always been at the heart of Game of Thrones. Mostly it has played out as war by other means, an expression of ruthless personal ambition. But the characters who have commanded most sympathy are those who have sought an end beyond themselves. Dany's crusade of liberation, until it became just another form of oppression; Jon's self-sacrifice so that all might live free; Tyrion's gradual realisation that public service was an even greater calling than the bottle or the brothel.

None exemplified this notion of a public mission played out through political game playing more than Varys. The eunuch and one-time master of whisperers appeared for so long to represent nothing so much as the self-interest of the political elite.

Like Petyr Baelish, he appeared to be a master manipulator willing to switch sides and principles in a moment in order to further his own career and interests. He was, perhaps, the personification of everything disaffected voters in the Western democracies have come to feel about their representatives and their enablers. 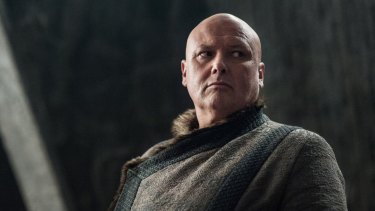 Varys finally emerged as the unlikeliest of heroes.Credit:HBO

But in the fourth episode of the final season, Varys finally revealed his true ambitions, and they were genuinely shocking: he wanted real democracy.

No matter which ruler he had served he always remained loyal to The Realm, he told Tyrion. By that he meant "the millions of people, many of whom will die if the wrong person sits on that throne. We don't know their names but they're just as real as you and I. They deserve to live, they deserve food for their children. I will act in their interest no matter the personal cost."

It was the purest expression yet of the show's underlying impulse.

Ultimately, Varys paid the highest price of all – his life. But in sowing the seed of that ideal in the mind of Tyrion, who then sowed it in the collective mind of the council, who then opted finally to "break the wheel" of inherited power in favour of something at least partway along the road to democracy, he got his wish. 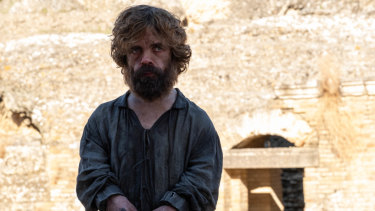 From debauched prince to the wisest of counsels, Tyrion’s journey has mirrored that of the show as a whole.Credit:HBO

In dramatic terms, it may have resolved itself with something like indecent haste. But thematically, it made perfect sense.

Warfare and bloodshed may have provided many of the thrills across the 73 episodes of Game of Thrones, but there was never any real doubt that politics would win in the end.