Arya (played by Maisie Williams) has already had her big moment on Game of Thrones this season, as she killed the Night King (Vladimir Furdik) in episode three of the final series.

Many thought Jon Snow (Kit Harington) would fulfil the honour of stabbing the evil undead zombie, but warrior Arya swooped in at the final moment and shattered the Night King into millions of pieces.

The HBO series’ fourth instalment saw an exhausted Arya make plans for her future, turning down her lover Gendry Baratheon’s (Joe Demise) proposal and riding off across Westeros with the Hound (Rory McCann) in tow.

But the latest episode saw Arya’s rage and vengeful nature return when she realised Daenerys Targaryen (Emilia Clarke) had turned into the Mad Queen and rained dragon fire across the whole of Kings Landing.

Innocent lives were lost, but following the heartbreaking deaths of the mother of dragons’ closest friend Missandei (Nathalie Emmanuel) and Rhaegal, Daenerys began her tirade against Cersei Lannister (Lena Headey) without a care in the world.

It was later revealed Cersei and her brother Jaime Lannister (Nicolaj Coster-Waldau) died together in the blaze at the Red Keep, but Arya’s realisation seemed to give her the fire she needed to go after Daenerys and destroy her once and for all.

A mystical white horse then appeared to Arya, and viewers were left scratching their heads whether the creature embodied a prophecy or was a family member returning from beyond the grave.

Taking to Reddit to share their theory over the animal being a signal to bring about Arya’s death in the series, fan Zakificus shared the biblical resemblance: “I looked, and there before me was a pale horse!

“Its rider was named Death, and Hades was following close behind him.”

Another fan speculated: “Seeing that white horse really had me anxious for a moment because it can be an omen for death…however maybe it’s symbolism that death rides a pale horse #gameofthrones.” 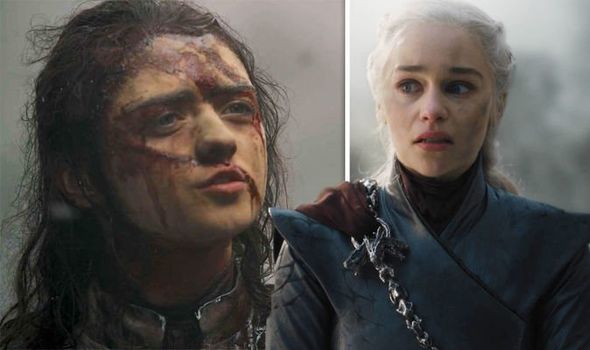 Its rider was named Death, and Hades was following close behind him

“The white horse showing up to help Arya also happened to be a toy of the girl she tried to save. #Whitehorse #GameofThrones,” a third noted.

One user, called mandabearhugz, compared the scene to that of Khal Drogo (Jason Momoa) and Daenerys in season one.

“This was my favorite scene tonight,” they said. “Remember when Drogo gave Daenerys a white horse back when she too was pure of heart? Nice touch.”

PRSeventeen commented: “The woman and her little girl whom Arya tried to get off the street before they got hit with dragon fire were often focused in scenes leading up to this shot. 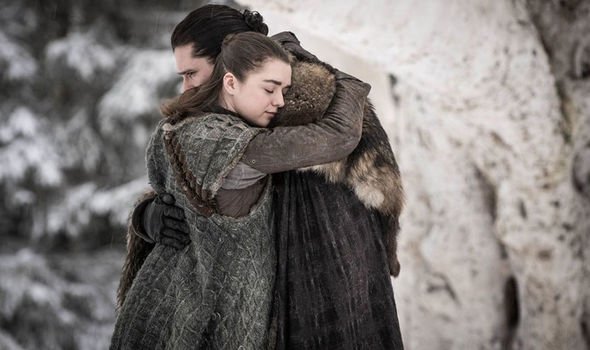 “And in each of those shots the little girl was holding a toy white horse, purposefully where it would be in the shot. She died, and the horse appeared just after the shot of her remains.”

IceRaven7 suspected Arya was being visited by her late father Ned Stark (Sean Bean), who was beheaded by King Joffrey Lannister (Jack Gleeson) in the season finale of season one.

“This horse reminded me of Ned Stark for some reason…” they said simply.

Will Arya go out in a blaze of glory murdering Daenerys in the season finale? or will Jon end up doing the deed?

Game of Thrones season eight concludes Sunday on HBO and is simulcast on Sky Atlantic at 2am in the UK.