Maintaining its tradition for delivering bonkers opening episodes, The Good Fight kicked off Season 5 on Thursday (in its new Paramount+ home) with a change-of-pace installment that basically crammed a year’s worth of story into one hour.

To be fair, series creators Robert and Michelle King entered Year 5 with a formidable to-do list that included tying up loose ends from an abbreviated-by-COVID fourth season, writing out original cast members Cush Jumbo (Lucca) and Delroy Lindo (Adrian), and acknowledging the game-changing events of the past 15 months (the aforementioned pandemic, the murder of George Floyd, President Trump’s ugly White House exit, etc.).

Below, the Kings answer our burning questions about the aptly-titled season premiere, “Previously On… “

TVLINE | How much of this episode was filled with material from the scrapped final three episodes of Season 4?
ROBERT KING | The first draft [of the script] we pulled a lot from those [lost episodes]. But then we kept writing drafts and we used less and less. We instead decided to imitate the feel of recapping. So we [imagined] if we had shot six to eight new episodes throughout 2020, what would it be like to [quickly] recap them?
MICHELLE KING | It’s all fresh material.
ROBERT KING | We were going to do more with Memo 618 with regard to the chief justice who lies about Julius Cain — and we had footage of it — but it [ultimately] took us in all of these directions that weren’t necessary.

TVLINE | You managed to give Lucca and Adrian very satisfying exits in the premiere, which was surprising given you only had one episode to do it in. Did you have to pivot too much from the original Season 4 departure storylines you had planned for them?
ROBERT KING | Lucca’s [exit] was always going to involve Bianca, but it was [originally] going to be Bianca pulling Lucca and her son to St. Lucia to establish this resort. And Lucca’s [final scene] was going to be her on a beach standing in a foot of water with her son beside her and alone. It was beautiful but also sad, because she was missing her friends. And then Adrian, he was going to run for president in 2024 so that the democratic party would have an African-American face on the debate stage. And that was going to be a little sad, too, because there’d be a sense that he was there as a token. 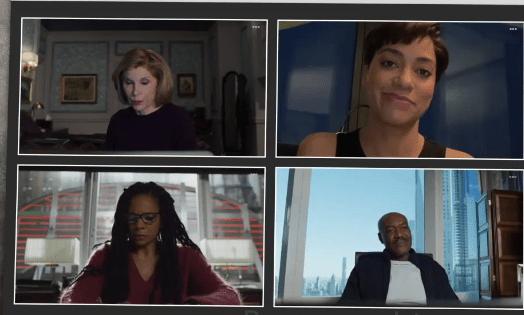 TVLINE | Cush relocated to London during the pandemic, and I love how you tailored Lucca’s exit storyline accordingly. I’m guessing it was bittersweet for her, considering all of her goodbye scenes were shot virtually and, I’m assuming, separate from her co-stars?
MICHELLE KING | There is one other actor [on set] with her — Lucca’s son Joseph, who was played in that split-second scene by Cush’s actual son, [Maximillian]. That’s not the same [child] actor who played Joseph as a baby.
ROBERT KING | This is a testament to Cush Jumbo as an actress: She did not have any live face time [with her co-stars]. When you watch the dailies you hear this English script supervisor off screen reading the other parts.

TVLINE | You also concluded the Memo 618 mystery, but, I have to be honest, I’m still not clear on who was ultimately behind the whole thing. Help a dummy out.
ROBERT KING | We were suggesting that it was a tradition that came out of the office of legal counsel and that every generation has it’s own Memo 618, but under Trump it went to an extreme level. But it will always be there and it will always continue to bubble up. So I don’t think we’ve seen the last of it on our show.

TVLINE | I was surprised Diane hadn’t dumped Kurt. I would’ve thought his continued support of Trump, through the election lies and the insurrection, would’ve finally been a deal-breaker for Diane.
MICHELLE KING | These two people respect each other so much and love each other so much that it isn’t going to destroy them. Diane is not going to give up her ideals; she is going to keep fighting for the things that she believes in. But she’s not going to let Trump destroy her marriage the same way he destroyed the country.
ROBERT KING | I don’t want to [spoil] where the season is going, but it’s not as pretty a picture with them as it has been in [past seasons]. We’ve all been pushed to some kind of danger point [with Trump].

TVLINE | A COVID-stricken Jay hallucinating a version of Frederick Douglass — played by Ben Vereen — from a 1970s Soul Train commercial for Afro Sheen  was wildly, hilariously specific. Who thought of that?
ROBERT KING | [Laughing]
MICHELLE KING | That came from the demented mind of [Good Fight executive story editor] Aurin Squire, who is just terrific.
ROBERT KING | I didn’t believe [the commercial] existed. [Laughs] I had to go on YouTube to watch it. I thought [Aurin] made it up. It is very funny. But it also felt [grounded], because when you are that sick there are [random] things that flow through your mind. And it felt like a good way for Jay to have a conversation about Black Lives Matter.

TVLINE | Was it important for you to show a major character like Jay nearly dying from COVID?
MICHELLE KING | It just made sense in terms of the numbers. Statistically, it was likely [that one of our characters would get sick].