Gloria Delgado-Pritchett is nowhere to be found in a new photo from Sofia Vergara‘s next TV project.

Netflix has released a first look at Griselda, its upcoming limited series that will star the Modern Family actress as real-life Colombian drug queenpin Griselda Blanco.

“Despite being known for her ruthless and violent ways of doing business, Griselda Blanco was one of the world’s wealthiest drug traffickers who enjoyed a lavish and glamorous lifestyle,” the project’s description reads. Across six 50-minute episodes, the series will chronicle how Blanco’s “lethal blend of charm and unsuspected savagery” helped her build one of the most profitable cartels in history and ultimately earned her the nickname “The Godmother.”

Vergara will also executive-produce the drama alongside Eric Newman and Andrés Baiz, the latter of whom will direct all six episodes. Ingrid Escajeda (Justified) and Narcos co-creator Doug Miro serve as co-showrunners.

See the full image of Vergara in character below, then drop a comment with your initial reactions! 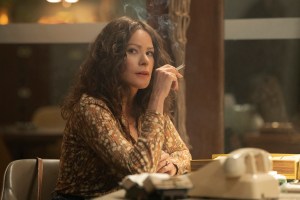