If you are of a certain age, you might think you know what happened at the Chernobyl power plant back in the ’80s, but you probably don’t know the half of it.

On April 26, 1986, technicians forced to conduct a test late at night armed with an incomplete understanding of how their reactor even worked caused the fourth reactor inside Chernobyl to explode.

Hundreds of workers and local firefighters fought a blaze amidst lethally radioactive graphite chunks strewn about them. This fire burned for 10 days and sent a plume of intense radiation across Eastern Europe and around the world in the worst-ever civil nuclear disaster.

The Soviets evacuated 120,000 people from the area, including 43,000 from the city of Pripyat where Chernobyl was located.

HBO presents the premiere of showrunner and writer Craig Mazan’s five-part series Chernobyl on Monday — the story of terrible decisions born from shortcuts, cost-cutting, hubris and lack of planning on a scale that was and is still criminal on every count.

This is made possible thanks to the brutally honest memoirs of lead scientist Valery Legasov, who was brought in to stop the core meltdown and contain the fallout and wound up killing himself at the age of 51.

In Mazan’s story, we open with a visibly distressed Legasov (Jared Harris) hiding his notes and accounts of what happened at Chernobyl while dodging the watchful eyes of the KGB.

His journalling of events made it into the right hands, and history and time reveal the Soviets were criminally negligent in the handling and running of this lethal power plant.

Chernobyl is many things; it is a dramatic retelling of an actual disaster, yet it revels in the well-crafted tension of a classic horror film, and it has courtroom and spy thriller elements that percolate this story at a pace that will enthrall.

For this review, we binged the five episodes in one sitting. It’s that good.

But make no mistake, this HBO drama belies the absolute terror and carnage the event wreaked on millions of lives across the European continent, specifically in the path of the wind currents that took highly radioactive material airborne.

There are places within Ukraine you will never be able to see, long abandoned.

There are many villains in Chernobyl to point fingers and accuse of wrongdoing — especially the KGB, the omnipotent security agency for the Soviet Union from 1954 until its collapse in 1991.

Through Legasov’s notes, we learn he discovered the KGB redacted two pages of key Intel the fated plant technicians did not have to understand their predicament and the reactor’s lethal design flaw.

Even more chilling is the realization this was exactly the time period when Vladimir Putin served in the KGB.

At the Television Critics’ Association, Mazan said Chernobyl “was the product of intentionally terrible decisions designed to protect a system that was inherently corrupt and inhumane.”

Yet despite the calamitous outcome, he praised the people of Ukraine and of Legasov’s bravery and added: “…It was also the result of individual humans doing the things that individual humans often do. What I found so oddly beautiful about the stories that I read was that in response to what I would consider to be the worst of human behavior, we saw the best of human behavior. Only humans could have made Chernobyl happen, only humans could have solved the problem of Chernobyl. The nobility, the quiet nobility of hundreds of thousands of people, names of whom we will not know, is remarkable.”

This is a hard-to-watch but deeply important miniseries in times where the pressure to disband regulations and gut the EPA (Environmental Protection Agency) are at an all-time crescendo in the USA.

Incidentally and thanks to our more stringent regulatory agencies, the nuclear power industry in the west operates under a set of strict regulations.

In the USA, nuclear reactors are built inside containment buildings. The USA had the Three Mile Island partial meltdown, yet almost no radiation escaped into the atmosphere.

Chernobyl in the cash-strapped Soviet Union had no building around it (or any of their Soviet reactors). We learn by watching Chernobyl that they were designed to deliver massive amounts of power at the lowest cost. They also had no safety nets for the worse case scenario.

Kudos to Craig Mazin and director Johan Renck who artfully recaptured history in a period piece that extends from April 1986 to roughly 1988.

They weaved personal stories, all deftly stitched together, and were well served by a crack team of below-the-line craftspeople whose special effects, makeup, and set design excelled at every level.

You can see their production carefully researched the physical effects of radiation exposure at different degrees of contamination.

Also, the top-level production design is on display, which includes set decoration of authentically dressed Soviet offices and homes. It is not easy to pull off these visually important details yet they do it exceptionally.

Who is in Chernobyl?

The story of Valery Legasov is perfectly retold through the enormous talent of Jared Harris whose affinity for the tortured soul was brilliantly on display in AMC’s The Terror as well as Mad Men, where he played the fated British ad man who ended it all at the office.

Harris has the right amount of restraint and fury at the perfect moments and no one could have filled out this role any better. He should be included on the shortlists for critics at awards time for his portrayal of Legasov. 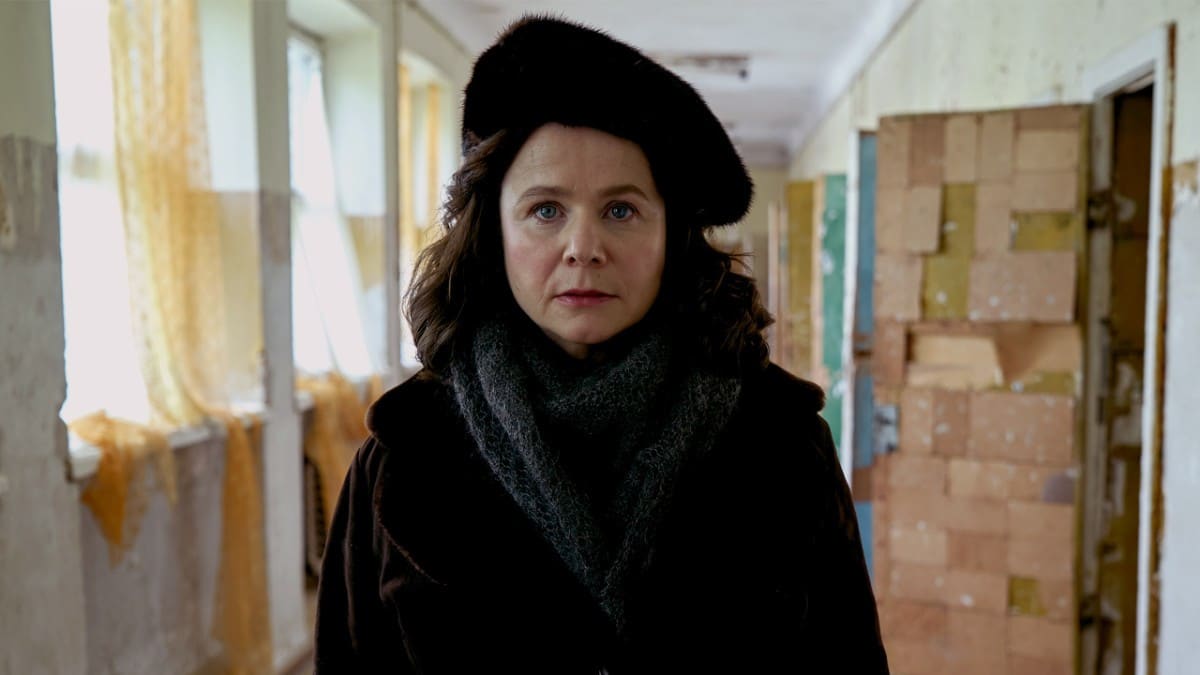 The story revolves around Legaslov (Harris), a foe-turned-ally in Soviet Deputy Prime Minister Boris Shcherbina (Stellan Skarsgard), and a fearless composite character (in honor of Legaslov’s team who worked with him) who is described as the “whistleblower nuclear physicist” named Ulana Khomyuk (Emily Watson).

The secondary story is of Lyudmilla Ignatenko (Jessie Buckley) the pregnant wife of fated firefighter (Adam Nagatis) who was a first responder walking among the lethal graphite debris field. His physical deterioration his hard to watch.

Watch for great performances also from a world-weary group of Soviet coal miners, of whom British actor James Kermack is part of, their collective scenes of resignation and sacrifice gold in this gripping effort.