Hellboy may not be the most famous comic book hero in the world, but he’s certainly well loved — a status that has earned him his very own cinematic reboot by director Neil Marshall, a little over a decade after Guillermo del Toro’s cult classic duology. Unfortunately, the return of Big Red to the silver screen is anything but a welcome one or a worthy successor to the original films.

A complete and total reboot of the franchise, Hellboy tries to make an entirely new cast work with Stranger Things’ David Harbour taking over the title role from originator Ron Perlman and Ian McShane bringing a new version of Professor Broom to life in John Hurt’s stead. That’s really the first mistake. Harbour and McShane lack any sort of real chemistry with one another, which repeatedly fumbles the father-and-son dynamic that is supposed to carry both Broom and Hellboy through their respective arcs. McShane spends the bulk of his screen time providing info dump exposition while Harbour rolls his eyes as best he can under pounds and pounds of makeup — which, maybe, could have worked if we were given any indication that their relationship had ever been anything but rocky.

McShane’s take on Professor Broom, specifically, feels both wooden and non sequitur. This version of the BPRD — the Bureau for Paranormal Research and Defense, the Hellboy world’s version of the X-Files — is less keen on researching or defending and more excited to act as a sort of paramilitary kill squad. This Broom fits into that niche as not a kindhearted researcher who adopted a demonic baby as his son but as a gun-toting killer who let a creature he was supposed to kill survive and later call him “dad.”

This probably wouldn’t be too big a problem if Harbour’s Hellboy weren’t so completely reliant on his daddy issues to have some semblance of a character arc. Or, maybe he’s supposed to be focused on his angst about being an inhuman creature forced to hunt down other inhuman creatures to save humans? The movie never really makes up its mind, tries to hedge its bets between the two, and comes up short on both.

Even if you’re somehow able to completely remove any nostalgia for Perlman and Hurt from the equation, you’d still be left with two horribly two dimensional heroes who are annoying at best and downright unlikable at worst.

The rest of the ensemble — Daniel Dae Kim as Ben Daimio, Sasha Lane as Alice Monaghan, and Milla Jovovich as Nimue the Blood Queen — are characters with no live-action history, but all sadly feel like afterthoughts to the Harbour and McShane family drama hour. Kim’s Daimio specifically feels like he may have been interesting, in a different movie, but instead what we get are scraps of a tragic military past and no real motivation. Jovovich for her part embraces the full on horror-camp of her character, a medieval witch who wants to wipe out humanity, but campiness can only take a villain so far. 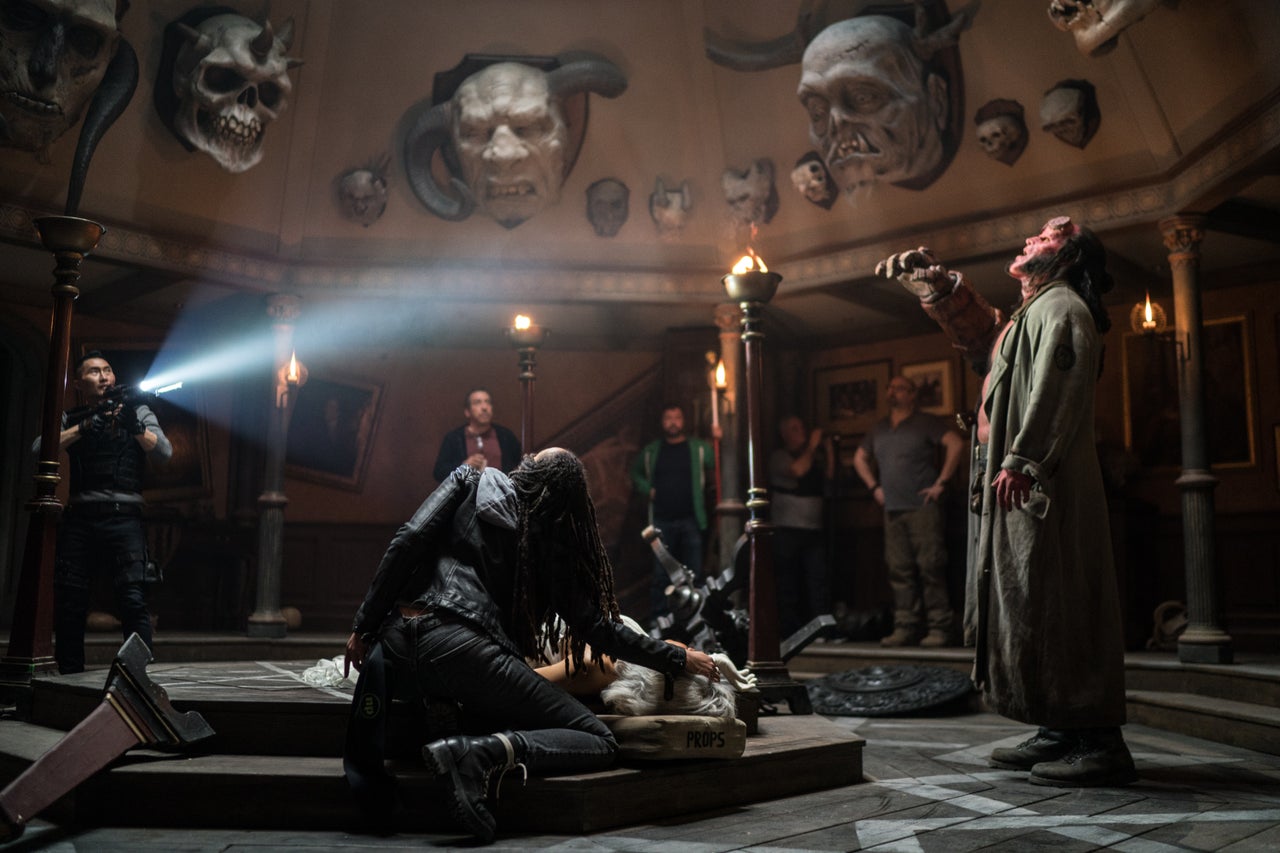 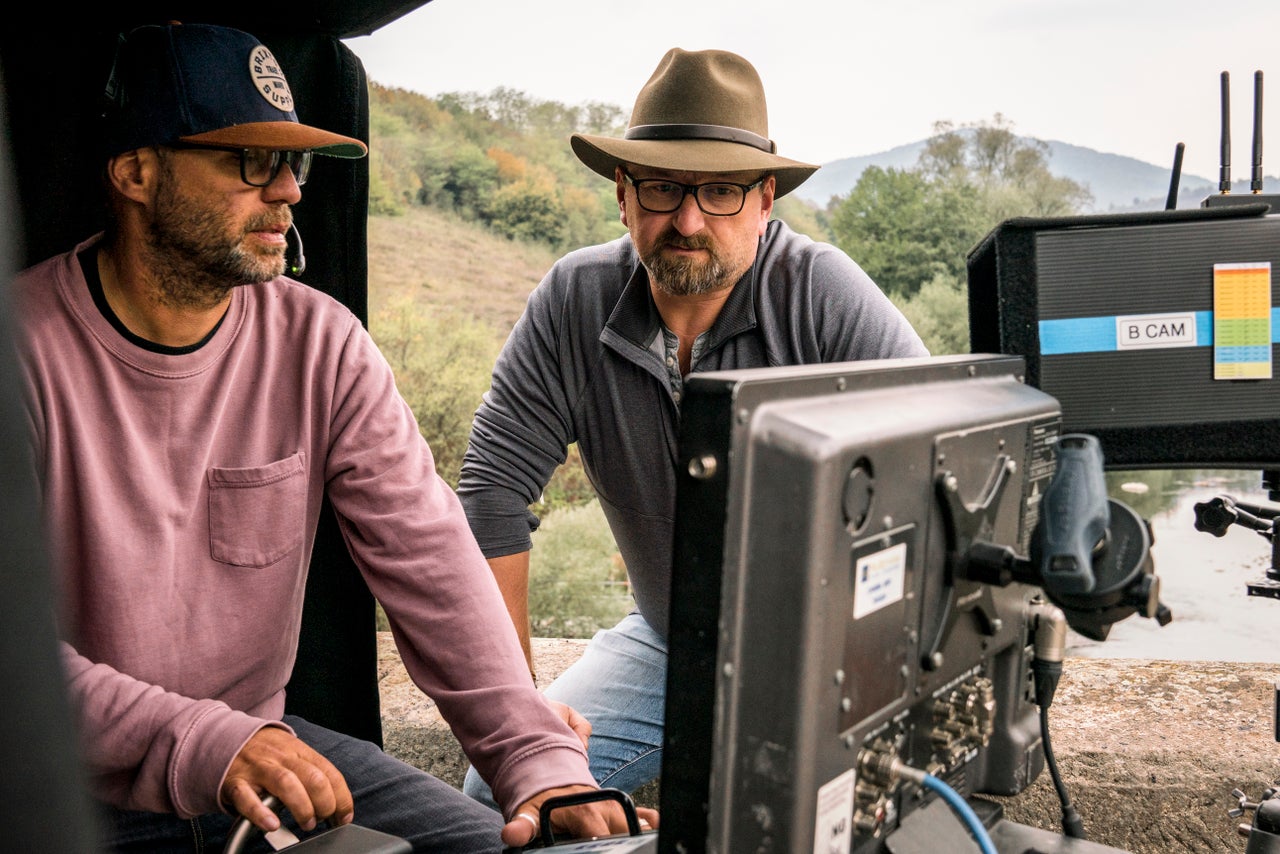 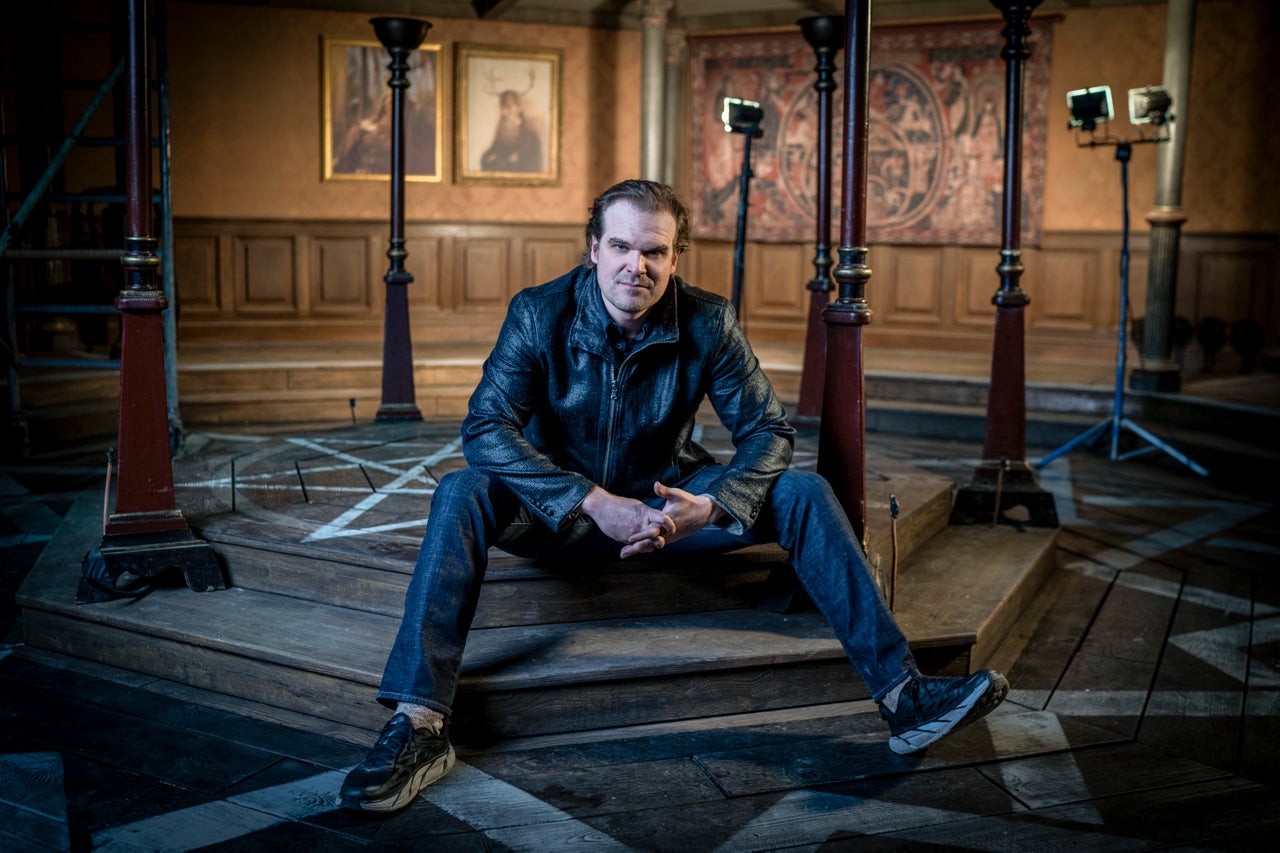 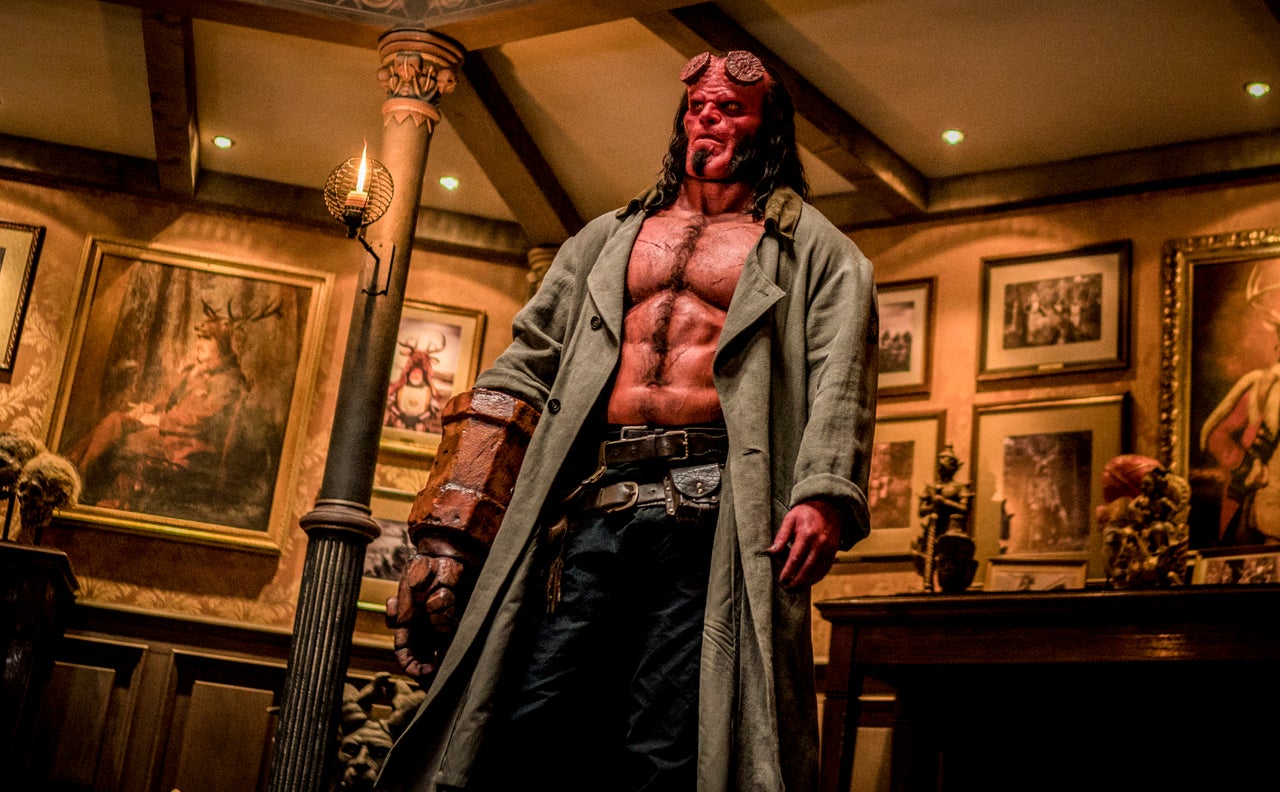 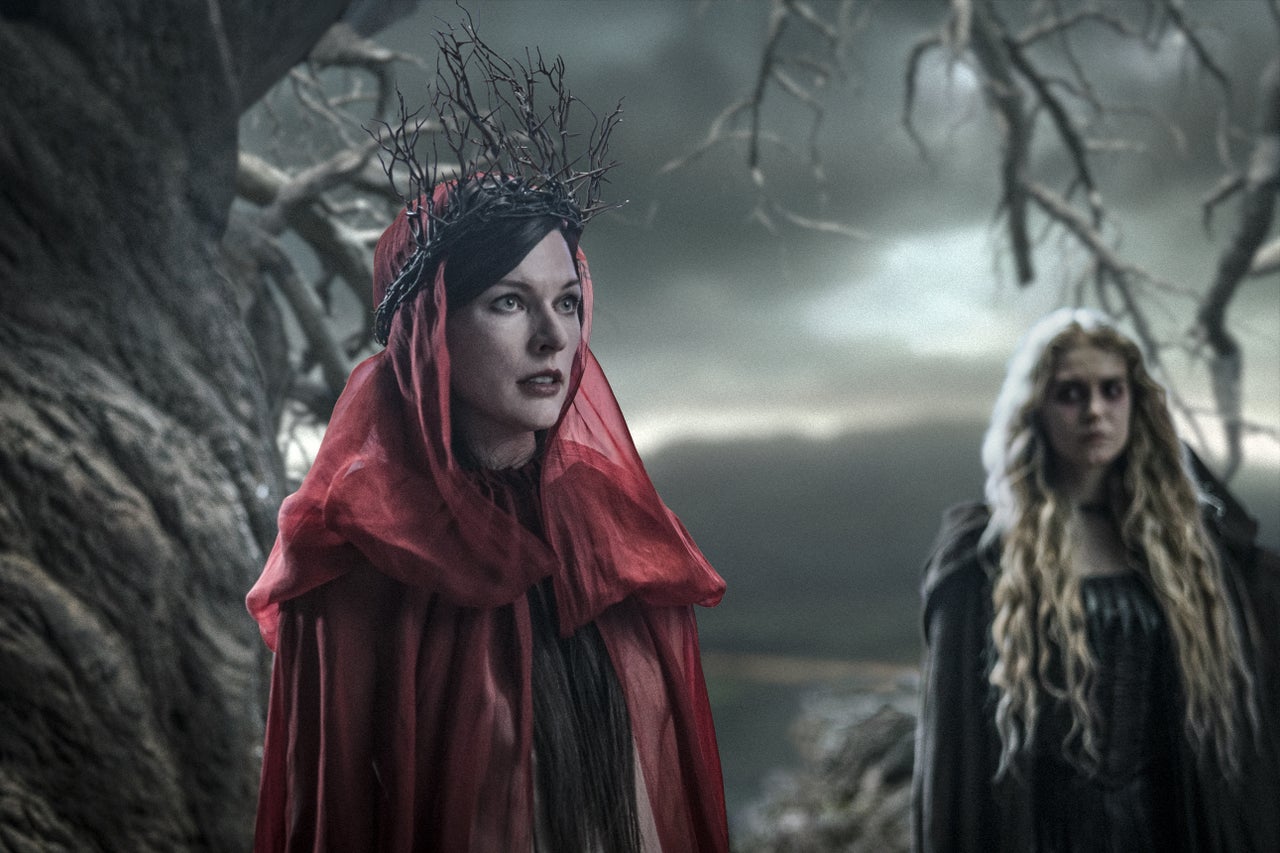 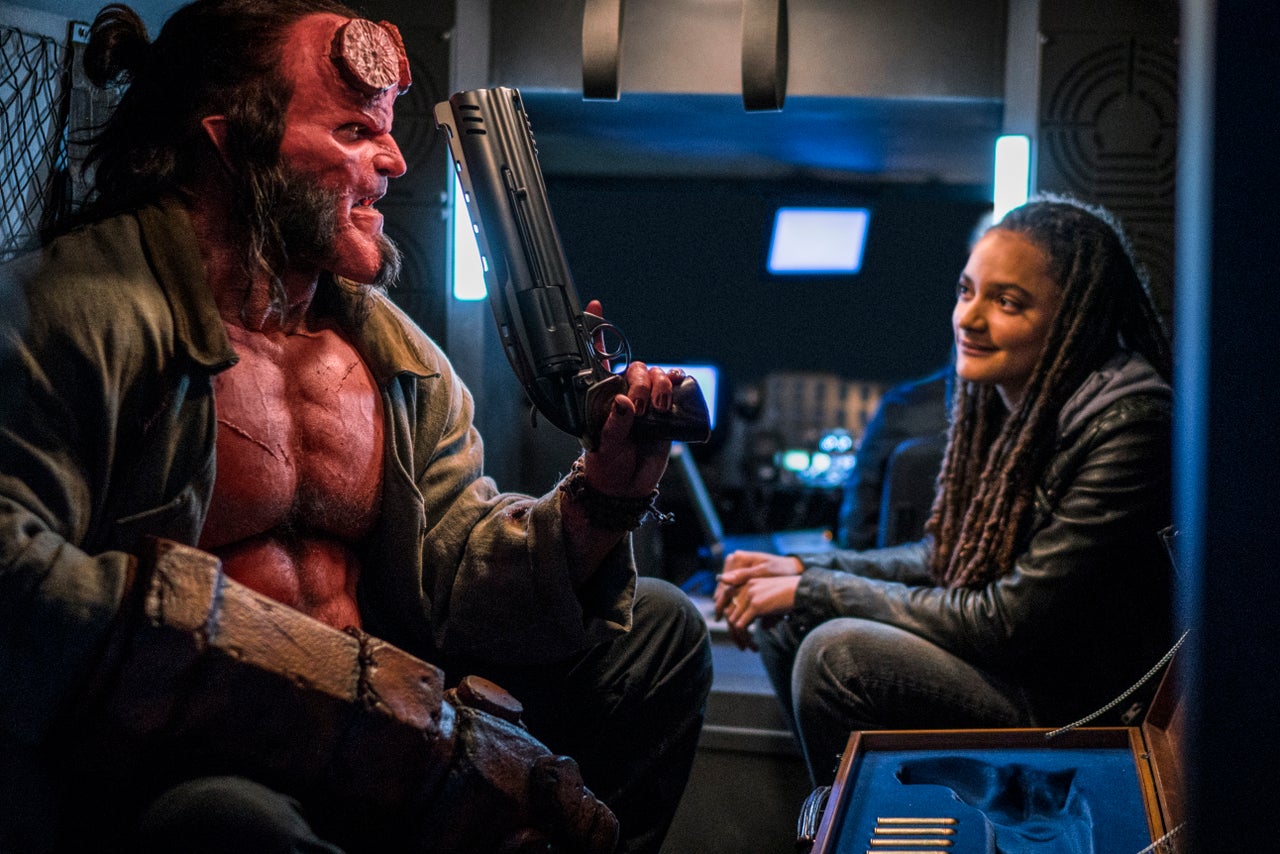 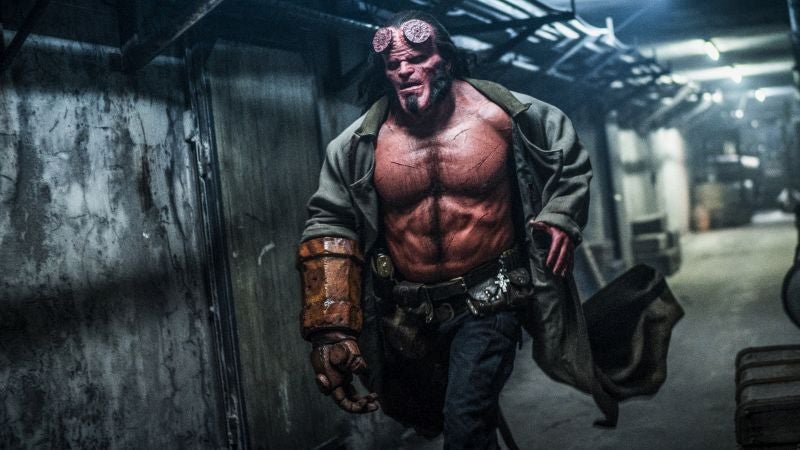 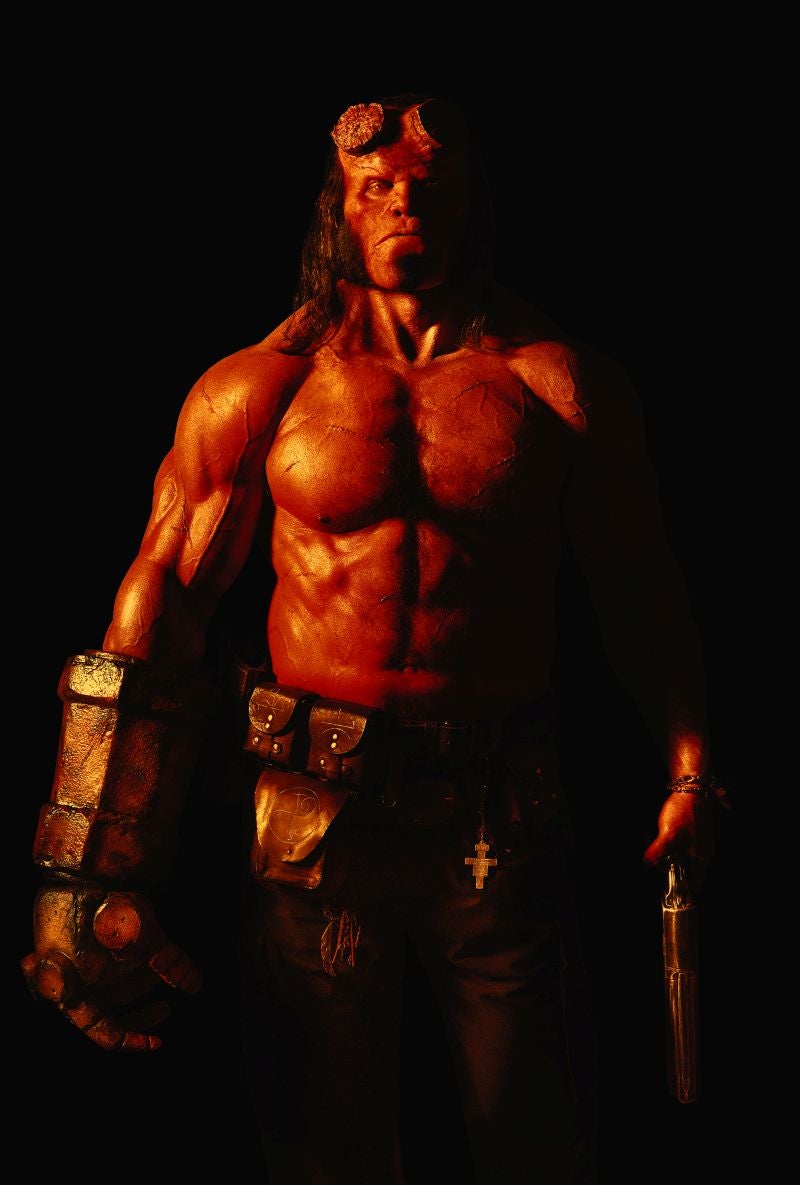 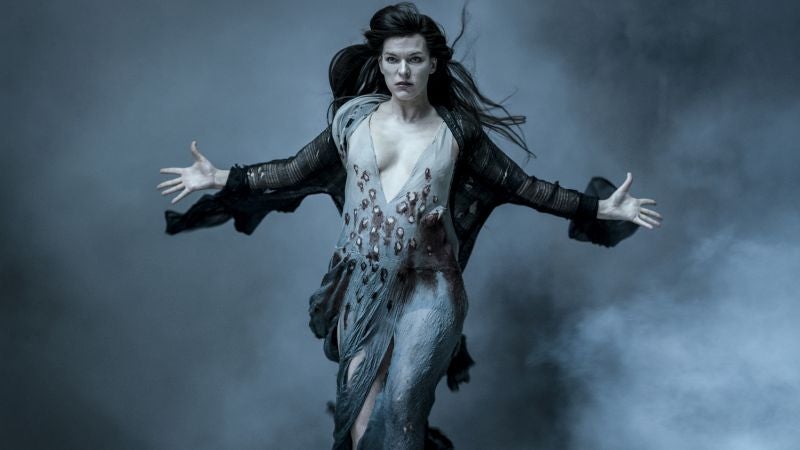 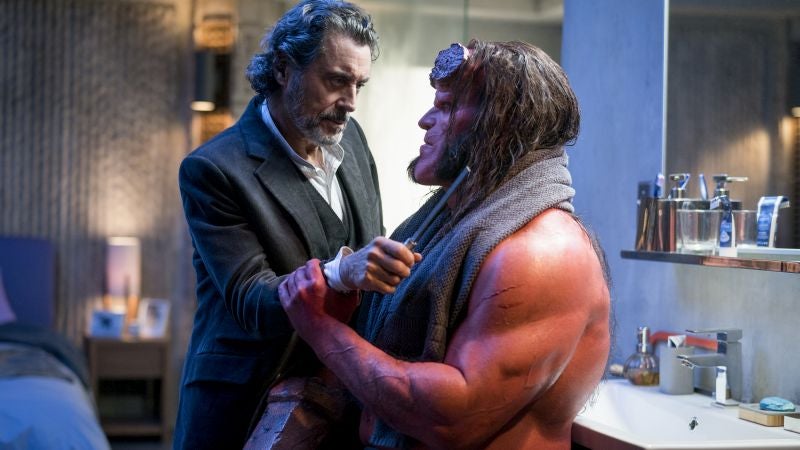 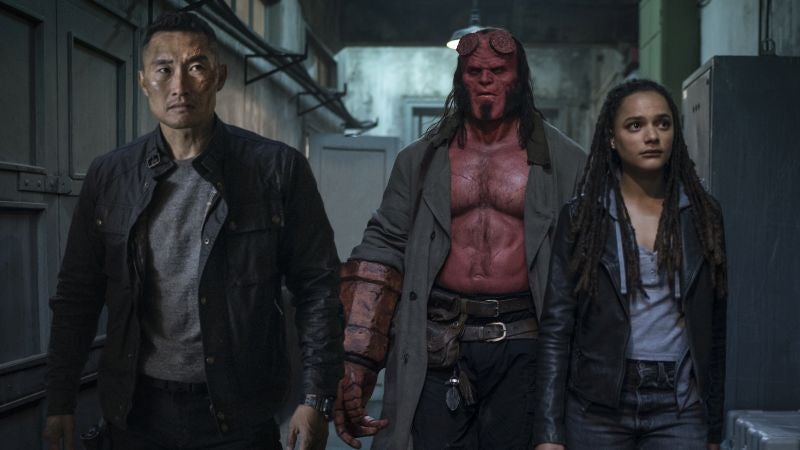 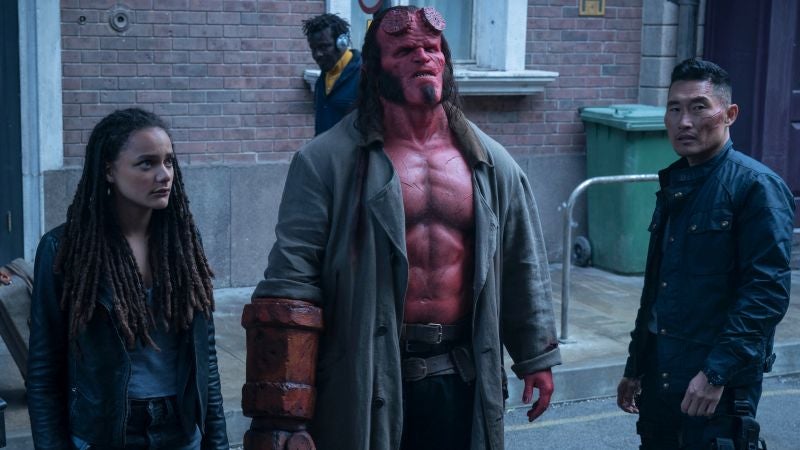 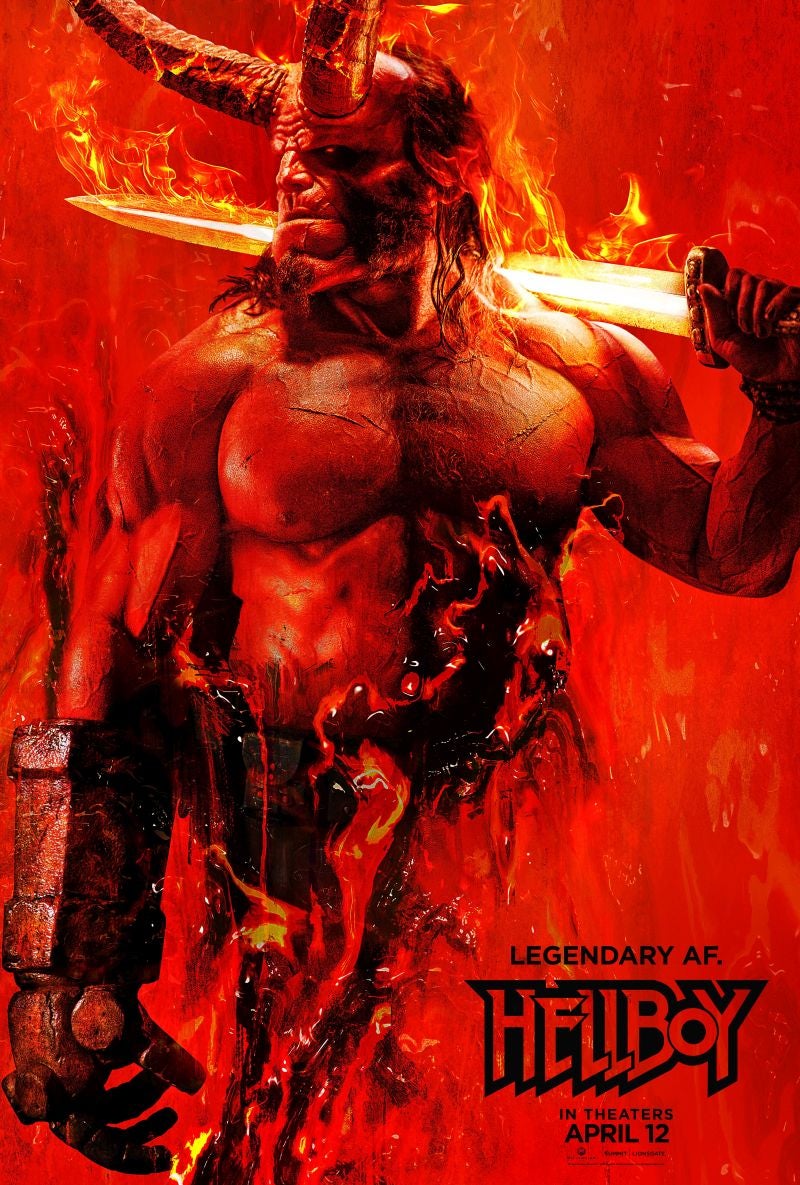 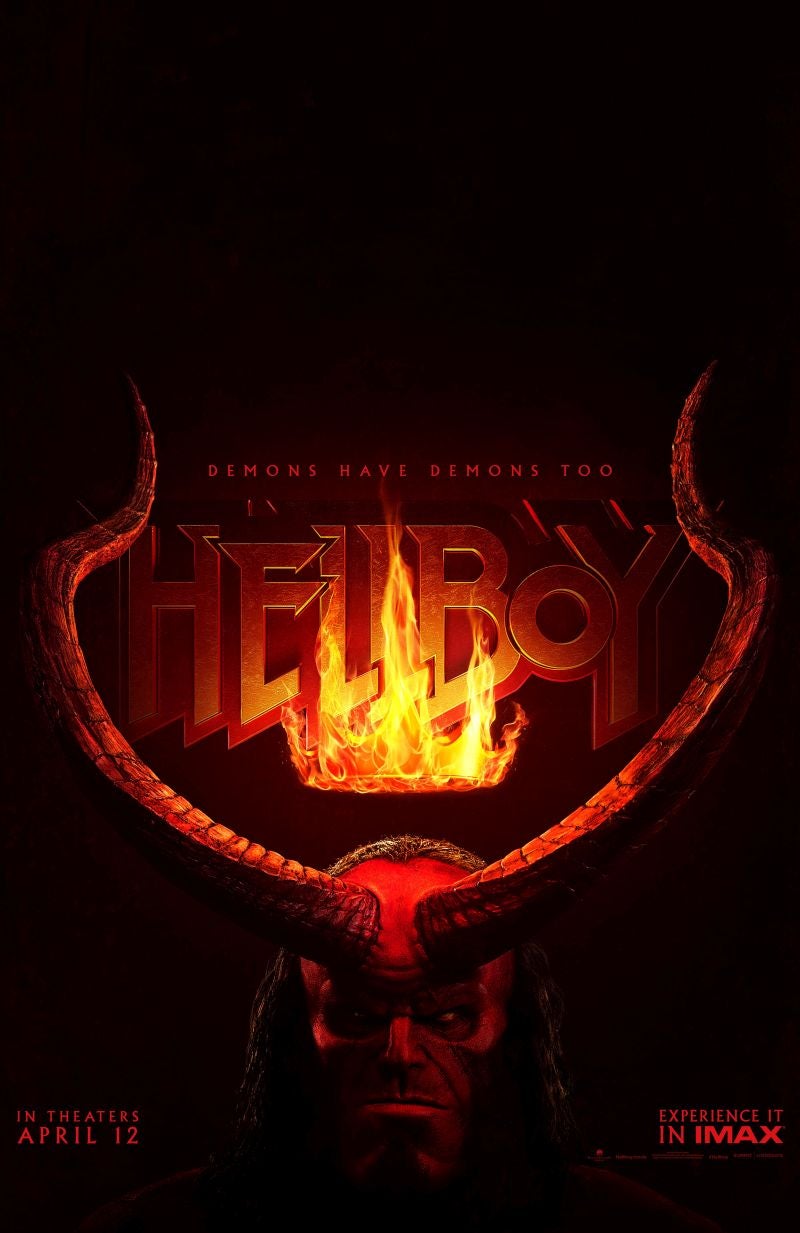 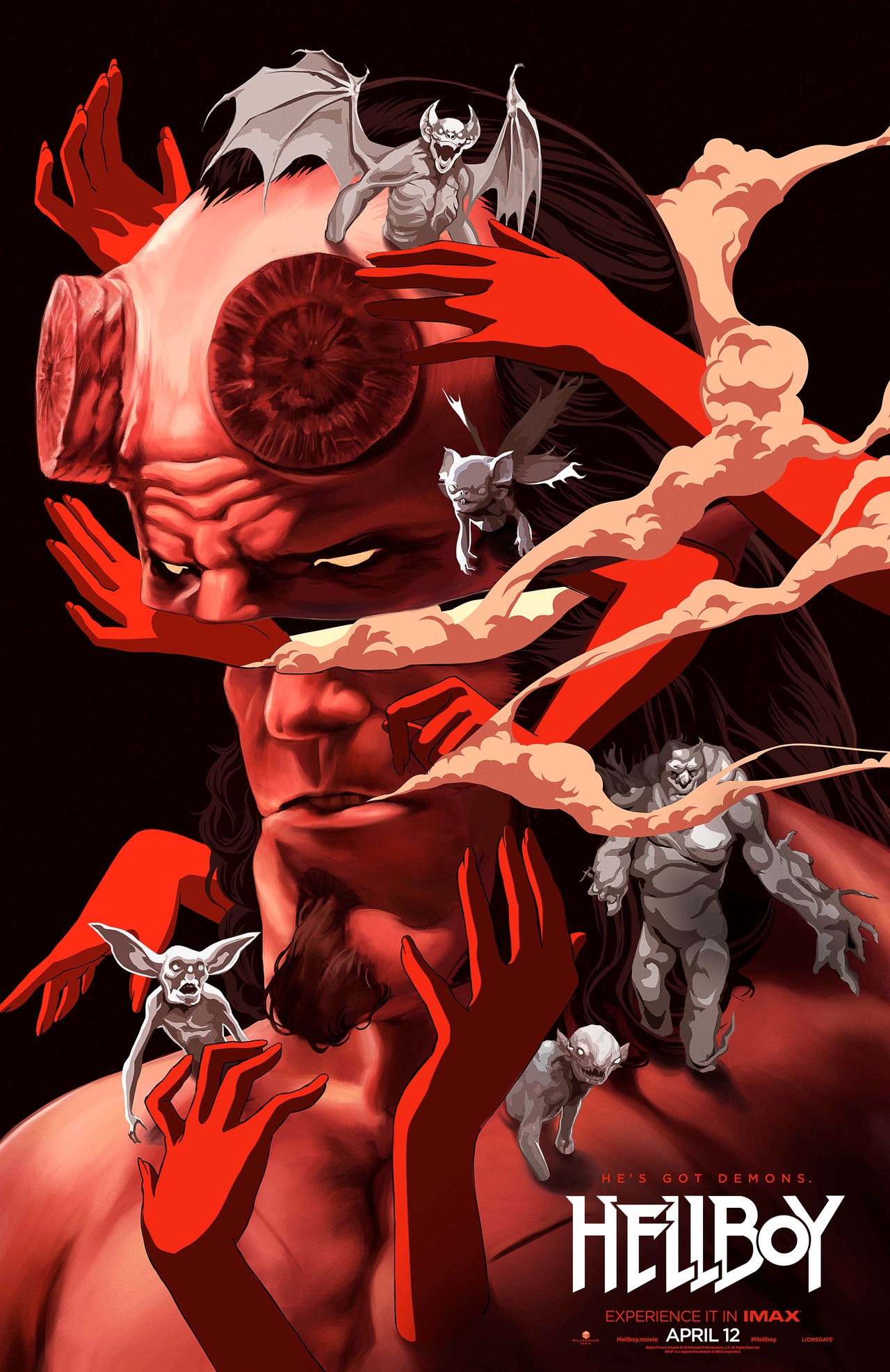 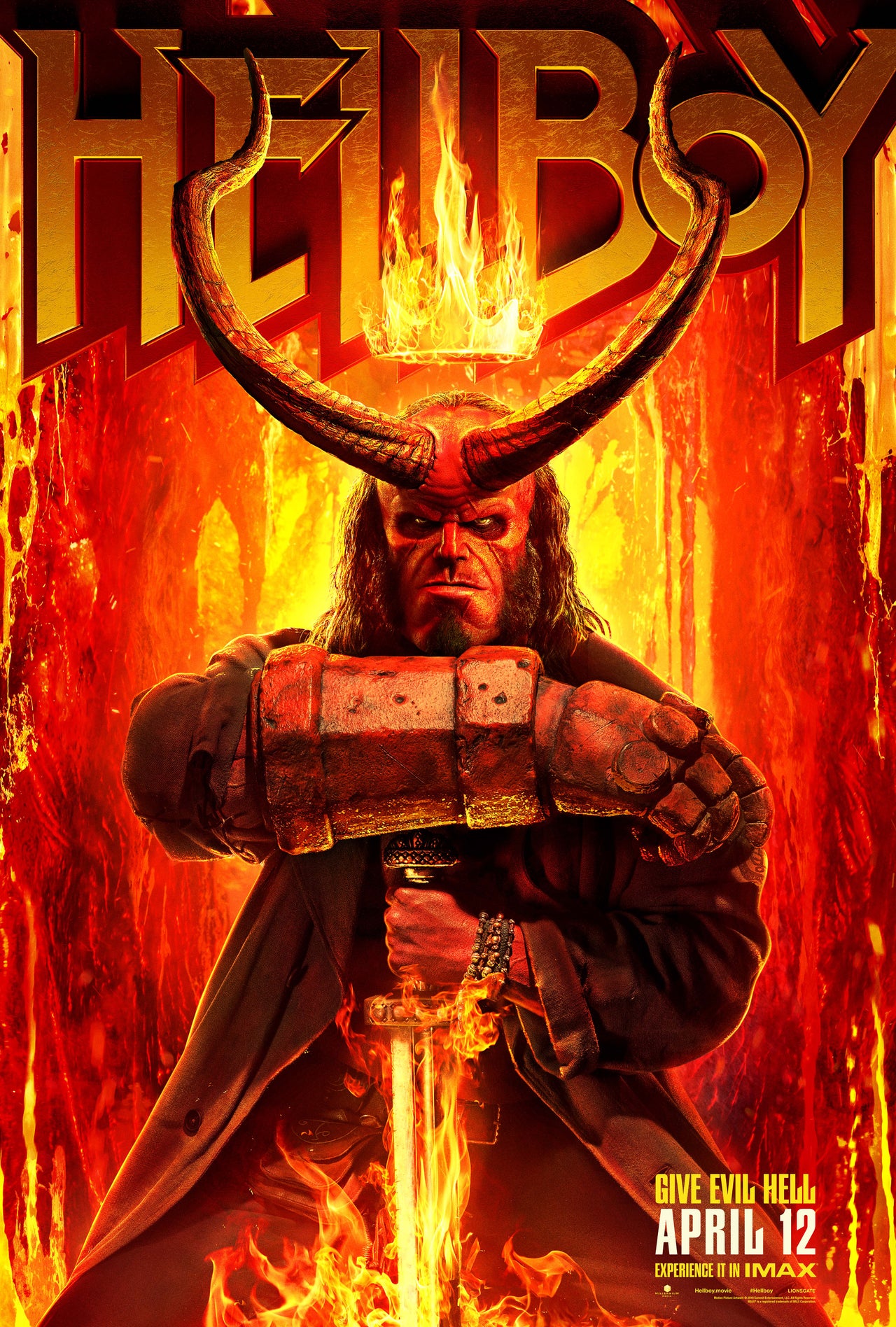 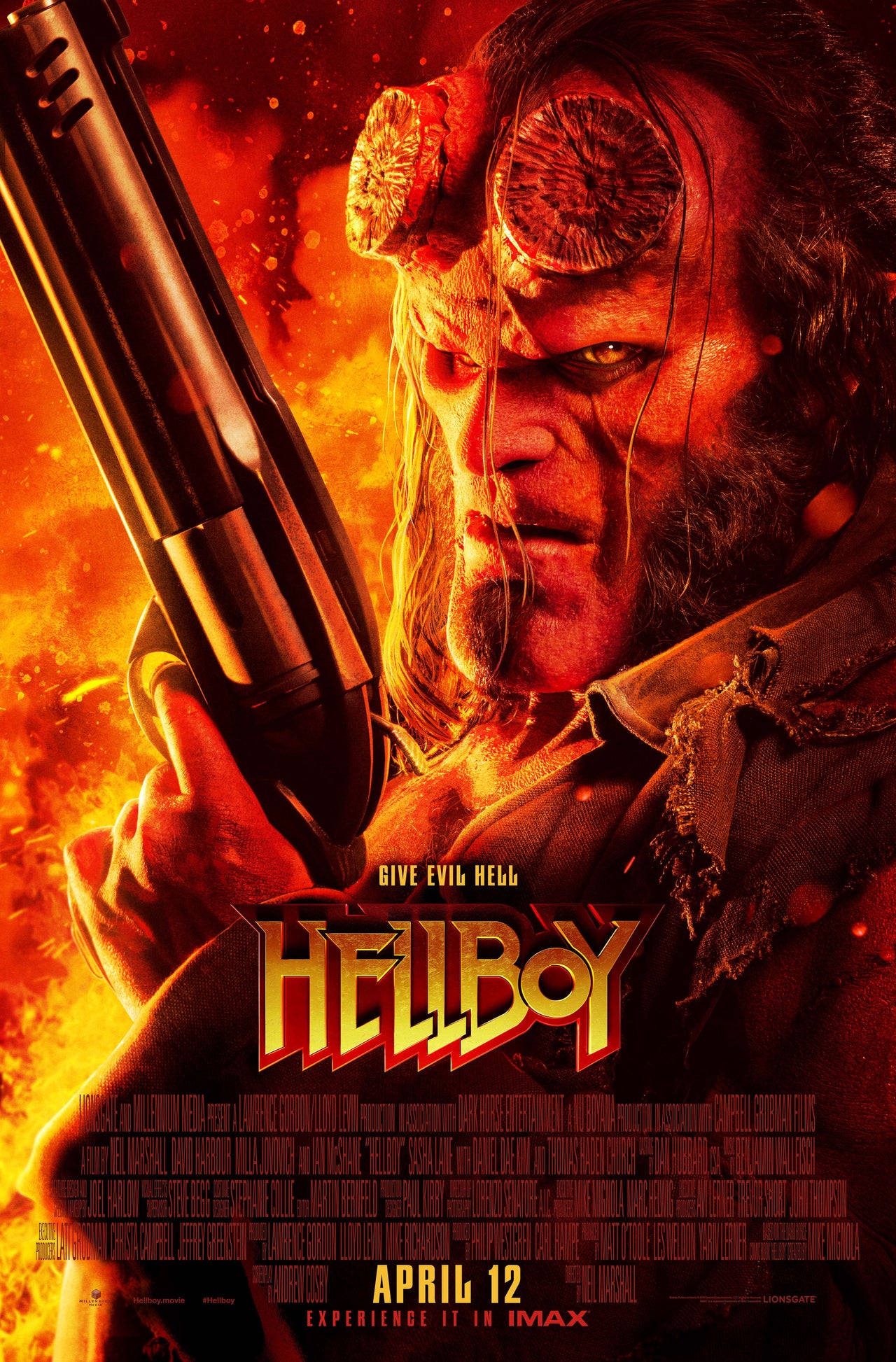 The story itself tries to be much more faithful to the Hellboy comics than the Del Toro duology, but suffers from a completely unfocused series of intertwining plots. Sure, they’re all plots that Hellboy readers will likely recognize, at least in part, but the finished product feels a bit like comic book salad, various ideas and concepts from the books cut out and pasted together ransom note-style.

Nimue wants to wipe out humanity, but she also wants to marry Hellboy, who is struggling with a prophetic destiny which has him on the hit list of every paranormal society in the world (of which there are apparently many). Oh, and there’s a changeling monster he defeated some twenty years ago who wants revenge now for whatever reason, giants are terrorizing England in an unrelated incident, vampires are in Mexico, and a bunch of Arthurian legends also crop up just for good measure, because apparently that wasn’t enough going on already.

Add to the clutter of the plot some truly embarrassing CGI–and virtually all of it is CGI, there are maybe two practical effects in the movie outside of Harbour’s costume and makeup–and you’ve got a real recipe for disaster. There’s really no other way to say it: the movie looks cheap. Sometimes there’s the sense that cheap is what it was going for–there’s a certain sort of Army of Darkness-flavored B-movie sensibility to a handful of scenes–but the gags and the jokes never land well enough to actually sell the self-awareness. Other scenes and characters just look downright dated, to the point where the terribly green-screened edges and horribly rendered monsters actually seem distracting.

And if that weren’t enough, the editing makes the first two acts feel like music videos. Nearly every location change is heralded by a music cue, usually a song with pointed use of the word “devil” in the lyrics and twanging alt-rock guitars. You know, just to make sure you’re really understanding the theme of the movie you’re watching.

At the end of the day, there are a couple of charming moments and clever ideas that keep Hellboy from being a complete wash — a handful of the creature designs, for all their sloppy CGI, are genuinely pretty neat and one or two of the paranormal powers showcased are pretty interesting in concept. But why spend the money and take the time when you’d do much better to just watch the Del Toro versions again from the comfort of your living room?

Hellboy is a thin, clumsy, and charmless attempt at rebooting a beloved franchise. It’s populated by forgettable characters motivated by confusing stakes, cheaply executed visuals, and distracting editing. Somewhere, a finger on a Hellboy fan’s monkey’s paw is curling up — sure, HB might finally be back in the spotlight, but he definitely would have been better off left alone.