Waste not, want not seems to be Disney's policy as it diligently works through its schedule of live-action remakes of its animated classics.

The latest, Aladdin, is British director Guy Ritchie's take on the studio's 1992 animation, which won an Oscar for its music, along with two Golden Globes – one for composer Alan Menken, the other for Robin Williams' inimitable turn as the voice of the Genie. As soon as he emerged from 10,000 years of incarceration inside the lamp, cheerfully complaining of a crick in the neck, the film was his. 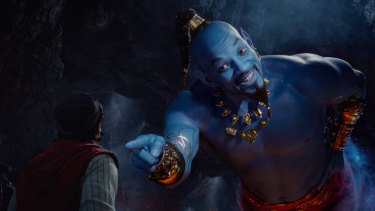 Will Smith plays the Genie in the live-action adaptation of the 1992 animated classic Aladdin.

Sword and sandals epics inspired by the 1001 Nights have entranced movie-makers since the silent era, when Douglas Fairbanks put on hoop earrings and harem pants and went capering across the Middle East in Raoul Walsh's The Thief of Baghdad.

In 1940, the film was redone by British director Michael Powell, winning Oscars for its art direction and special effects. Then came its Disneyfication, with the thief renamed Aladdin, but it's the Genie we remember.

Williams' free-associating monologues and headlong delivery set the pace of the action, leaving you little time to dwell on the banality of the love story or the formulaic nature of the other characters.

Will Smith is almost as energetic, playing Ritchie's Genie as a brash, wise-cracking man about the desert who's happy to instruct naive young Aladdin (Mena Massoud) in the all-important business of making each wish count. Be specific, he says. "The deal is in the detail." He could be Alec Baldwin channelling Trump.

Nonetheless, he applies himself to the prevailing hokum with such enthusiasm that he eventually wins you over.

Ritchie, an unlikely Disney recruit, given the toughness of his crime movies, does the same. He fixes the mood with an opening sequence which takes you with Aladdin as he goes out to pick pockets in the bazaar and his acrobatic adventures are choreographed with such verve that it's like watching Fairbanks on fast forward – except that Fairbanks didn't sing or introduce breakdancing to the Sultan's court, as Massoud is about to do. 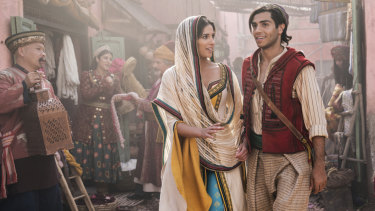 Naomi Scott as Princess Jasmine and Mena Massoud as Aladdin.

And a Fairbanks Aladdin would not be tolerated in these sensitive times. The film's publicists are eagerly claiming that this is Disney's most ethnically diverse cast yet. Massoud is an Egyptian-born Canadian and although Naomi Scott, playing his love interest,] Princess Jasmine, looks and sounds English, her mother is from a Gujarati family.

That still puts her a long way from Arabia, Persia or anywhere else in the movie's general vicinity, but Disney has cleared up that problem, as well, with the information that Princess Jasmine's mother also came from southern Asia

The film's palette is best summed up as "anything goes". It's a blinding celebration of saturated colour with a production design wrapped around a preponderance of golden domes, carved pillars and filigree screens.

But every now and again, you get a chance to rest your eyes on gently rolling sets of sand dunes symmetrical enough to have delighted the gaze of David Lean's Lawrence of Arabia. 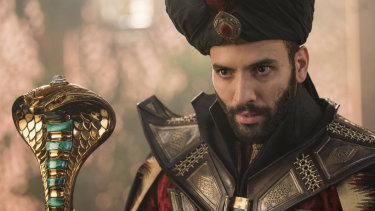 And Aladdin and Jasmine do seem to be having fun together. The agile Massoud has a soulful charm and Jasmine belongs to Disney's present line of feminist princesses. Instead of wanting to marry a prince, she wants to succeed her father as Sultan, but the wicked Vizier (played with absolute conviction by Tunisian-Dutch actor Marwan Kenzari) has ambitions of his own and keeps her penned up in the palace.

Menken, who's updated his original score, has given her a generous opportunity to pour out her frustrations in a new soaring ballad, Speechless, which is one of the musical highlights.

In all other respects, it's pretty traditional – a throwback to the 1950s and the heyday of the MGM musical, when various countries and cultures were packaged into vibrant confections of song, dance, exotic sets and costumes and made over into Louis B. Mayer's relentlessly wholesome vision of the way the world should be.

That's the Disney philosophy, as well. And Ritchie has come up with something that fits right in.