Much has been made about the therapy-meets-art process of “Honey Boy,” which actor Shia LaBeouf wrote while exploring his traumatic childhood in court-mandated therapy and rehab. The writer-actor even went so far as to play his father in the film’s flashbacks. Yet what’s fascinating about the making of “Honey Boy” is how those filmic connections made between LaBeouf’s past and present evolved over the course of making the film.

When “Honey Boy” opens, we meet present-day Otis (Lucas Hedges, channelling LaBeouf) on the “Transformers” set, his emotions spiraling out of control as he hits rock bottom. Mirroring LaBeouf’s own experiences, Otis is arrested and ends up in rehab. The film then weaves between present day Otis, doing the hard work of therapy and healing, with flashbacks of the past he is trying to reconcile — specifically a time when 12 year-old-Otis (Noah Jupe) was living with his abusive and alcoholic father (LaBeouf).

LaBeouf’s script was linear, moving through the story in chronological order, and director Alma Har’el followed that trajectory during the production: The audience wasn’t introduced to Hedges’ adult Otis until over an hour into the film. However, when editor Monica Salazar started to assemble scenes during production, she realized that the footage had untapped potential. While she waited for Har’el to join her in the editing room, Salazar started to experiment with cutting footage of young Otis into the older character’s therapy scenes. 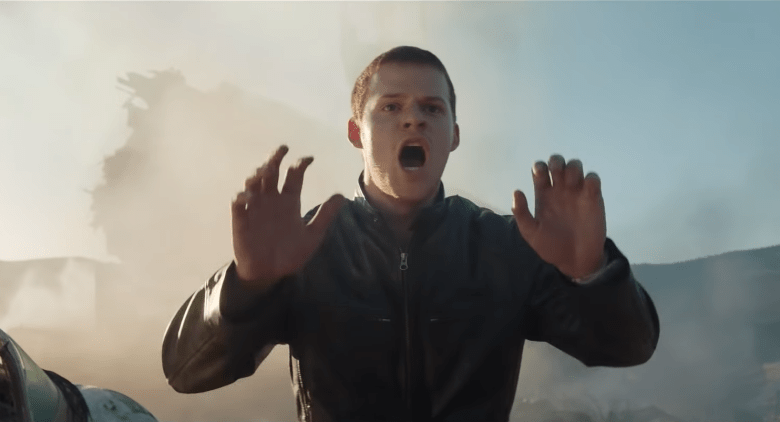 “As we were watching ,it became very clear that by doing the intercut, the story of Otis and the healing process, that the past was pushing the present forward,” said Salazar. “And those connections were much more resonant once you put things together and intercut them. That was just the magic we found in the edit room.”

Salazar’s realization didn’t surprise her director, who — along with cinematographer Natasha Braier — started to sense a strong connection between the story’s two halves while shooting LaBeouf and Jupe’s scenes during the backend of production.

“When I edited the film I really felt that understanding the context of why you are even telling the story of this kid, why you’re going through that world, was so much more powerful when it was told after you saw the older Otis and you realized that this is a peeling of the onion act,” said Har’el, while she was guest on IndieWire’s Filmmaker Toolkit back at Sundance, where the film premiered. “Really when you think about it, this whole thing was written like that. It was written by older Shia, as an act of trying to understand what made him [end up] in the situation where he’s diagnosed with PTSD: What was the trauma? Where was the anger coming [from]? Where were these problems with the male figures in his life rooted in? So once we started [intercutting scenes], it kind of really felt better.”

Subscribe via Apple Podcasts to the Filmmaker Toolkit Podcast

For Har’el, who had made two feature length documentaries (“Bombay Beach,” “LoveTrue”) before “Honey Boy,” this concept of writing (or, in this case, re-writing) the film in the editing room came naturally. The filmmaker and Salazar figured out how to take the film to the next level. The struggle came from the mechanics of weaving between past and present — specifically, when to introduce Hedges’ adult Otis, as the film’s original opening went unchanged for the first few months of the edit.

“For a long time, we were still starting with younger Otis and playing with introducing Lucas’s character around minute 30, then minute 20, then minute 15, until suddenly there was a moment with, ‘What if we start with adult Otis?’” said Salazar. “The arrest story is what triggers the rest of the story, and suddenly it felt right.”

In its final form, the film opens with Hedges being snapped back on a safety harness, while shooting an explosive action scene. It’s such an absorbing moment that it’s hard to imagine any other starting point. That was a key breakthrough for Har’el and Salazar, but it came only 24 hours before Har’el handed in her director’s cut.  “Alma has a beautiful style of shooting emotion, very poetic visual stuff,” Salazar said. “We were lucky in the edit room that the footage Natasha and Alma shot talked to each other..”