Piers Morgan, 54, and Susanna Reid, 49, were on hand to oversee proceedings on the ITV show today, discussing a whole manner of topical subjects. The pair often joke and have light-hearted squabbles when hosting Good Morning Britain. This morning was no different as the former snapped at his co-star for taking his lines on the auto-cue.

The clash came at the top of the hour as the programme returned after an advertisement break at eight o’clock.

It seemed Piers was preparing himself to introduce GMB viewers to the show if they just tuned in, but it seems his co-star had other plans.

Apparently, according to the former, he was supposed to read the opening line on the auto-cue and wasn’t too happy with Susanna jumping in.

As she did, her co-host made it abundantly clear he was not best pleased and stated he “always” opens the show. 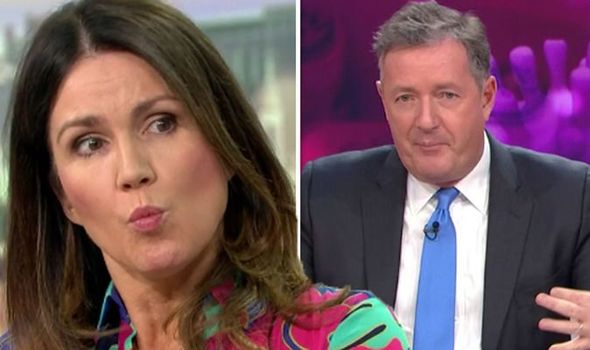 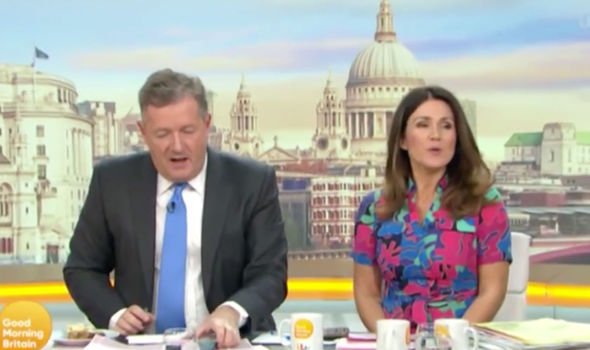 As the theme tune played out, both hosts went to give the opening line, but it was Susanna who said: “Good Morning Britain, it’s eight o’clock.”

Dismayed, her co-star replied: “Hang on, that was my line,” to which she replied: “You’ve got other lines.”

“How dare you introduce the show to the nation at eight o’clock,” Piers declared as his co-host revelled in glee at annoying him.

The presenter reiterated: “You insert other lines in the programme,” referring him interjecting his own questions and thoughts during debates and interviews. 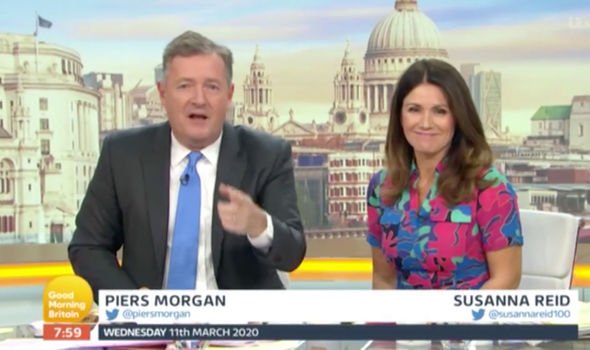 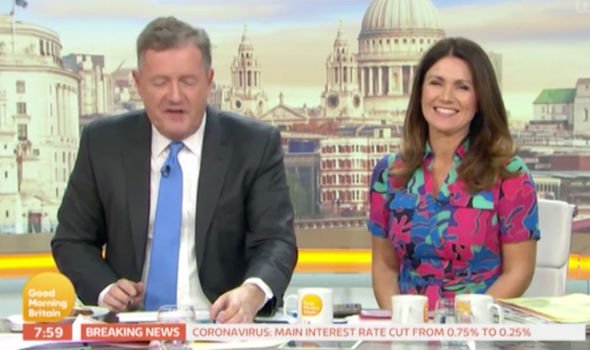 Piers quickly moved the programme on as he discussed a story making the headlines.

Another subject which perked the presenter’s fury this morning was the outbreak of coronavirus sweeping the UK.

As a result of the COVID-19 virus spreading rapidly, there has been much debate on whether sporting events and social gatherings should go ahead.

An upcoming game between Arsenal and Man City has been postponed after it was confirmed Olympiakos owner Evangelos Marinakis had contracted the disease and met several Gunners players a couple of weeks ago.

Despite being a supporter of Arsenal, Piers agreed with the action taken to try and prevent the spread of the virus.

In the midst of the show today, the host said: “What I think is really important now – people are still saying on Twitter, ‘Stop scaremongering.’

“No. Let’s just park all that nonsense to one side. This is not scaremongering, this is real,” he continued.

“Italy, the entire nation has been locked down, it is in meltdown and we need to expect similar stuff to come here.”

“And we need to deal with it in the same way that our predecessors, our ancestors, dealt with a similar crisis like World Wars.

“We don’t know what the full repercussions are going to be and we have to be sensible.

“We also have to put our own please, by the way, to one side – if you miss a few football matches if you can’t go to the cinema and watch TV at home, suck it up,” Piers stated.